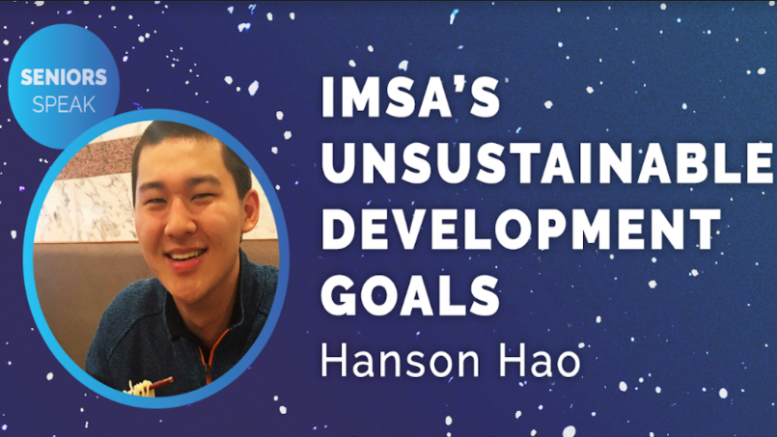 One of the sections included in the annual Senior Edition is a series of essays titled Seniors Speak. These works are written and submitted to The Acronym by members of the graduating class, allowing them to reflect on their experiences, share advice, and advocate for change. The writer of this piece is Hanson Hao (Stanford University ’23), who lived in 1504A for his senior year. Hanson played quiz bowl for all three years of IMSA and became nationally recognized for his prowess.

The IMSA community has been hearing a lot about the United Nations’ Sustainable Development Goals (UN SDGs), a collection of global objectives to be met by 2030, for about a year now—they’ve been in my mind ever since I found the 17 goals plastered onto a wall for the 2018 ISSF. While IMSA should be commended for its attempt to use the SDGs to push us towards globally relevant problem-solving, the merits of the SDGs, as currently implemented, are simply far outweighed by their drawbacks. Let’s focus on the two main shortcomings of IMSA’s usage of the SDGs: vagueness and a restriction of intellectual freedom.

In short, the SDGs are leading IMSA down a questionable path, ensuring that we will be running in idealistic circles instead of climbing the stairs of educational excellence and intellectual advancement.

I’d like to thank the IMSA Acronym for giving me the opportunity to write this. It’s wonderful that you continue this tradition for all the departing seniors every year.

Seniors Speak: How to Win Clash (It’s Easier Than You Think)

Be the first to comment on "Seniors Speak: IMSA’s UNSustainable Development Goals"