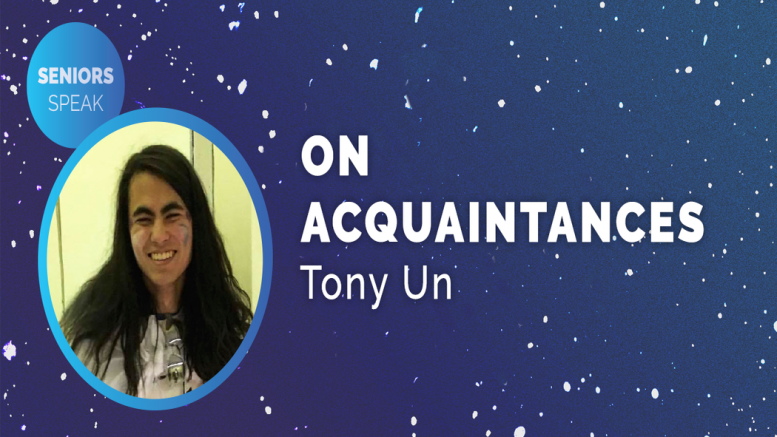 One of the sections included in the annual Senior Edition is a series of essays titled Seniors Speak. These works are written and submitted to The Acronym by members of the graduating class, allowing them to reflect on their experiences, share advice, and advocate for change. The writer of this piece is Anthony Un (Arizona State University ’23), who lived in 1507B. He competed in speech throughout his time at IMSA.

I spent the first two months of IMSA trying to figure out how to break it to my parents that I was going to come back home.

The workload was intimidating, the people were terrifying, and frankly, I wasn’t very good at meeting new people. I still struggle with it, to be honest. There’s a fear that accompanies speaking to people that you perceive as smarter or more talented than yourself. The fear turns into a constant thought, that’s never quite enough to bring it up in conversation, with friends or teachers. It’s not uncommon for most IMSA students.

Given that, I’ve spent the next three years slowly trying to figure out why I stayed.

A part of it is in my closest friends, whose simultaneous brilliance and profound lack thereof continues to astound me. Part of it is the opportunity to continue to work, learn, and grow. Both of these things have been constant joys since I started getting used to living away from home, but a surprising amount of the reason I stayed is in people I’ve never really held a full conversation with, or those that I wish I had the courage to greet in the hallways. These unexpected experiences have only continued to grow on me as these three years have slipped by.

The advice that I have is to embrace the wonder to be found in these strangers. Those who have inspired me the most to keep working, or to pick up new hobbies, or to just get out there and try, have been people who have practiced what they love. I have learned that it isn’t just natural, magical talent that allows people to be successful, but hours put into everything, from music to mathematics. That realization has only made their success more impressive. Moving from stranger to acquaintance, and occasionally to friend, has shaped me into the person I am at the end of the journey.

And, even though there’s so many of you that I don’t greet in the hallways for fear of a mistake during the interaction, it warms my heart to think about all the people I’ve met, and the amazing things I’m sure they’ll do. If there’s any advice I can leave you, it’s this: even though you can’t meet everybody, even if you can’t go too far out of your comfort zone, make friends. Make acquaintances. Let your heart swell when you hear their voices, even if you’ve only ever been in the audience. Be proud of their accomplishments, and try not to worry whether you could fill their shoes. Don’t be afraid to have love for others, no matter how close they are to you.

The admiration I hold for all of you at IMSA no longer twists in my mind until the edges dig into my insecurities. We are privileged to be at an institution where this is even an issue. It won’t last forever.

Seniors Speak: How to Make a Friend!

Seniors Speak: Confidence and A Dash of Hope

Be the first to comment on "Seniors Speak: On Acquaintances"