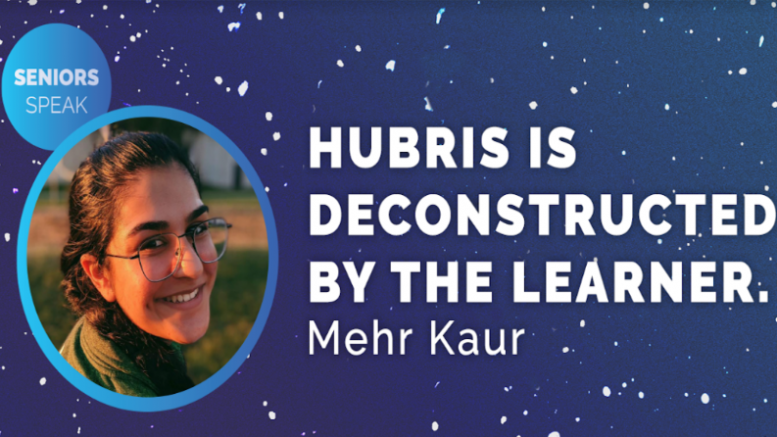 One of the sections included in the annual Senior Edition is a series of essays titled Seniors Speak. These works are written and submitted to The Acronym by members of the graduating class, allowing them to reflect on their experiences, share advice, and advocate for change. The writer of this piece is Mehr Kaur (Columbia University ’23), who lived in 1506B during her senior year. She was on PME board for all three years of IMSA.

Describe IMSA. What do you think of? The students that make this place a home, the teachers that inspire us to explore new fields, or the clubs and sports and events that fill our weeks? Or maybe all that gets overshadowed by an oblivious administration, IN2’s bureaucracy, and unfair teachers. Here’s my take: all the issues in that last sentence wouldn’t be issues at all if we were a little less arrogant—but we’ll come back to that in a second.

On my first day as a sophomore, I remember my Nav leaders telling us we would have to be OK with not being the smartest kid in class. Despite this being repeated so many more times during early move-in week, I didn’t realize how true it was until classes actually started. For the first time, I felt like I had no idea what I was doing in school, and I doubted if deserved to be here. For a lot of us—or me, at least—our identities before IMSA depended on being the “smart kid,” and coming to IMSA was a shock of inadequacy and lost confidence. Over the next few years, though, we all discovered new passions, found our own “things,” and developed new identities. We strove to become res life leaders, directors, and presidents. With the number of student leader positions IMSA has, so many of us felt like we had authority and responsibility over something larger than ourselves. We were told we can solve the world’s biggest problems and “advance the human condition.” In effect, the confidence lost in one field was gained back twice over in another, letting us bounce back without too much of an ego blow.

In fact, somewhere in that process of personal growth, the combination of our fantastically supportive community and the plethora of novel opportunities molded us into students that have the arrogance to believe we know better than anyone else—that we could run a club, SIR, IN2, or even IMSA itself better than the authority figures in place. I’m guilty of this too; I’ve stood in Fermilab on an I-day and discussed the flaws of the SIR program, challenging authority where I had no experience–not to mention taking for granted opportunities most high schoolers never get. If we’re honest, we’ve all done this to some extent.

But we, the student body, remain unaware of the obstacles that stand in the way of a perfect IMSA. We can complain about money being spent on Sodexo renovations or new decorations for ISSF, but that doesn’t change the fact that grant money can only be spent on what it’s allocated for. So, let’s finally return to the first paragraph. We should ask ourselves, who are we to act as if we know all the activities and efforts of admin? How are we so arrogant that we think IN2’s project team requirements are without purpose? Or that we can instruct and grade better than our teachers? It’s easy to complain about IMSA’s shortcomings, but giving credit to those who make IMSA possible fosters more positivity and productivity.

That’s not to say we should ignore IMSA’s faults and accept it as is; by all means, work towards changes you want to see on campus in whatever way you can. Having the courage to stand up for what you believe in is an admirable quality, just don’t mistake having the confidence to speak up with the hubris to think you know best.

To the sophomores and juniors: I encourage you to appreciate and take full advantage of what you have here at IMSA, to look for the reason and the good even in the flaws of our school. For my fellow seniors, I hope that in college and beyond we learn to search for what we can learn from others rather than obsess over what we can teach them. Until then, let’s all have the confidence to embrace the authority we don’t have, and the humility to let go of our arrogance.

Seniors Speak: On Being Forgotten

Be the first to comment on "Seniors Speak: Hubris is Deconstructed by the Learner"