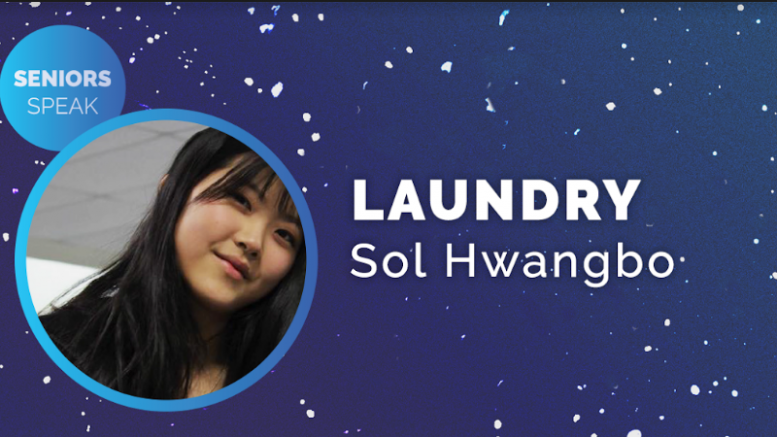 One of the sections included in the annual Senior Edition is a series of essays titled Seniors Speak. These works are written and submitted to The Acronym by members of the graduating class, allowing them to reflect on their experiences, share advice, and advocate for change. The writer of this piece is Sol Hwangbo (UIUC ’23), who lived in 1506D during her senior year. She was an active facilitator on the LEAD team, and facilitated SocEnt for two years.

Every month, I stand in the laundry room, one hand holding my ten precious dollars in the form of my laundry card and the other lugging my too-full laundry hamper.  For three years, that piece of plastic has been refilled over and over as I’ve stepped into that room repeatedly, always to come out with the same result: a pile of unfolded clean clothes and a card with less money.

And sure, I always ended up with clean clothes, but I was giving two dollars each time over a course of three years.  It felt unfair that I had to pay for my laundry because I couldn’t go home, and soon it started feeling like a small sacrifice when I could’ve bought a bag of chips instead.  At first, I didn’t pay much attention to those two dollars, but as my sophomore year progressed, I started to realize that wasn’t the only thing I was giving up to IMSA.

Busy with club GAs, study hours, and of course school, the hobbies that I had grown into talents over my middle school years suddenly became less of a focus in this new systematic life I had been pushed into.  There was less time for just me but triple the amount of time to focus on problem sets, history readings, and chemistry lab write-ups. It was as if everything I had built up previous to IMSA was so minuscule in comparison — enough for it to sneak away without me noticing.

And so, I was thrown into this vicious cycle of giving.  I gave, and I gave. I gave up my time, my sleep, my energy, my ability to work a little without becoming tired.  I spread myself thin; took on too many classes, clubs, and social events all at once.

Watching our class count dwindle from 229 to 198, each one dropping to find only a more comfortable place back home where they could spend time enjoying their hobbies and develop their talents, leave their house past 10 pm, and sit in the same room with a boy without being suspended.  Seeing them happy and thriving was nice and all, but it made me question my place here.

But even then, when I thought IMSA was sucking up all that I was giving it, I couldn’t bring myself to quit.  As often as I used to say IMSA’s terrible, I now realize it’s anything but that.

The past three years were a blur — busy, hectic, and fun.  Full of the naps on the comfiest couch in 08, the hours of practice at drill, the trips to our favorite stores at Orchard, the infinite rounds of fish and spades and the occasional poker, coffeehouses, and endless hours spent staying up — sometimes working and grinding out that last minute English paper and sometimes spending it with our best friends, hands at our sides, laughing until our stomachs hurt.

I thought I had given IMSA so much, but in reality, I’ve been repaid tenfold.  For all the time I’ve dedicated to IMSA, I’ve found someone in myself that I genuinely like, a much-needed lash of realism, the closest friends I’ve ever had, a feeling of belonging to the best community I’ve ever known, and the knowledge of how to do my laundry.

But, at some point, the learning stops, and it becomes repetitive.  The first couple baskets of clean laundry were the result of my hard effort.  The third basket was pretty easy. The forth was speedy quick. The fifth was a chore, repetitive and tiring.  And that’s how it is for a lot of things — IMSA’s no exception.

IMSA changed me (more than I’d like to admit).  I came in as a nubby soph, sheltered and, quite frankly, a bit annoying.  My first year at IMSA, I fell down the slippery slope of the W curve, finding myself in a battle against stress, FOMO, and sleep-depravity, winning less than I would have liked, but each day, I learned something new about myself and who I was.  The amount of learning I did laid down the tracks for who I am today.

The following year was by far the toughest.  The dark theory that junior year is the worst became a reality for me.  I hardly remember anything other than a select few memories with only ISP pictures to bring me back to happy times; everything else remains a blank space stained black in my mind.  But even then, I still learned, albeit less than sophomore year.

And, although senior year has been by far my favorite, I’ve hit a plateau of learning, with only so much time before it flatlines.

We’re now filled to the brim with new knowledge with only so much more IMSA can provide, and on June 1st we will leave with full arms, carrying all that we’ve been given.  And I think it’s best that way, because we’ve gone through the playground slide too many times to feel the exhilaration of the first. As thankful as we are, we’ve outgrown IMSA: whether we like it or not.  We gave and IMSA took but then gave more back, enough for us to go adventureout into the world on our own.

So now we sit on the cusp of something new, yearning to learn more and ready to travel to new places and impart all that we’ve gained here to those elsewhere.

To both those who have hit that plateau and to those who haven’t, stop and breathe a little.  Sit back and take everything in. Put down the telescope and look at the entire night sky for once, because IMSA’s more than just a boarding school; it’s one that teaches you how to do your laundry.

Seniors Speak: Confidence and A Dash of Hope

Be the first to comment on "Seniors Speak: Laundry"