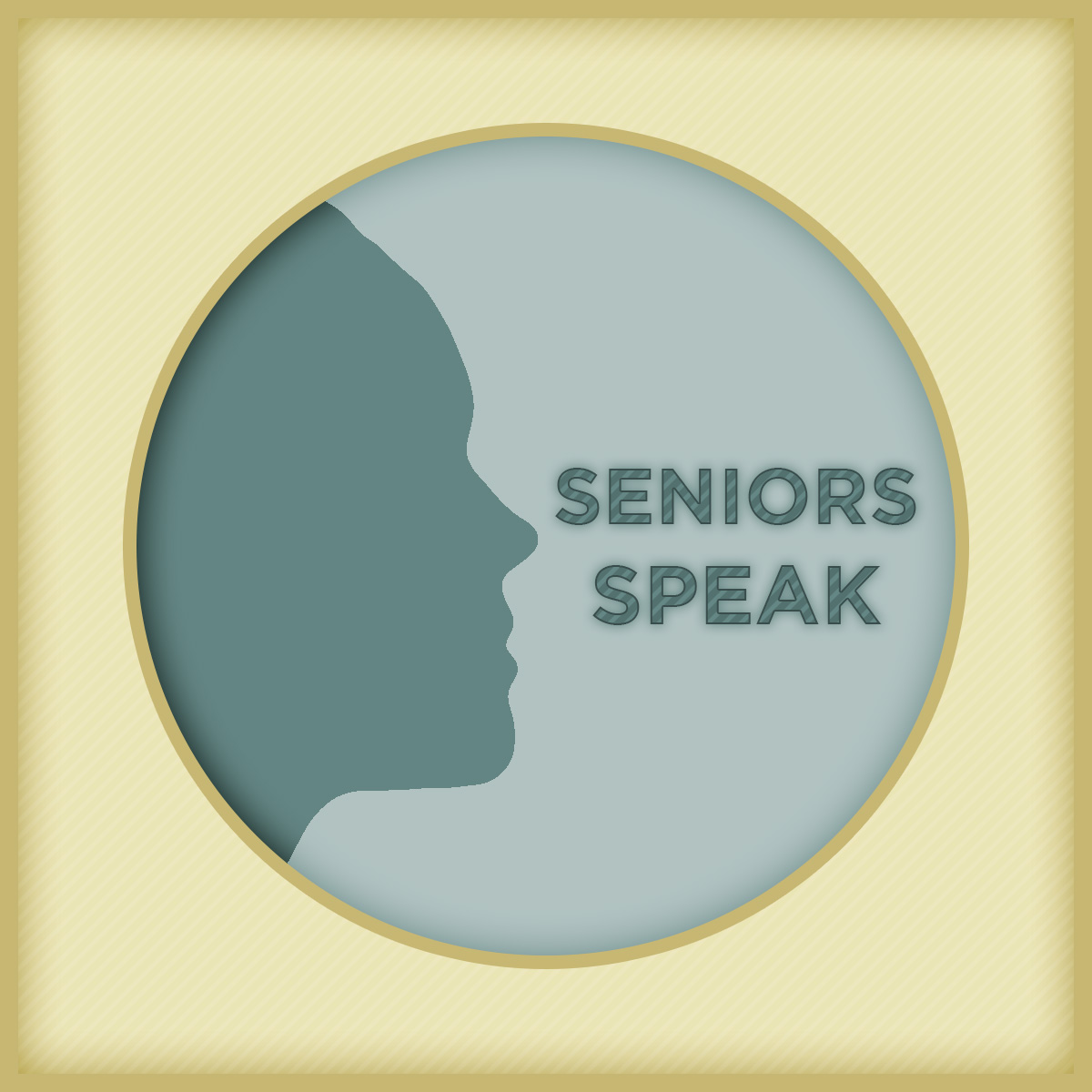 In our eighth Seniors Speak entry, an anonymous writer provides us with a powerful story about one of the most common beverages on the planet.

People’s goals really do tell a lot about themselves. It describes how ambitious they are and what they desire in life. They can be simple, like getting an A on the next BC test, or as difficult as becoming CEO of a large company. Whatever a person’s goal is, it inherently depends on that person’s past, and what has come to define that person. It’s only fair, then, to share one of my ultimate goals: to drink orange juice without thinking about it. Now, this seems simple enough for most people. They do it nearly every morning when they eat breakfast. But for me, this one goal has a long story to it, with numerous factors. However, I’m only going to tell two parts of the story, as I feel the best advice can be gleaned from them.

Now, the first part of my story starts before I was even born. 7 weeks, to be exact. You see, my mother had a few health conditions while she was pregnant with me, and wanted to make sure that nothing bad would come of it. So, what ended up happening was that a doctor prescribed some normal, every-day medication to help her. You know those “Do not take if you are nursing, pregnant, or about to be pregnant” warnings in every medication ad? Turns out those can actually be important, and my mom found out that she shouldn’t be taking the medicine. Unfortunately, she had already taken it a few times, and its effects wouldn’t be seen for another few months. When I was about 4 months old, my mother laid me in my crib for five minutes, only to come back to a blue baby. After rushing to the hospital, she found out what was wrong: I had developed asthma as a result of a problem in my lung’s development 2-20 weeks before my birth. It’s not too hard to figure out what had gone wrong. Not to slander the doctor much, but his one mistake would soon come to govern my life.

Now, for everyone who grew up with severe asthma as a kid, you know how it feels. Everyone always tells you to not push things too hard, or even that you can’t do things other kids can. It hurt a lot whenever I wasn’t able to run the bases fast enough in baseball, and always got out. Heck, I even remember a doctor telling me when I was 8 that I wouldn’t be able to run competitively when I was older. I then proceeded to flick him off while I was leaving, and promised to myself I’d send him a medal from my first marathon (still working on that goal).

With such an attitude, it would make sense that I would beg my parents for any opportunity to get stronger lungs. What could they do but oblige? Thus began my troubles, with a doctor prescribing a 7-year old me a medical steroid and an orange-flavored medication to help with my asthma symptoms. Now, the second medication wasn’t a fully tested medicine, and doctors didn’t have an exact idea as to the amount that should be prescribed to children. So it was, that I ended up taking the dosage that is now prescribed to adults for 5 years.

Now, the chances of having side effects from any drug are greatly increased by overdosing, and this situation was no exception. It’s hard to imagine that such a tiny pill could cause depression, especially in a bright 10 year old kid. What’s worse was what happened after I found out that I was overdosing. It turns out that I was addicted to the drug too. I still had an extra bottle from before, and I remember trying to throw it out. Of course, it didn’t happen. It sat there, tempting me every day to start taking it again. Now to be honest, I don’t remember if I ever gave in. But what I do remember is how much hell I went through going through withdrawal from that drug. Of course, the depression I still had didn’t help much either, and my life was a complete mess.

Now, before this turns into much more of a sob story, I’d like to take a minute to actually say why I’m writing all of this. I would like for IMSA students to learn from what’s happened to me, so that they can (hopefully) lead what they feel is a more fulfilling life. The first point I would like to make is on mistakes. Everyone makes them, including professional doctors, and they can hurt other people a ton. But, it’s important to learn how to always forgive people for their mistakes, and to try and take a moment to see it from their point of view. Now, this certainly doesn’t excuse people for making them, but it does help to relieve pent up feelings to others.

A problem I’ve noticed with seniors, and IMSA students in general, is their incredible ability to ignore the long term consequences of their actions. I’ll take the more specific case of seniors’ “YOLO” attitude, and call them out for it. Now, I’ve always wondered how my life would have turned out if any number of doctors had not made simple mistakes with things they learn about in med school. I always wonder if they might have taken a break in their studies. I always wonder if they ever thought about YOLOing one test, culminating in a series of problems for me. Perhaps I’m taking this too far by comparing med school to high school. I mean, sure, we’re only in high school right now, but that sort of mindset of giving up towards the end can stick around for the rest of your life. It just bothers me, because I feel students don’t take the time to think about how that might affect other people in the future. Maybe if that first doctor hadn’t forgotten a simple duty and checked to see if my pregnant mother could take the medication, my life wouldn’t have been as difficult. So, my advice to next year’s seniors is this: don’t YOLO. And for that matter, don’t care too much about grades: focus more on learning the material properly and thoroughly.

Part II. Up and down.

Alright, so now I’m going to backtrack a little bit to when I was a little tyke. My family moved around a whole lot. Needless to say the smart new kid was always made fun of. Now, I never really found it hard to deal with, as I normally managed to find one really good friend. Well, this always came around to me leaving this one person, who I had built up such a good relationship with. It hurts a lot to lose so many close friends, and I eventually became jaded to it (especially after I started taking the orange-flavored medicine). And, after each move, the stress on my parents grew more and more, up until the point they were continuously fighting. A lot of times, this fighting ended up boiling over to the youngest child: me.

I remember the first time that I wanted to just leave forever and never come back. I was 10 years old, sitting in my room crying after being yelled at for 2 hours for bringing home a B on a small quiz. By this time, I had all but given up trying to make friends, since my new school was full of jerks, and I’d probably leave them anyways. So, I was alone, with nobody to talk to about what I was feeling. Add this to my already growing depression from the drugs, and (like I said before) I was a mess. With all of this going on, I started to hate a lot of people and things. When I found out that I was addicted to the one drug, I hated every doctor that I ever had, my parents, all the people who had ever made fun of me, and orange juice. Why orange juice? Because I couldn’t stop drinking it, since it tasted almost exactly like the medication I had been taking it. I started to feel trapped by all of these things, and I wanted to find a way out, and I could only think of one. I’m sure I don’t have to write it for you to know what that was.

I was sitting in class one day, when my teacher called me over. Now, whenever a teacher calls a student up to their desk, it’s rarely a good thing, and for some reason my mind raced to think what it was. Of course, I had always been well-behaved, for fear of listening to my parents for several hours, so I had no clue what it could possibly be. I looked down at her desk, as she began to tell me about recommending me to attend a prestigious academy up by Chicago.

Now, I know this sounds really cheesy, but in all honesty, IMSA may have saved my life that day. I don’t know why, but my thoughts slowly turned from always being dark thunder clouds to a student enrolled at MIT or some other prestigious university. I was determined to go there, and it gave me a lot of hope that anyone would think that I was good enough to go to a school with the brightest kids around.

By the time I entered high school as a freshman, things were really starting to look up for me, and I began to make some great friends. Even my parents began to lighten up when they found out that I wanted to go to a prestigious academy. When my acceptance letter came in the mail, it was the closest thing to a miracle I had ever witnessed. Unfortunately, depression isn’t something that just goes away immediately, and it came back to rear its ugly head several times (especially under the stress of Junior year, and 1st semester Senior year). These times, though, I had some amazing friends at IMSA that really helped me through them all (even though they didn’t know it). From a simple hug to a deep conversation (and all the crazy antics between), my friends always managed to cheer me up when I was at my lowest.

Before this gets any more touchy-feely, I’ll wrap it up quickly. In the limited time I’ve been given, I’ve experienced a lot of heart breaks, depression, and general sadness. Despite all of it, I always managed to keep myself going: first, with what seemed like a far-fetched goal, and then with surrounding myself with those that care. I’ve learned that one of the most beautiful things can be talking to a stranger that’s sitting alone at a lunch table. I’ve learned that not giving up on goals and pursuing them with all of your energy no matter what’s holding you back is essential to changing and growing up. I’ve learned so much from what that has happened to me, and so I hope you have learned something too.

Be the first to comment on "Seniors Speak: Orange Juice"