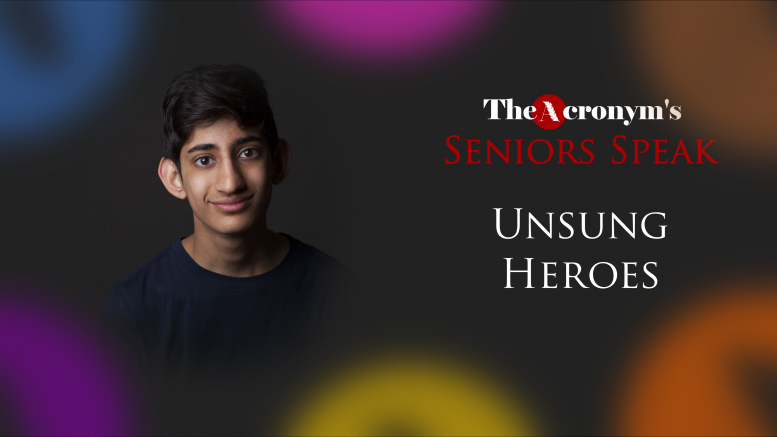 Rakesh Chatrath (‘16) submitted this article as part of our annual Seniors Speak series. This series is designed to give seniors who are leaving a final opportunity to share their voice and preserve the traditions and experience of IMSA’s seniors alive long after they’ve graduated. Rakesh lived in 1505 and was very involved in IMSA Student Productions (ISP) throughout his time at IMSA.

The past few months, I’ve been having more and more conversations about the concept of unsung heroes – people at IMSA whose work goes unappreciated. In this Senior Speaks, the lens will be somewhere it rarely lies: me and what it’s been like to be an ISP member, manager, and president.

I joined ISP my sophomore year simply because my upperclassmen said it would be fun, and it was. Although I didn’t experience it personally, I saw my upperclassmen being extremely criticized despite all the hard work they do. It wasn’t until my junior and senior year that I really experienced this. As I did more events, I began to experience this pressure of having to perform on every event. Expectations of ISP continued to rise, and as president, I felt a pressure to be perfect; if we weren’t flawless, we would get backlash. I responded by taking the criticism and working harder; I would tell new ISP members,“We’ll be painted as a villain; this is our practice, our trade.”

However, once in awhile the criticism still gets through. Diwali 2014 was perhaps one of my worst experiences with this. I went to every practice for 5 hours each, recorded cues to the day of the show because we were given them only two days prior, and tried my best to accommodate the show as much as possible, even to the point of missing dinner a few times. Despite all the work I poured into the show, we still received backlash over little things like the audio having glitches because of bad cables or stage cues being off even though the directions were different the day of the show from our practices. It got to the point that several students and even a parent approached us asking why the cues were so off, topping off a mountain comments that we received. I felt as if I was running down an endless tunnel and that I was constantly being scrutinized. I felt we needed to be flawless, or else were doing a disservice to the IMSA community. The only gratification I could get was from myself, and in my head that meant I’d never could be comfortable, because I always had to improve. To me, this pressure was insurmountable.

At Clash this year when Camden gave a speech recognizing ISP, I had an indescribable feeling. He so accurately tapped into all the feelings, trials and pressures that being such an active member of ISP entailed.

“It’s gotten to the point that ISP has no longer become a privilege, but an expectation – Something that we expect to happen.”

It felt so good to finally be recognized and to have some gratification. In hindsight, after Camden’s speech, I realize that although “being a villain” is indeed a distinct aspect of what we do, there is an undeniable pressure and often an undervaluing of ISP. But, Camden brought up a point that I think often goes unaddressed at IMSA, whether it’s in regards to ISP, StudCo or some other club. This got me thinking.

This stigma isn’t localized to only ISP; I noticed that StudCo felt these pressures too. After the Pep Rally, perhaps the most stressful and certainly one of the most difficult times for ISP, StudCo, and CAB, we were taking group photos after every student left. Suddenly, an ISP/StudCo chant broke out for a few minutes, and I had a very gratifying feeling afterwards. Regardless of our service, ISP and StudCo are very similar. StudCo members feel this same underappreciation. As an organization, their services are largely unseen, and that which the students do see often come off as jarring and radicalizing to the IMSA community. During Clash, this pressure and expectation gets magnified for all StudCo members incredibly so.

But, it’s not just StudCo, it’s not just ISP. Whether they’re students in charge of a specific club or even the janitorial staff, there are loads of leaders and workers that pour their hearts into what they do for the IMSA community and never see an ounce of gratification. To them, I’d like to say thanks; I’ve been one of these “unsung heroes” and I’ve been there. This is my ballad to you, but there are certainly others that haven’t read this and never will. Find those people and thank them, because without them IMSA wouldn’t be the same.

Seniors Speak: Cherish It, Because This Only Happens Once

Be the first to comment on "Seniors Speak: Unsung Heroes"