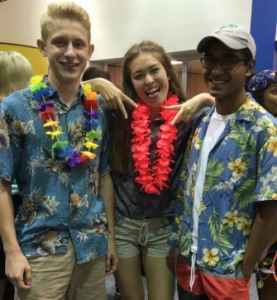 Mateusz Cikowski (17’), Naomi Nakajima (‘17), and Srivarun Tummarakota (‘17) show off their Hawaiian attire in the Old Caf.

September 19th marked the first day of the 2016 Homecoming week. On this “Hawaiian Monday,” students wore touristy floral shirts, leis, and flip flops. However, not as many students as expected dressed up due to the niche theme. Tuesday’s dress-up day theme, “Tired Twin Tuesday,” will likely draw more participation, because sweatpants and comfy clothes are the unofficial IMSA student uniform.

During midday, Student Council president Madison Dong (‘17) and CAB Director Mateusz Cikowski (‘17) officially commenced Homecoming week with a brief opening ceremony. Each said a few words about Homecoming week, then introduced the week’s first midday event:  limbo. The competition was heated, but the senior class took home the victory, thanks to the expert-level flexibility of Amy Xie, Neha Verma, and Jacob Horstman. The sophomores were eliminated first and the juniors placed second.

CAB member Diego Alanis (‘18) announced the class ranks before kicking off the evening event, Meet Your Match. The seniors currently hold the first place title, followed by the juniors in second and the sophomores in third. However, these scores are based only on the limbo competition, so there’s still plenty of time for the other classes to catch up.

Meet Your Match was an event in which dozens of audience members competed to “match” with one of six contestants (Sruti Mohan (‘17), Wasan Kumar (‘17), Diann George (‘18), Abhiudaya Bhalla (‘18), October Gradows (‘19), and Akash Ghandi (‘19)). Based on their answers to the contestants’ questions, the competitors either advanced or were eliminated until only one remained. The winner of each round also received a free ticket to Homecoming.

Good luck to each class!