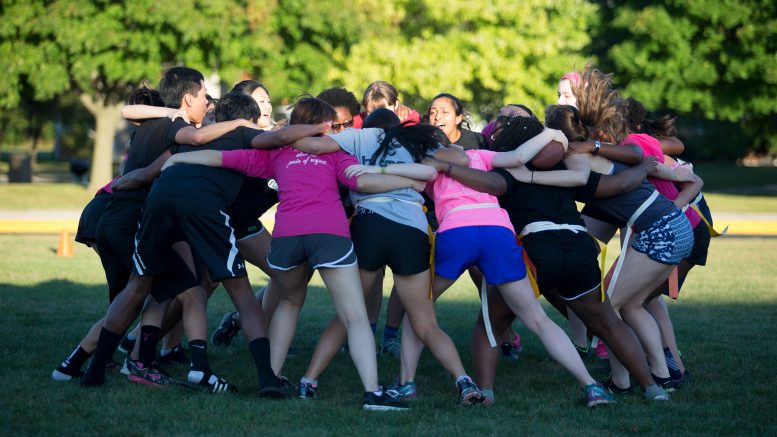 On the second day of homecoming week, students walked through the doors of IMSA in style, flaunting their comfiest sweatpants and flashiest flannels for “Tired Twin Tuesday.” IMSA students might have gotten a “lazier” dress vibe going, but it definitely did not reflect their dedication to the day’s activities.

At Midday, students participated in the food eating contest, putting Man v. Food to shame. Four members from each class raced to scarf down a meatball sub, two ears of corn, an ice cream Drumstick, and twelve saltine crackers. The juniors were the ultimate food devourers, coming in first place. The seniors followed in second place and the sophomores took last.

But never fear, because Powder Puff still gave students a chance to satisfy their hunger (in the spirit of competitive female flag-football)! Tuesday’s evening event, Powder Puff, consisted of 3 all-female class teams coached by their male peers and supported by their class cheer teams. The games took place on Yare and attracted huge crowds of students and RCs. Both the commentators, RC Joe Mastrocola and CAB member Srivarun Tummarakota (’17), did a phenomenal job at keeping the crowd updated!

Each game included two 15-minute halves with a 5-minute half time. The sophomores played against juniors beginning at 5 p.m., and the juniors took a 2-0 win after a valiant effort on both sides. The juniors faced off with the seniors at 6 p.m. and ended in an infuriating tie, so CAB came to the rescue and allowed for a 5-minute overtime. Neither team was able to score again and the points will be distributed accordingly.

Powder Puff marked the end of day two, but students are already hyped for what’s in store for tomorrow: PEP RALLY. This year, Pep Rally will take place at 6:00 p.m. on Wednesday- perhaps having this event on an I-day will give students more time to perfect their drill routine and their enthusiasm!

In the Eiffel Tower scavenger hunt, the seniors have submitted the most codes, followed by the juniors and then the sophomores.

Good luck to all the students tomorrow and a special shout-out to the IMSA soccer team, who has their best record yet going into HC week and will be playing tomorrow!