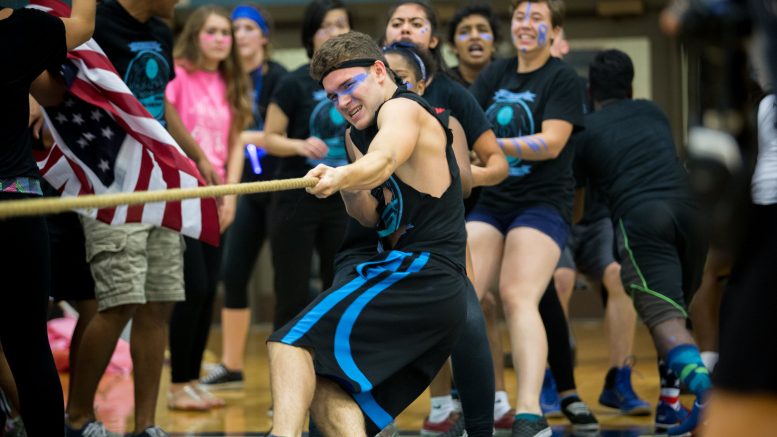 Pep Rally, the finale and also one of the biggest events of homecoming week, took place today, September 21, 2016. Starting as early as an hour before the event, sophomores, juniors, and seniors gathered in various meeting places in the main building to do face painting, take pictures, and pump up their class spirit with music and chants. Clad in their class shirts, they all made their way over to the main gym by 7:15pm.

Kicking off the event was the Obstacle Course, which featured scooters, hula-hoops, and rolling pins among other items. The seniors came in first place for this event, with juniors placing in second and sophomores placing in last.

The next event was an intense game of tug-of-war. Facing off first were the sophomores and juniors, and although both sides gave it their best effort, the juniors ended up winning. Next, the juniors competed against the seniors, and the seniors took the victory for this event as well.

The last event of the night was homecoming drill. Although the sophomores had the smallest number of participants, their drill was impressive. The juniors competed next, evoking quite a bit of cheering as they danced to songs like “Umbrella” by Rihanna. Finally, the seniors showed off their drill, bringing back the Macarena from their sophomore year and eliciting nearly their entire class’ participation from the audience. Congratulations to the seniors for winning drill and to the amazing choreographers who made it happen: Christy Paik, Dhara Patel, and Andrew Ye!

Ultimately, the seniors won homecoming week, with the juniors coming in second, and the sophomores in third. The point totals were 2,245 for the seniors, 1,820 for the juniors, and 1,645 for the sophomores. Bravo to all the classes for the time, effort, and spirit they put into preparing for the events at pep rally; to Student Council and CAB for executing a fantastic week; to ISP for covering video and photography at the event; and to the staff who came out to watch and judge! Enjoy the rest of the week’s festivities!

A Behind-the-Scenes Look at Homecoming 2021