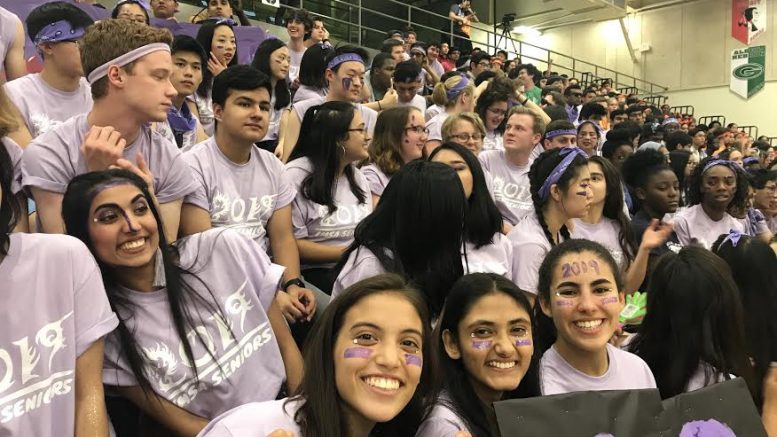 The second to last day of Homecoming Week was a whirlwind of class unity and overwhelming spirit, as each class proudly wore their class colors: purple for seniors, blue for juniors, and orange for sophomores.

There was no midday event: however, there was face painting after school, allowing students from all classes to deck out both bodies and their faces in their class colors for the day’s culminating event, pep rally!!

During pep rally, there were three events: obstacle course, tug-of-war, and drill. During the obstacle course, each class chose ten representatives to stack cups, solve Rubik’s cubes, shoot three-pointers, paint masks, and more. In the end, the sophomore class won, with the seniors following close behind, and the juniors coming in third.

Next was tug-of-war: again, ten representatives for each class were chosen (five boys and five girls). In the end, the seniors proved themselves to be the strongest of them all, followed by the juniors, and lastly the sophomores.

Last was drill, an opportunity for each class to showcase their weeks of hard work putting together complex dance routines. Though each class’ drill was amazing, the seniors rose above them all, taking first prize for drill and catapulting them into first place overall.

Afterwards, senior drill choreographer Aliah Shaira de Guzman (’19) said that “the seniors have worked so hard on this drill that it was nice to see their work pay off, but I had no doubt that we were going to win.” Sophomore Rowan Eggert (’21) agreed, saying that “the senior drill killed it. There’s nothing more to be said.”

Though only the senior class walked away with the first place prize, CAB Director Kanika Leang (’19) wants everyone to remember that the whole point of Homecoming is to just have fun: “The whole reason CAB does this is to celebrate the classes, not to pit them against each other, and I think this year at pep rally we really accomplished that goal, so I could not be more grateful.”

Thank you to everyone for your spirit and class unity, and congratulations to the IMSA Seniors for winning Best Class during this year’s Homecoming Week!

The final scores are: