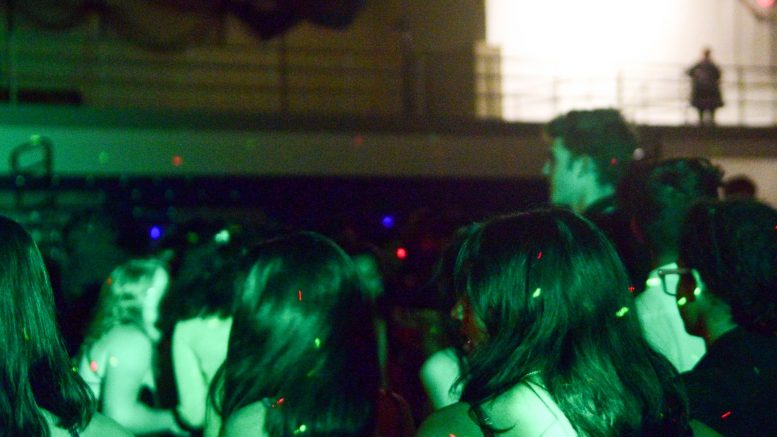 An image from IMSA Student Productions (ISP) from the Homecoming dance floor.

This past month, students at IMSA participated in the largest event of the first semester—Homecoming! Branded under the theme of “enchanting,” the Campus Activities Board (CAB), supported by Student Council (StudCo) organized a multitude of fun events and activities for students to partake in.

The Acronym spoke with CAB Director Vikram Karra about the structure of Homecoming this year, particularly inquiring about how loosened COVID regulations influenced their decision-making. Karra noted that prior to the pandemic, IMSA offered two trips off-campus to downtown Naperville for food and pictures alongside the riverwalk. A tradition that has been brought back this year is CAB offering trips to Geneva Commons and Red Robin in Warrenville. Karra also shared that CAB organized an Ice Cream Social and Field Day event this year, both of which have not been seen in years past. However, he did mention that a vast majority of their efforts were dedicated to organizing the Pep Rally, which included dances from all three classes and engaging activities, including an obstacle course.

Each day, except Wednesday, was a different dress-up day for students and CAB hosted a Midday Event and a Night Event for students. Here’s a recap of all the dress-up days and major events that you will find from this year’s Homecoming Week!

The week started off with Mismatched Monday where students wore creative outfits with pieces that definitely did not work well together! Then, CAB started our first Midday Event of the week with an Opening Kahoot with questions related to IMSA’s Homecoming, ending the day with Capture the Flag on Yare where each class competed with each other in a series of rounds to gain points!

Tuesday was the classic Twin Tuesday and IMSA students jumped at the chance to grab their bestie and wear the exact same outfits for a day! The Midday Event planned for Tuesday was a Fashion Show where each class was given random materials to design and present an outfit to our judges — the teachers! The seniors took the win followed by the sophomores and then the juniors. To wrap up the day, CAB planned a Field Day where everyone got to compete in different games for fun.

Wednesday sadly had no Midday Event but CAB planned an exciting Game Show event for us in the Auditorium where each class gathered and participated in numerous game show events to earn points for their class! The seniors really took the lead here as they won numerous events, really pulling them up in the point rankings, followed by the sophomores and then the juniors.

For Throwback Thursday, students dressed in spirit wear from their old school. With all the heat from the competitions, everyone decided to cool down with some ice cream during the midday Ice Cream Social. Finally, we had titans showing support for our Girl’s Volleyball team in the Main Gym for their game!

Finally, Friday was the day everyone looked forward to as each class donned their class t-shirts (seniors in purple, juniors in pink, and sophomores in blue). During Midday, CAB hosted face painting so that each class could show some class spirit! The day was shortened so that everyone could make their way to the Main Gym for the Pep Rally to see the drills that each class had worked so hard to prepare, in addition to viewing the obstacle course! Finally, the boys soccer team had their Homecoming night game, the perfect way to cap off our Homecoming week!

Along with all the events happening each day, CAB released their classic Riddles every morning. For riddles, the overall placements were sophomores, seniors, then juniors.

The dance was quite a success as we had a record turnout of 300+ students! With this turnout, StudCo will have plenty of money to fund StudCo-chartered clubs for the remainder of the year. Additionally, you can find the homecoming court for each class announced here:

If there’s one part of this article that you should pay attention to, it’s this one. The process of crafting an intricate Homecoming proposal is always a memorable one, regardless of its outcome. To perhaps inspire you in your proposal endeavors for next year, here is a compilation of the various Homecoming proposals we have seen this year! 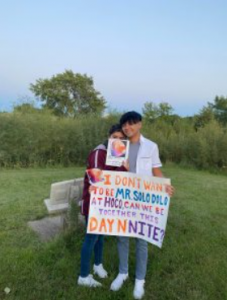 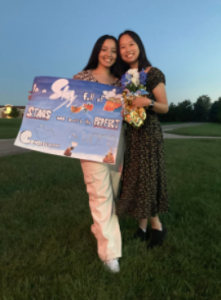 An adorable Coldplay themed poster where “In a sky full of stars, we would be the perfect constellation at Hoco!” From Bhavyaa Chauhan to Rebecca Liu. 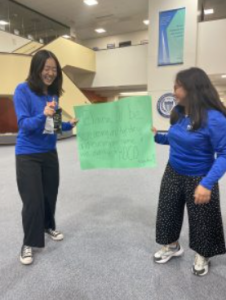 This Taylor Swift themed poster was quite ‘enchanting’ — “Elaina, I’d be screaming and fighting and cursing your name if we didn’t go to HOCO together!”- From Megan Sia to Elaina Xiao.

A Behind-the-Scenes Look at Homecoming 2021

Be the first to comment on "An Enchanted Evening: A Look At IMSA Homecoming 2022"