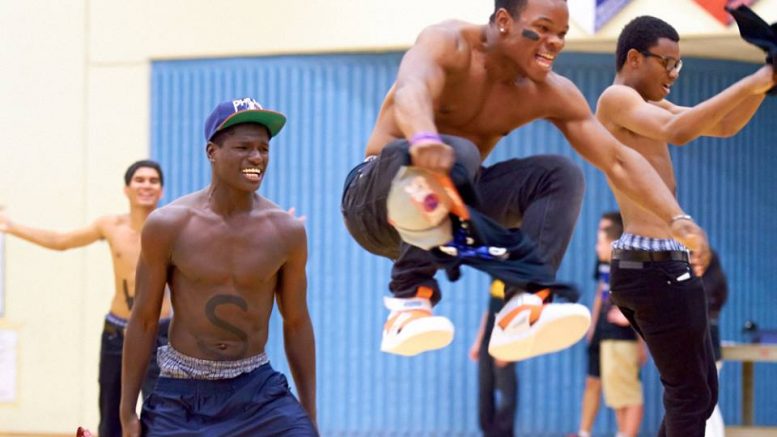 Superfanning has been a tradition for IMSA seniors for years. Photo by ISP.

Every year during the homecoming pep rally, the senior class runs into the gym, tearing through signs and cheering for their class pride. Amid the chaos, a line of seniors appears in front of the bleachers with their letters painted on their exposed stomachs. This annual “superfanning,” or having letters painted on students’ bodies to spell out words, is a tradition for the senior class. This year, that tradition ended.

During the week leading up to the pep rally, a post was made on the IMSA Class of 2018 Facebook page, garnering interest for organizing this year’s superfanning. Over twenty excited seniors volunteered to have letters, numbers, and punctuation written on their bodies –  or, for the majority of these students, their stomachs. However, the day before pep rally, an email was sent out to remind students of IMSA’s dress code, which includes a rule stating that “Navels should be covered.” A statement at the end of the email read: “Please be advised that these standards will be followed at pep rally,” indicating that anyone who superfanned would be given disciplinary action. When directly asked if superfanning would be allowed this year, administration confirmed and maintained that the answer was no.

But why? What was the point of stopping seniors from superfanning? True, it is against the rules stated in the dress code, but why enforce the rules specifically at the Homecoming pep rally? If the point of preventing superfanning was to ensure that students abide by the handbook, it was an ineffective move. For one, the section of the handbook quoted in the email appears to place an emphasis on students being dressed “in good taste” in formal areas such as classrooms and offices. Obviously, the homecoming pep rally is not a formal event. Thus, it is unclear as to why administration would attempt to make an example of how we should dress in formal settings through an informal setting. Also, it is evident to anyone at IMSA that the dress code already isn’t followed on a day-to-day basis. For example, the email also points out that short shorts and short dresses that end above the mid-thigh are inappropriate for a school setting. By spending a few minutes observing IMSA students, be it the classroom, cafeteria, or halls, it is clear that this rule is not strictly enforced.

If banning superfanning was an attempt to make homecoming less “sexual” or “distracting,” it was still a futile move. If one classifies a navel as sexual, then surely common dance moves in the drill performances, such as bending at the waist and body rolls, fall in the same category. Drill songs and dances often reference sex and drinking, and nobody -neither students nor administration – bats an eyelash. In fact, the same could be true for the homecoming dance itself; though homecoming at IMSA is tamer than at most public schools, it is not tamer than a mere belly button. From explicit songs like “Gas Pedal” by Sage the Gemini to the couple “discreetly” grinding behind a dance circle, it’s clear that if administration is trying to enforce modesty, they have much bigger problems than an exposed midriff.

Aashna Prakash is a staff writer from 1502 C-Wing. She is from Springfield, Illinois and is part of the class of 2018. She has attended over eight schools and loves biology and Arthurian mythology.

Be the first to comment on "Seniors, Stomachs, and Superfanning"