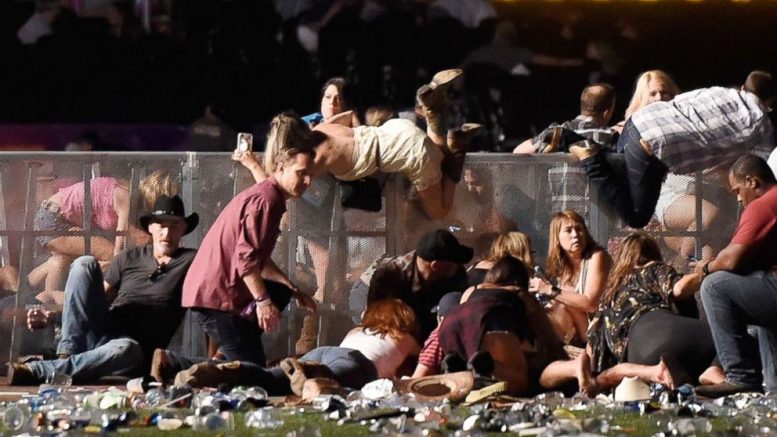 Now the deadliest mass shooting in modern U.S. history, the attack in Las Vegas this past Sunday night marked an American tragedy. A gunman on the 32nd floor of the Mandalay Bay Resort and Casino opened fire on an outdoor concert festival, leaving at least 59 people dead and injuring 527 others.

Concertgoers had been enjoying the final night of the Route 91 Harvest Music Festival across the street from Mandalay Bay, until 64-year-old Stephen Paddock opened fire on the crowd. By the time a SWAT team burst into the room, Paddock had killed himself.

“I thought about the Orlando shooting,” recounted witness Brain Claypool about his experience. “Because we were in this room. We didn’t know where the shooter was. We thought he was going to jump the fence and come in this room and shoot us all… I’m thinking if I’m going to die in the room.”

Terrified bystanders sought cover while some sprang into action, frantically caring for the wounded.

Authorities said the shooter, who checked into the Mandalay Bay Hotel Thursday, was found to have at least 23 weapons in his hotel room, mostly military-grade rifles.

Owners of at least three guns stores in Nevada and Utah told authorities they legally sold firearms to Paddock. Chris Michel, the owner of Dixie Gunworx in St. George, Utah, said that Paddock “was visiting all the local firearm shops” and “seemed like an average, everyday guy.” His purchase was “legal in every way.” It is unknown, however, if the gun Michel sold to Paddock was used in the massacre.

Authorities say that Paddock had no criminal history except for a minor citation. The suspected shooter’s brother, Eric Paddock, said, “We have no idea how or why this happened. As far as we know, Steve was perfectly fine.”

Islamic State claimed that Paddock was one of its radicals, but did not provide any evidence to support its claim. F.B.I. agent Aaron Rouse said that “We have determined, to this point, no connection to an international terrorist group.”

Regarding the investigation, U.S. Attorney General Jeff Sessions stated that “The investigation into the horrific shooting last night in Las Vegas is ongoing. To the many families whose lives have been changed forever by this heinous act, we offer you our prayers and our promise that we will do everything in our power to get justice for your loved ones.”

President Trump commented on the massacre, declaring the shooting “an act of pure evil.” “In moments of tragedy and horror, America comes together as one,” Trump said. Trump has planned a visit to Las Vegas on Wednesday to meet with authorities, first responders, and the families of victims.

IMSA’s own Dr. White had a few words to say.

“If you are a spiritual person, this is the definitely the time to pray as the victims and their families need our prayers,” she said. “Fighting evil with evil means everybody loses, and maybe something good can come out of this tragedy if we lift everyone up in prayer.”

Be the first to comment on "A Burst of Gunfire, and then Silence: Las Vegas"