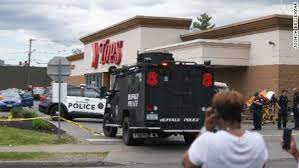 A gunman killed 10 and wounded three in a mass shooting at a Buffalo, New York, grocery store on Saturday. 11 of the 13 victims were Black. The New York Times writes that the shooting was one of the deadliest racist massacres in recent American history.

Among the shoppers killed, CNN writes, were: a former police officer who tried to stop the killer, a long-term substitute teacher, and a taxi driver “who took pride in helping people.” They were as young as 20 and as old as 86.

The gunman has been identified as 18-year-old Payton Gendron of Conklin, New York. Gendron drove upwards of 200 miles to carry out his attack, which he live-streamed on Twitch. In the video, Gendron can be seen pulling up to the grocery store in tactical gear and saying to himself, “Just go for it.”

Currently, Gendron is in custody without bail. His felony hearing, which will determine whether there is enough evidence to put the him on trial, is scheduled for June 9th. Saturday evening, the shooter pleaded not guilty to first-degree murder charges, for which he will serve a life prison sentence if convicted. Erie County District Attorney John Flynn has said he may face more charges: “My office is working closely with the US Attorney’s Office and our partners in law enforcement [to look] into potential terrorism and hate crimes. This is an active investigation and additional charges may be filed.”

Gendron had a background with law enforcement prior to his killings in Buffalo. The shooter was first visited by the NY state police following his submission of a high school project on murder-suicides. Then in June, according to Buffalo Police Commissioner Joseph Gramaglia, Gendron made a “generalized threat” to his high school. State police took Gendron into custody and conducted a mental health evaluation, but the killer was released after a day and a half.

Gendron recounted his involvement with the police on Discord, writing that he “had to go to a hospital’s ER because [he] said the words ‘murder/suicide’ to an online paper in economics class.” He went on: “I got out of it because I stuck with the story that I was getting out of class, and I just stupidly wrote that down. That is the reason I believe I am still able to purchase guns.”

“It was not a joke,” Gendron continued. “I wrote that down because that’s what I was planning to do.”

Broome County District Attorney Michael Korchak, the district attorney in Gendron’s hometown, says he is reviewing “all aspects” of the June investigation into Gendron and “going back several years” to create a picture of Gendron’s relationships and behavior.

Korchak claims it is “hard to say” whether there were grounds for more to be done in June. “Unfortunately, this is nothing new in the criminal justice system. Individuals that have mental health issues may have it under control for a period of time, and then one day they just snap and things as tragic as this happen.”

After Gendron was captured, a 180-page document he had posted online emerged. The document outlines his white supremacy, particularly in detailing his relationship with “replacement theory.” Replacement theory is a conspiracy theory stemming from the idea of “great replacement,” which adherents argue is occurring as immigrants, particularly people of color, enter the US and so influence state processes by voting.

Replacement theorists call for the US to close its border to immigrants. They further claim that immigrants entering the country will lead to white people’s “extinction.” In his document, Gendron claims that, taken alongside the decrease in white birth rates, immigration to the US “equates to a genocide.”

Replacement theory echoes the white nationalist rhetoric that has killed 9 in a South Carolina church, 11 at a Pennsylvania synagogue, and 50 at a New Zealand mosque, among others, all within the past seven years. “[White nationalists] are willing to use any means that are available to preserve and defend their position in society,” says Winthrop University professor of political science and African American studies Adolphus Belk Jr. “It’s almost like a sort of holy war, a conflict, where they see themselves as taking the action directly to the offending culture and people by eliminating them.”

Be the first to comment on "Racist Mass Shooting Kills 13 In Buffalo, NY"