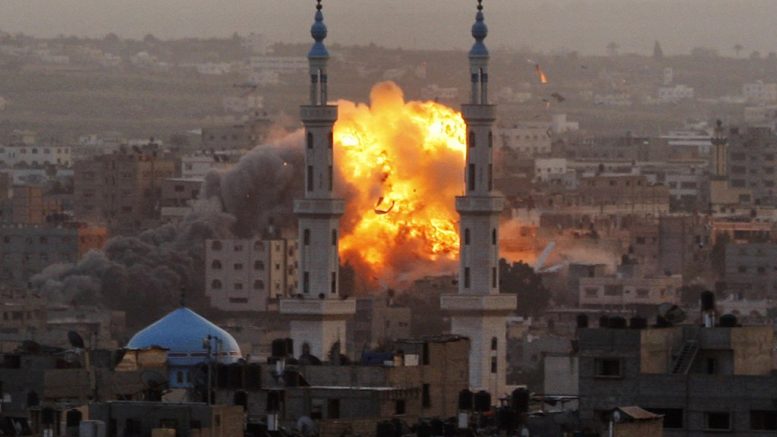 In the past month, violence in Israel and Palestine has escalated, with the United Nations’ warning of a “full-scale war.”

At the beginning of the Muslim holy month of Ramadan, Israel restricted Palestinian gatherings. Palestinian and Israeli police have fought in Jerusalem’s Old City, which houses religious sites sacred to Christians, Muslims, and Jews. Clashes have taken place in and around the Al-Aqsa Mosque, which is the third-holiest site in Islam. The holiest site in Judaism is the plateau on which Al-Aqsa sits.

On May 2nd, Israeli authorities ordered six Palestinian families to leave their homes in the Jerusalem neighborhood of Sheikh Jarrah to make way for Jewish settlers. The Jerusalem District Court ruled that these families must find a new place to live despite their having resided in Sheikh Jarrah for generations. An additional seven families are slated to be forcibly evicted before August 1st. Together, these families comprise 58 Palestinians, including 17 children. These evictions come as a part of the Israelis’ attempt to push Palestinians out of East Jerusalem, which lies within the Palestinian West Bank, to clear the way for a settlement. Settlements, which are illegal under international law, are Israeli encroachments upon Palestinian territory. The Israeli government funds settlements, offering incentives and subsidizing housing for those who move to them. Currently, 42% of the West Bank is controlled by settlements.

The displacement of the people of Sheikh Jarrah is not unprecedented. In 1972, several US donor-backed Jewish settler organizations filed a lawsuit against Palestinians living in Sheikh Jarrah, alleging that their land belonged to Jews. These groups saw to the eviction of upwards of 40 Palestinians between 2002 and 2017.

In 1956, nearly 30 Palestinian refugee families settled in the Karm al-Jaouni area of Sheikh Jarrah. They did so with the aid of Jordan and the UN Agency for Refugees, which made a deal with them: if they renounced their status as a refugee, they would be given land deeds in their names after three years of living in Karm al-Jaouni. The families never got the deeds.

Years later, Palestinian cartographer Khalil Toufakji researched Israel’s claim on the land, uncovering a 1968 decree by Israel’s parliament, stating that Israel is bound to observe the Jordan-UNRWA agreement. “This fact is what has been raised to the Jerusalem High Court on behalf of the Palestinian families in Sheikh Jarrah,” Toufakji told Aljazeera. He doubted the court would rule in the Palestinians’ favor, continuing: “Israeli courts—judge, jury, and legislation—are all in the service of the Jewish settlers.”

The court’s decision was scheduled to be released; however, due to protests and tension related to the subject, the ruling has been postponed. Under international law, the Israeli court system has no legal authority over the people of West Jerusalem.

Israeli policies of arrest, demolition of structures, land confiscation, and forced displacement of Palestinians, according to Toufakji, occur under the Israeli government’s set “demographic balance” in Jerusalem of 70-30, which requires that the city’s Palestinian population be 30% or less.

Hamas, a militant group, controls Gaza. Hamas is supported by Iran and Qatar, while Israel and Egypt maintain tight control of the Gaza border to prevent Hamas from obtaining weapons. On May 10th, missiles were fired by Hamas into Israel. Seven Israelis were killed, and an additional 523 wounded. Before the missile fire, Hamas had issued an ultimatum, demanding that Israeli forces stand down in Sheikh Jarrah and Al-Aqsa mosque after upwards of 300 Palestinians were injured at Al-Aqsa mosque. Hamas warned of potential rocket attacks if Israeli forces did not comply. Hamas’ missiles hit homes and a school. In retaliation, Israel began to strike Gaza. In the time since the first Israeli missile was fired, Israel has deployed tank fire and continued missile strikes. According to the Israeli military, the attacks involved 160 warplanes, which dropped 80 tons of explosives over the course of 40 minutes.

Britain took control of Palestine after World War 1, whereupon Jews began to immigrate to Israel en masse. Violence ensued, and it has been present in the years since.

Violence in the Gaza Strip Escalates Once More

Be the first to comment on "Continuing Violence in Jerusalem"