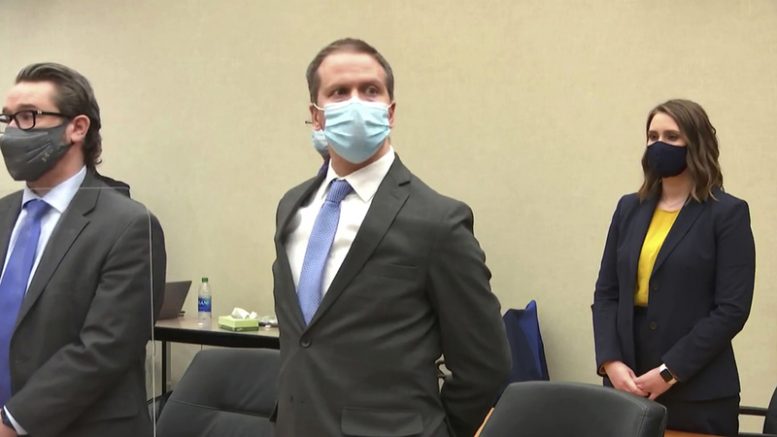 Judge Peter Cahill has asked for a background report on Chauvin, but because Chauvin has no prior criminal record, Minnesota sentencing guidelines call for sentences short of the maximums, Prosecutors have said they aim to impose an additional penalty because of aggravating factors. Factors include that Floyd was particularly vulnerable, that he was treated with cruelty, and that children were witnesses to his murder.

The court’s verdict comes after Floyd, a 46-year-old unarmed Black man, was killed on May 25, 2020, over an alleged counterfeit $20 bill. Chauvin, then an officer of the Minneapolis Police Department and a 19-year-old veteran of the force, knelt on Floyd’s neck for 9 minutes and 29 seconds. Another officer held Floyd’s feet and a third knelt on his back. Floyd became unresponsive, but officers refused help from an off-duty Minneapolis firefighter who wanted to administer aid or guide the officers themselves through CPR.

Then 17-year-old Darnella Frazier caught everything on video. In the nearly year-long period since, protests have erupted across the nation. Demonstrations are ongoing and now protest more recent deaths as well. On April 11, Duante Wright, a 20-year-old Black man, was shot and killed by police in Brooklyn Center, a suburb of Minneapolis. The body camera footage of the Chicago police who killed 13-year-old Latino Adam Toledo was released April 15. Approximately 20 minutes before the verdict was delivered in Minneapolis, Columbus police shot and killed 16-year-old Ma’Khia Bryant.

As the verdict was read, crowds began to chant “justice” and “Black lives matter” outside of the courthouse and the Cup Foods where George Floyd was killed. Chauvin was then led from the courtroom in handcuffs. He is currently incarcerated at Minnesota Correctional Facility – Oak Park Heights. Trials for the other three officers involved in Floyd’s killing are set to be held in August.

Ben Crump, an attorney for Floyd’s family, said in a statement: “This case is a turning point in American history for accountability of law enforcement and sends a clear message we hope is heard clearly in every city and every state.” Though according to some studies between 1,000 and 1,100 people die at the hands of the police every year, officer convictions are rare, with only seven police officers having been convicted for murder on the job since 2005. Crump continued, “But it does not end here. We still have work to do! We must pass George Floyd Justice in Policing Act to hold police accountable & prevent unjustified killings of marginalized POC.”

During a discussion Wednesday, Harvard Law professors reacted similarly. Overall, the panelists communicated a feeling of relief. But Dr. Randall Kennedy said his “relief has a very strong undertone of somberness… After all, the evidence was overwhelming; he’d acted so egregiously… The fact that I even feel so relieved is part of the problem.” Dr. Dehlia Umunna concurred, saying she expected the verdict but was worried that its achievement required “a trifecta of evidence,” in the form of eyewitnesses, medical testimony, and a video record of the killing. “He’s a white man, and he’s a police officer… I felt relief, but it turned into anger and sadness that this is what it took.” Dr. Carol Steiker said she was surprised only to see the “blue wall of silence” breached at last.

At the end of their conversation, the panel discussed the case made by the defense. “From what I saw,” said Umunna, “they did the best with what they had. The defense was ‘Let’s smear the dead and point a finger at all the possible causes of death.’ That’s a pretty weak argument when you have that trifecta of evidence.'” Steiker agreed: “I certainly think they put on what they could. It looked weak because it was weak.”

Moving forward, Attorney General Merrick B. Garland has announced that the Justice Department will be conducting an investigation into the City of Minneapolis and its police department. The investigation will “assess all types of force used by MPD officers… [as well as] whether MPD engages in discriminatory policing.” The Justice Department will review MPD policies, training,  supervision, and systems of accountability, and also reach out to the community for recounts of their experience with MPD.

Amber Heard and Johnny Depp: A Trial of Defamation

Be the first to comment on "The Chauvin Trial: Verdict, Implications, and What’s Next"