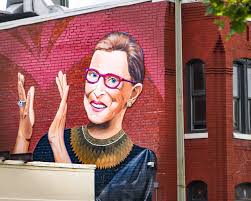 Ruth Bader Ginsburg served on the Supreme Court of the United States from 1993 until 2020 | Source: Flickr

After the passing of the Supreme Court Justice Ruth Bader Ginsburg, many younger students have been curious to learn more of this feminist icon and her legacy. In response to this, Gender Equality Now (GEN), one of IMSA’s clubs, offered a showing of On the Basis of Sex, a movie based on the life of Justice Ginsburg. In both GEN’s and RBG’s mission, gender equality includes advocating for men and women alike.

This feminist icon’s approach to forwarding women’s rights began by winning rights for men. During RBG’s early career, the court was composed entirely of male judges, so RBG understood that she needed to carefully consider her audience when presenting her cases to fight against gender inequality. To argue laws’ biases to the court effectively, she chose to defend male clients that faced discrimination because of their gender so the members of the court could relate better to the person.

The movie On the Basis of Sex illustrated this by spending a large portion of the time on a specific case RBG was representing: Moritz v. Commissioner. This case follows the plaintiff Moritz, a man who was taking care of his aging mother. He sued the court because he was unable to qualify for tax reductions as a caregiver due to being a man. The law was clearly biased because it assumed women would take the role of caregiver, so RBG fought fiercely for him. Winning this case allowed the Moritz v. Commissioner case to set a precedent ruling that a man was unfairly discriminated against on the basis of sex. RBG knew early in her career that winning men the rights of women would eventually help both genders.

“Fight for the things that you care about, but do it in a way that will lead others to join you,” she once said. Ruth Bader Ginsburg secured a legacy as a clever, eloquent, powerful figure, popularly known as the notorious RBG.

If you are interested in gender equality, IMSA has various ways to get involved ranging from taking Gender Studies, an English course, or participating in events hosted by GEN to learn more on equality, BELLAs on empowerment, GLI on education, or other clubs advocating equality, such as the culture clubs or Spectrum!

GEN’s showing of On the Basis of Sex made it clear that gender equality is a discussion meant to include all, regardless of what one identifies with, and IMSA can be the place to have these meaningful discussions.

Be the first to comment on "On the Basis of Sex: A Perspective on Gender Equality "