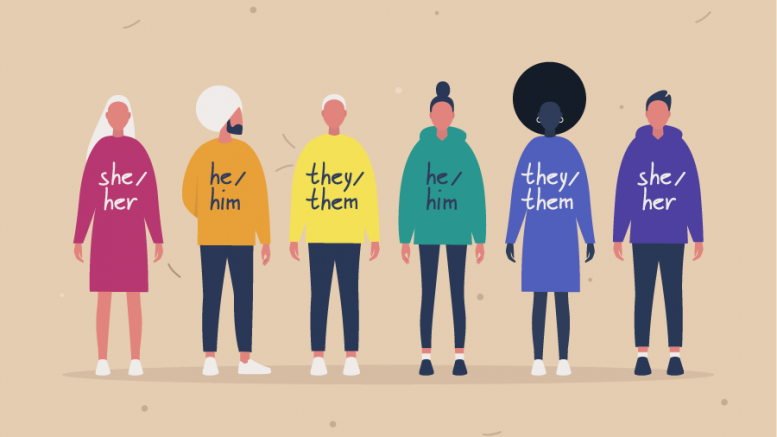 In recent years, public perception and understanding of gender identity has changed significantly, with more people breaking gender roles, moving past stereotypes, or rejecting the notion of a gender binary. Natalie Hulseberg, 21’, touches upon this, describing the evolution as “…historical,” because “sex doesn’t equal gender ever, and sex isn’t even binary. For so long though, the narrative has been the binary and that you have to stick to one or the other and that gender isn’t a spectrum, which is just horrible because putting people into boxes and forcing them into a space that they don’t necessarily want to be in is just so constricting. And it creates a lot of just general anxiety and uncertainty.” For this reason, a person’s ability to safely express their gender identity can be closely linked to their mental health.

However, these concepts have been difficult for some people to grasp, generally the older generations. Thus, to recognize and accommodate specific issues that impact gender, Liz Soyemi, 21’, says that the best thing someone can do is to, “…just [try] your best to acknowledge people, how they want to be acknowledged or respect how someone identifies.” She adds on how a prominent issue being faced is that there has been a lot of, “…misgendering of people and using the wrong pronouns. I understand that everyone’s trying to learn, but really it’s someone’s identity and you should respect how they want to identify. That also includes being intersectional with your approach. So, taking into account other factors that make up someone’s identity such as race, socioeconomic status, et cetera.”

As for IMSA, it is a STEM school, and STEM remains a male-dominated field. As a result of this, non-male students feel discouraged in pursuing a path that they hardly see others like them in. Hulseberg tackles this issue stating, “There is a very widely pervasive kind of idea, a male-dominated field of being STEM. It is not something IMSA has escaped from quite yet. Like when you think about all the faculty, you think about all the physics professors or the chemistry professors, like this is very male-dominated, then even those classes are very male-dominate, despite IMSA literally trying as much as possible and understand that sex and gender is not binary, but tries to make it so that the equal number of AFAB and AMAB students, it’s still really <sarcastic> interesting when you end up in a class, and you’re like one of three or four girls. I’m not saying IMSA necessarily discourages girls from pursuing STEM, but there’s a lot more they could do.”

Beyond discussing these issues within a community, actions against them are possible globally. Soyemi explains that taking initiative is beyond spreading awareness, and “[It’s] also taking that awareness and taking action upon it, being aware of what’s going on in your community, and actually being willing to do something about it. It’s very important cuz, especially nowadays with social media, with our generation, I feel like there’s a lot of performative activism in the sense where it’s like, ‘I’m going to spread awareness about what’s going on. I’m going to share a post.’ And again, talking about things is very important but when it’s always just about like, ‘I’m just going to spread, spread, spread and not really take action upon that.’ I feel like that’s also an issue as well.”

Hulseberg stresses how both Soyemi and she “…represent a lot as GEA and obviously Liz and I have a personal connection, identifying as female, and that does leave out a lot of other perspectives that we try to represent as best as we can, but do not say we speak for. However, we do want to make it known that all groups and all people, regardless of their gender identity or expression, face mental health issues in complex and in different and intersectional ways with other parts of their identity. And, that is a very difficult topic. And, a lot of it is just talking and having these conversations and knowing that you can’t change people’s minds right away, but you can actively try to make situations better and make people feel safe. And that really, if you can, putting your words into action is the best way to improve mental health for all people.”

Be the first to comment on "GEA Mental Health Interview"