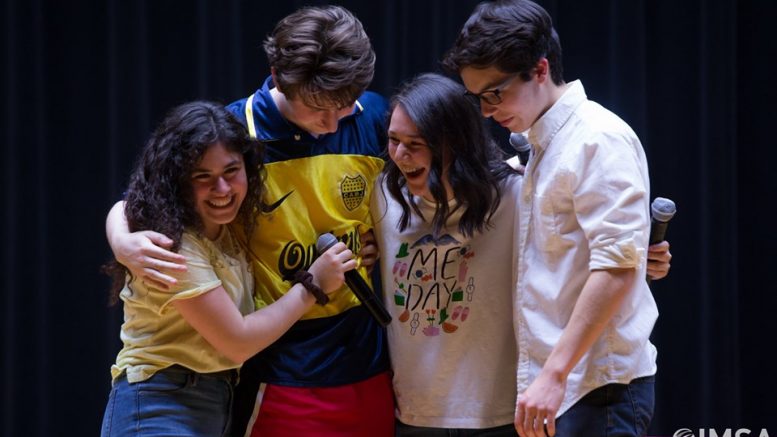 The Hispanic/Latinx community face disparities unique to those of other communities. For example, the adults immigrating to a new country and having to strive for stable living conditions, the children having to be more successful than their parents to not end up in their parents’ situation, and Hispanic/Latinx people having a lack of medical care resources as a result of financial or cultural barriers. These issues develop an environment that makes it difficult for Hispanic/Latinx children to speak up about their mental health struggles or challenges.

Karen Olvera, ‘22, relays her experiences in her family and how, “…as a daughter of immigrants, [my parents] unfortunately did not have the resources or access to an education, and they tell me frequently, like every time I see them, ‘I want you to go to college and get really good grades now so that you can get into a really good college so that you don’t end up like me working two jobs over time.’”

Hispanic/Latinx communities often face language barriers in communicating their mental health struggles. As a result, the parents tend to have a hard time understanding their children when they have issues with their mental health because they aren’t educated on the matter. Olvera expands on this stating, “My mom doesn’t speak English, so she would need someone to speak Spanish to her so that she would understand. And, a lot of parents in general have this issue, here at IMSA [with] language barriers, and people of other communities have parents that also don’t speak English. But, I think that somebody such as a counselor would be able to educate our parents on these things, because a lot of the time, our parents think that we’re just being lazy or that we’re just choosing to have these problems, which is a completely incorrect notion to have.”

Beyond that, to improve Hispanic/Latinx access to and quality of mental health resources/support, the language barrier can be removed by collaborating with both parents and healthcare providers. Explaining this Lethzy Gutierrez, ‘22, says, “Implementing an educational program for the parents and for the healthcare workers would be a good idea because the parents are learning about different types of mental health issues and how to help their kids while the doctors, or just like the healthcare workers are learning about how to help out Latinx people that don’t really know much about mental health and those who need more help than a regular patient that already knows what mental health is and how to treat it and stuff like that.”

Although communication for the older generations is harder, for the younger members of the Hispanic/Latinx community, it is easier for them to support others they see with mental health struggles. As Olvera elucidates how in this era of technology, “…it’s easier for Gen Z to realize symptoms and signs. I think it’s our access to social media, our access to things like TikTok that help younger people in the Latinx community identify if we have a problem or not. Like I said, I don’t endorse self diagnosing, but it’s helpful in the sense that you kind of just identify a problem. Unfortunately this isn’t accessible for everyone in the Latinx community because of the low income barriers. Some people don’t have access to technology or the internet. Also, the general older generation is not as experienced as we are. So I think it’s kind of helpful, but it’s not a solution.”

As a result of this lack of professional mental health support alongside these factors that make it hard for the Latinx/Hispanic community to reach out, there are still things that need to be done to combat this issue. Although reaching out for help can still be accomplished even if there is non-familial support, Gutierrez describes how, “If you don’t have family around you, it can still be hard to find someone, and like we mentioned earlier, therapists are really expensive and it’s not something that a lot of Latinx people can afford. And even with health insurance, sometimes it’s just not enough of what you need. So, although it may not help a lot. Every school has a counselor, so you can start out there. And I do know that there’s a lot of resources out there if people have the technology, people can ask a search engine for resources for mental health. And, some colleges specifically, offer resources for Latinx students, regarding mental health issues, because they do know that sometimes we don’t have a support system.”

Two generations of Nurses’ Opinions on the COVID-19 Crisis

Be the first to comment on "Alma Latina Mental Health Interview"