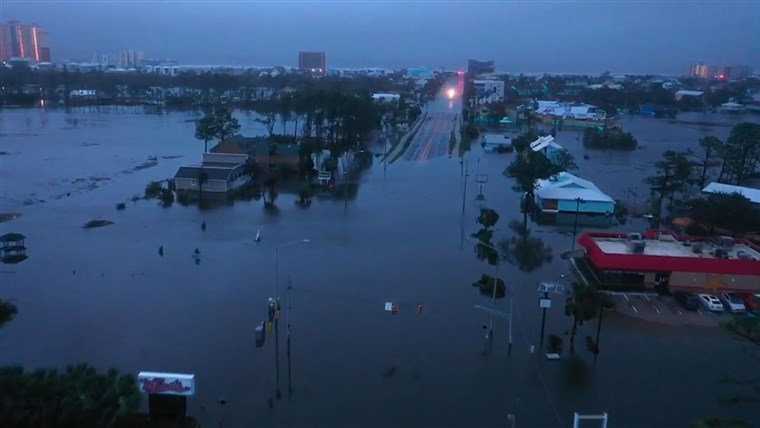 Even if the world has changed this summer, one thing has remained constant: Hurricane Season. Just this month, there have been 10 tropical storms and hurricanes in the Atlantic Ocean. These Hurricanes have caused massive damage to the American southeast and the islands in the Gulf of Mexico. One especially heavy storm this season was Hurricane Sally.

Hurricane Sally hit land in Alabama on September 14th as a Category 2 Hurricane, and even though it was a strong hurricane for only 6 hours, it did devastating damage over four states in that time: Florida, Mississippi, Alabama, and Louisiana. Hurricane Sally first touched land in Alabama early on the 14th, as the first hurricane to hit landfall in Alabama since Hurricane Ivan in 2004. The damage varied in locations based on their distance from the eye. The eye of the storm had a course from Alabama to Florida, but this course was completely off the track of what was expected, as the eye was originally predicted to hit Louisiana and be moving north into Mississippi. This caused Florida to experience much heavier rain than expected, beginning as early as September 12th. Hurricane Sally hit the hardest on the Panhandle, with more than 30 inches of rain in most cities, while it wasn’t as harsh on other parts of Florida like South Florida and the Keys, where it rained an average of 10 inches. In Pensacola alone, it rained 30 inches, with the storm surge at 5.6 feet high, the third highest storm surge the city has seen, even forcing many passenger ferries onto the streets. The hurricane also caused extensive damage to the people as it caused a power outage for over 500,000 people over the four states and destroyed many bridges and highways, including the connecting I-10 highway. Many cars were totaled after water seeped into their engines and there were multiple tornado warnings over the course of the hurricane. 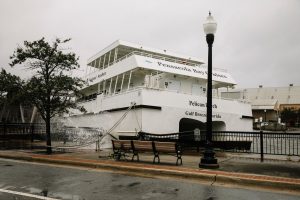 A passenger ferry in Pensacola, Florida, is pushed onto the streets due to excessive winds|| nytimes.com

In Alabama, many homes were destroyed and two riverboat casinos detached from the docks due to the heavy winds and water pressure. The winds even reached speeds of 121 miles per hour during the course of the Hurricane. Many rivers, lakes, and even sewage overflowed during the hurricane, causing the condition of many small rivers, ponds, and creeks. In Baldwin County in Alabama, almost 95% of the population was without electricity at one point during the storm. In other areas like Mississippi and Louisiana, even if the storm’s path changed, the effects of the storm could still be seen due to the overflowing of important lakes like Lake Pontchartrain, and the heavy flooding throughout the streets. There were also multiple tornadoes reported throughout the region. This hurricane caused a devastating blow to the Alabama economy as it destroyed many crops across the state, adding strain to the agricultural industry which was already struggling due to COVID-19. 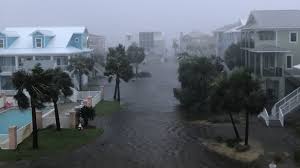 As Hurricane Sally rescinded over the next few days, more and more storms popped up in the Atlantic Ocean and the Gulf of Mexico, with five other storms en route to the US over the weekend, a phenomenon that hasn’t occurred since 1979. Of them, include two category 3 hurricanes, Hurricane Paulette and Hurricane Teddy. Both already caused heavy damage to Barbados in the span of two days and are expected to graze the east coast in the upcoming week. And due to running out of names, the National Hurricane Center has even started to use Greek letters as names for impeding tropical storms in the Gulf. Tropical Storm Beta is especially under watch as it has the possibility of crashing the Texas Coast and Louisiana on Sunday, causing many cities as far inland as Austin to start evacuations. 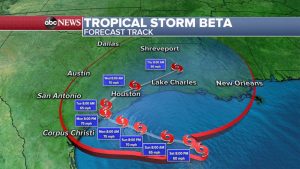 The expected path of Tropical Storm Beta over the weekend|| abcnews.go.com

With the Hurricane Season at its harshest point yet, with more intensity than in the past five years, and the growing wildfires on the West Coast, we need to rethink our stance on Climate Change as irregular weather cycles and patterns caused by excessive heat pushed the hurricanes into mainland US, causing extensive damage to many states and lives, and this situation will only get worse unless we change.

Be the first to comment on "Hurricane Season 2020, the One Normal Thing About This Year"