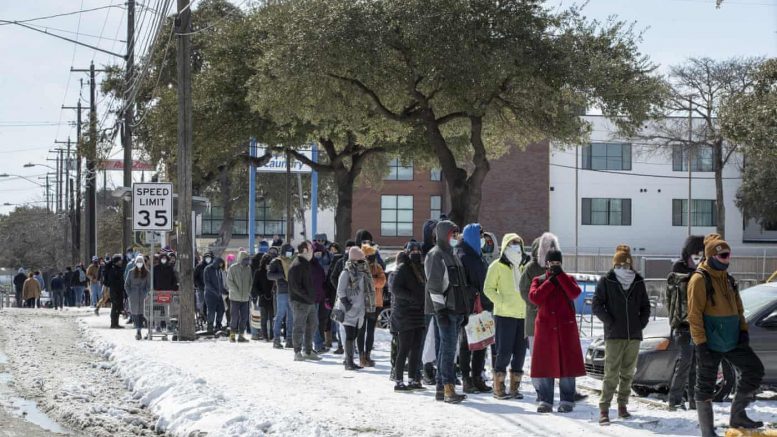 People wait in Austin waiting in a long line outside a supermarket to buy groceries || theguardian.com

On Monday, February 15, over a third of the United States recorded below-zero temperatures as the country was swept by winter storm reaching from Texas all the way to New York. The storm hit many places harshly, with the worst being in Texas. Early into that morning, Texans endured rolling blackouts, as the Electric Reliability Council of Texas – an electrical grid operator which controls almost 90% of the electricity supply in the state- announced that it was experiencing a record-high in electric demand. In the days that followed, millions of Texans were left powerless in below-freezing temperatures.

The power outages led to burst pipes and hampered water plants, soon leaving almost 15 million people with disrupted water supplies. Texans tried to use their cars and generators for heat, only to lead to multiple cases of carbon monoxide poisoning across the state. By Friday, President Biden had declared the situation as a major disaster.

The harsh effects of the snowstorm were no surprise as in 2011, even after many warnings, the state of Texas switched to electric-grid operators that were not prepared for an event like this, making this statewide chaos just a matter of time. Though this disastrous snowstorm doesn’t seem to be caused by global warming, it is potentially a direct effect of climate change as the high temperatures sent the climate into chaos. Scientists say that the rising temperatures in the Arctic may be weakening the jet stream that usually keeps cold air deep in the northern hemisphere. This weakening of the jet stream allowed cold air to drift into lower latitudes.

The rise in global temperatures also leads to heavy fluctuations in the climate conditions, from resurfacing La Nina cycles to unexpected precipitation. At the stage we are at, there is no fixing our past mistakes, so moving forward, we must take the necessary steps to reduce our carbon footprint and stop global warming, to ensure a similar event does not occur again.

Tornados leave their mark on the Midwest