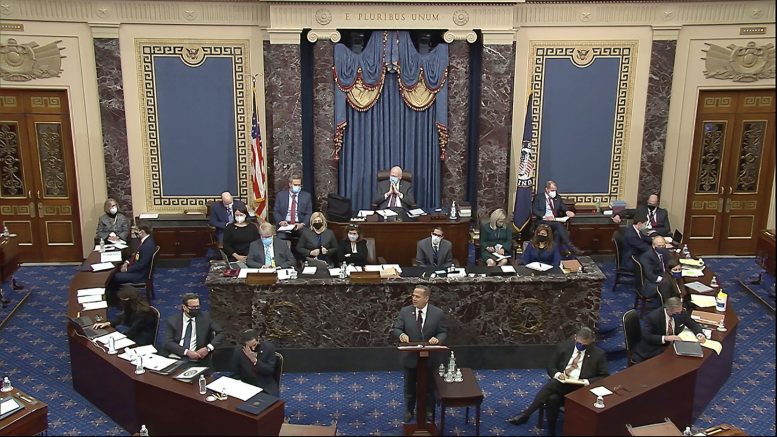 During the first week of February, the second Trump impeachment process continued with the Senate trial, which ended with the former president’s second acquittal. There has been a lot of controversy surrounding the constitutionality and results of this impeachment.

The impeachment began as a result of the January 6th insurrection, where Trump supporters stormed the capital to prevent the certification of the election after the former president unsuccessfully tried to overturn the 2020 election results. These rioters stormed the capital after attending a speech given by Trump telling them that they were protesting the election certification. A total of five people died in the riot, including a police officer.

The impeachment process officially started when Representatives David Cicilline, Jamie Raskin, and Ted Lieu introduced the articles of impeachment against Donald Trump, charging him with incitement of insurrection. These articles stated that “He also willfully made statements that, in context, encouraged—and foreseeably resulted in—lawless action at the Capitol […] and thus incited by President Trump, members of the crowd he had addressed, in an attempt to, among other objectives, interfere with the Joint Session’s solemn constitutional duty to certify the 12 results of the 2020 Presidential election, unlawfully breached and vandalized the Capitol, injured and killed law enforcement personnel, menaced Members of Congress, the Vice President, and Congressional personnel, and engaged in other violent, deadly, destructive, and seditious acts.”

These articles were introduced on January 13th and the full article of impeachment can be found here.

On January 13th, the House voted to impeach Donald Trump in a 232-197 vote (four representatives didn’t vote), making him the first president to be impeached twice. Unlike the first Trump impeachment, ten Republican representatives voted to impeach Trump and condemned the former president’s action. Nine house managers were appointed, with Rep. Jamie Raskin being named the lead manager. On January 25th, the house managers initiated the start of the impeachment by reading the articles of impeachment on the Senate floor.

The Senate Impeachment Trial began on February 9th with a vote to dismiss the impeachment charge, claiming it was unconstitutional to try a president once they were out of office. The house managers argued that the trial must happen to prevent a precedent of presidents committing impeachable offenses, such as insurrection. Ultimately the Senate voted 55-45 that the impeachment trial was constitutional.

After the pre-trial, the house managers began presenting their case to convict Donald Trump by detailing the events that took place on January 6th. This included using new video footage that demonstrated how close capital rioters were to the now-former Vice President Mike Pence and other Congress members, the house managers also pointed out that many of these rioters threatened his life. House managers also included witness testimony from arrested rioters that said they would have attacked congress members if given the chance and that “They did it because Donald Trump sent them”. The prosecution concluded with arguments that the former president was slow to respond and denounce the actions of the rioters. This concluded their opening argument.

Former President Donald Trump was represented by defense lawyers David Schoen and Bruce Castor. The first point the defense argued was that the impeachment was unconstitutional and was the result of partisan disdain for Trump’s political beliefs. They stated that D0nald Trump’s speech on the day of the insurrection encouraged peaceful protest. As well as that Donald Trump could not have incited the riot because criminal charges claimed the violence was premeditated. Schoen then claimed that House managers manipulated evidence and presented false information. Then a video was presented of several Democrats saying “fight” to claim Democrats are hypocritical. After the prosecution finished by stating Donald Trump’s rhetoric was within free speech, there was a Q&A section for senators to ask questions before the conviction vote.

In the end, the Senate voted to acquit Donald in a 57-43 vote, 67 votes are needed to convict, with 7 Republican senators joining the Democratic caucus, making this vote the most bipartisan in an impeachment trial. These results have gotten mixed results from those in public office and public opinion, as the polls showed that the nation is divided on this issue with 50-55 % percent showing support for conviction. After the vote, the Senate Minority Leader Mitch McConnell, who voted to acquit, said that “there is no question that President Trump is practically and morally responsible for provoking the events of that day” stating the reason he didn’t vote to convict because Trump’s term had ended, even though he earlier chose to delay the trial until February 9th. As the impeachment trial comes to a close, Congress will likely shift to focusing on COVID-relief and approving the rest of President Biden’s cabinet.

Be the first to comment on "Summary of Second Trump Impeachment"