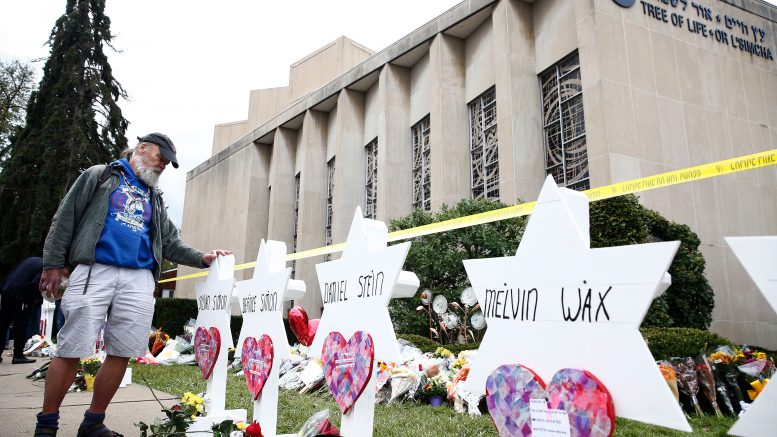 Photo by JARED WICKERHAM/EPA-EFE/REX/Shutterstock (9948253r) A man takes a moment at each of the Star of David memorials with the names of the 11 people who were killed at the Tree of Life synagogue.

This Tuesday, November 6th, Hatikvah, IMSA’s Jewish culture club, held a memorial service for victims of the shooting in Pittsburgh the week prior. The event featured a variety of traditional Jewish prayers and songs chosen by members of the Hatikvah board. Dr. Micah Fogel also helped to facilitate the event, providing additional information about the prayers and songs. Both faculty and students were in attendance, and there was challah available for everyone to share.

The first prayer was the Mourner’s Kaddish, which was stated in English translation due to the fact that there was not a minyan present, which is the amount of Jewish adults necessary for certain religious rites. Following this was a group of various songs typically sung during weekly Shabbat services. These songs were chosen because they were deemed appropriate to recite at this particular service, due to the nature of the event and the fact that many prayers of mourning are typically recited by loved ones. The service closed with “Hatikvah”, the Israeli national anthem, and also the namesake of the club, as a symbol of unity and peace.

Immediately following the service, Hatikvah also held a discussion focused on modern antisemitism. The discussion focused on a slew of topics relating to antisemitism, including its difference from anti-Zionism, passing privilege, and when free speech turns into hate speech. The topic that seemed to have the most to be said about was how hate speech is dealt with in our society. Many shared their views and thoughts about people can work to better combat antisemitism and how to properly deal with it when it is identified.

Hatikvah plans to hold more events in the future discussing various issues within the Jewish community in order to both educate and attempt to work through these issues.

Derek is a senior living in 1501 D wing. He loves The Sims, chicken tenders, and all of his friends. You can most likely find him standing on his desk and yelling at his Amazon Echo to play Madonna.