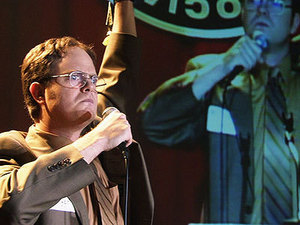 In the above picture, Dwight gives a speech for a salesman convention for the Dunder Mifflin Company.

On the day of the 2018 sophomore class club elections, candidates were anxious about the hours to come. They had been working so much for this moment and, although there was a chance they could lose, they felt happy for how far they came. There were 5 positions open for SOCC: President, Vice President, Concessions Director, Publicity and Outreach Director, and Logistics Director. There were 3 candidates for every position, except for the Logistics Director with 2 and the Concessions Director with 1. Speeches would be given by each of the candidates and, at the end, all of the sophomores would vote for one candidate for each of the positions.

The lights dimmed down and the curtains opened up… time for the election! The first speech was given for the Concessions Director position. Although there was only one candidate, Emma Darbro, the sophomores cheered her on as she spoke from her heart. That may seem cheesy, but this is truly how the sophomores felt; I mean, I was in the audience! The next speeches were given for the Publicity and Outreach Director position. All of the candidates for this position: Jon Gao, Francesca Dumitrescu, and Amanda Chen, showed their true selves and made it seem as if the audience was holding a normal conversation with each one. The next position was the Logistics Director position. This position had two candidates: Patrick Hultquist and Alex Pomerenke, and both of them were candidates that were really invested in learning how to use spreadsheets to help them further improve our Sophomore Club. The last two sets of speeches were for the Vice President and President positions. For the Vice President position, Ram Kakinada, Krisha Patel, and Hiteshi Patel spoke, and all of them highlighted exactly what they were going to do keep the sophomore class happy. The final position was for the President of SOCC, and Jimmy Guo, Bridget Bunt, and Hamza Haq were each in the running. Each of these speeches had interesting parts. For instance, Jimmy brought up a past experience from his life as a story and he used this as a segue into why he should become the president. In Bridget’s speech, she brought up study hours and how she would work to get rid of them, which really seemed to rouse the crowd. The final speech was given by Hamza Haq, who recited a speech given by a character from the famous show “The Office”: Dwight Schrute. Yes, I said Dwight, one of the most imposing characters in the show. This speech by Dwight had a lot of hand movements and when Hamza performed these movements, everyone in the audience began laughing.

Although only one candidate was chosen for each of the positions, I would like to point out the fact that each of the candidates even applied showed their bravery and dedication to servicing the CLASS OF 2021! The candidates chosen are listed below:

The 5 Kinds of LEAD Groups You’ll See at SLX

Be the first to comment on "The Election of the Century: Sophomore Class Club"