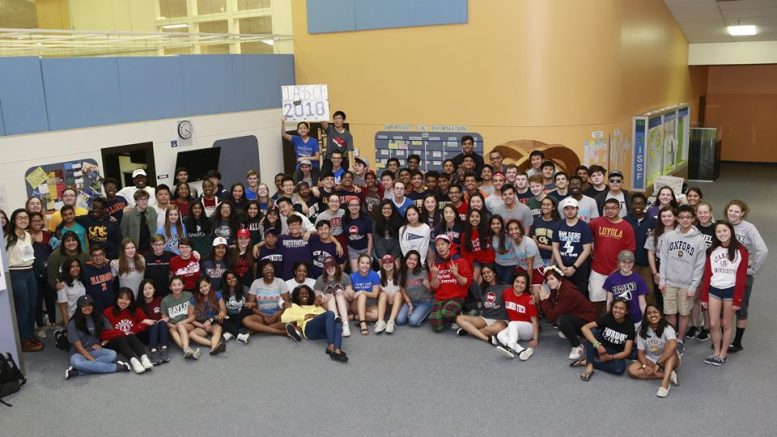 I dreaded the college application season as a junior because of my sex. I knew that in a year, I might face the invalidation that comes with getting accepted by a school my male counterparts are deferred or rejected by. When early action and early decision results came out in December, I saw memes made about how disadvantaged the boys at IMSA, and boys in general, were in the college admissions process. While I watched intelligent girls announce their acceptances to Yale, Princeton, Stanford, Johns Hopkins, and other amazing institutions, my heart swelled with excitement for them. Yet, at the same time, I couldn’t help but wonder if their sex actually did give them a leg up in the college admissions process.

When I looked at the divide of acceptances between males and females at the academy, I found that girls tended to gather more acceptances each year. In the past 8 years, of every acceptance letter received, more than 50% fell into the hands of a female.

Visit https://plot.ly/~sverma1/29/ if the above chart doesn’t work. This graph is interactive! Mouse over points to learn more about them, double click legend entries to isolate them, and drag over an area you’re interested in to zoom-in on it.

Visit https://plot.ly/~sverma1/36/ if the above chart doesn’t work.

The buzz I heard surrounding sex and college admissions occurred during the Early Admissions season, a season where many seniors apply to their favorite school in the hope that the increased acceptance rate will work in their favor. It’s widely known that different application types draw in different amounts of applicants, and therefore varying acceptance rates.

Visit https://plot.ly/~sverma1/27 if the above chart doesn’t work.

During most years, female applicants experienced higher acceptance rates in almost every single category of application. With the exception of the Early Decision acceptance rate showing extreme amounts of fluctuation throughout the years, the general trend has remained the same since 2011.

First, the IMSA student’s favorite school, the University of Illinois at Urbana Champaign. The IMSA acceptance rate to UIUC is already high and typically doesn’t cause a large amount of discourse within the senior class, but it also promises the largest sample size of IMSA students.

Visit https://plot.ly/~sverma1/31 if the above chart doesn’t work.

Disclaimer: This data also does not correct for the different majors which students may have applied to.

Next is Case Western Reserve University, which provides the option of applying Early Action or applying Regular Decision. Female applicants have tended to dominate both the Early Action and Regular decision acceptances throughout the past 8 years with occasional inconsistencies, one of which can be seen in the 2016 cycle.

Visit https://plot.ly/~sverma1/33 if the above chart doesn’t work.

Northwestern University offers the opportunity to apply as either Early Decision, a binding application plan, or Regular Decision. Throughout the past 8 years, there are no clear trends in the IMSA application acceptance patterns to Northwestern University. Some years, females lead the Early Decision or Regular Decision acceptances, and others none of them are accepted. During most years, the regular decision acceptance rates were relatively similar.

Because these conclusions didn’t account for female and male stereotypes, I chose to compare two Universities right next to each other in Boston. Harvard, a liberal arts university, follows the general random pattern seen in Northwestern, another liberal arts university, whereas the Massachusettes Institute for Technology saw a decrease in male acceptances and an increase in female acceptances over the years. This trend follows those found nationwide.

Visit https://plot.ly/~sverma1/38 if the above chart doesn’t work.

Although sex may play a role in college admissions, those applying to college have no way of preventing their admissions counselors from accepting them based on their sex. Each applicant puts hard work into both their application and their entire high school career. The role of sex in college admissions cannot counteract a weak application, and it cannot overpower an extremely strong one. While college decision season is a tense period in seniors’ lives, remember that each applicant worked just as hard as you did, and their admissions are valid.