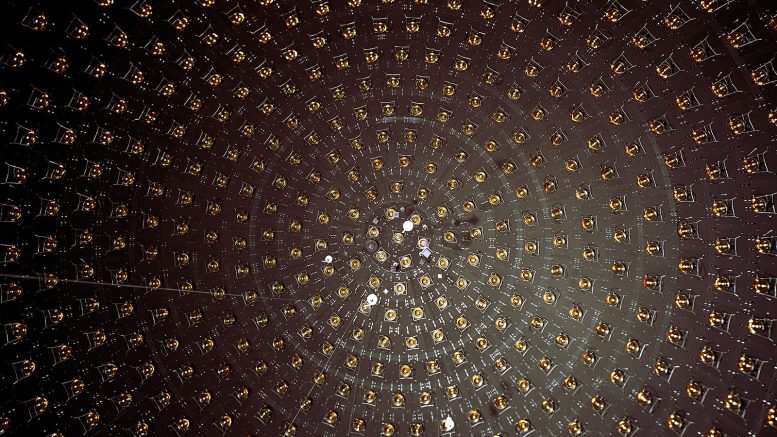 The MiniBooNE experiment acted as the predecessor to Fermilab's MicroBooNE, using a Cherenkov Detector as opposed to the latter's liquid argon time projection chamber | Source: Fermilab

New results from the United States Department of Energy’s Fermi National Accelerator Laboratory (FNAL), or Fermilab for short, show no signs of a fourth flavor sterile neutrino. This hypothetical particle was posited by many theoretical physicists as a potential explanation of why the three neutrinos of the Standard Model, the electron \( ( \nu _{\text{e}} ) \), muon \( ( \nu _{\mu} ) \), and tau neutrinos \( ( \nu _{\tau} ) \), do not fully explain the observed characteristics of these particles. The sterile neutrino was also frequently suggested as a potential candidate for dark matter, hopefully explaining the “missing mass” apparent in many observed cosmological systems of the Universe.

Sterile neutrinos, or inert neutrinos, sometimes denoted as \(  \nu _{\text{s}}  \), were initially proposed during the first observations of neutrino oscillation at the Liquid Scintillator Neutrino Detector at Los Alamos (LSND). LSND conducted observations on a beam of muon antineutrinos, hoping to confirm the flavor-changing oscillation behavior proposed by researchers in the ’90s. This odd phenomenon allows neutrinos to switch between their three types (dubbed flavors) rapidly. The ability to oscillate also implies the existence of mass, however small (a million times lighter than the second lightest particle on the Standard Model, the electron), putting to rest initial theories that the neutrino would be massless. However, a massive neutrino brings to light more problems than it solves. 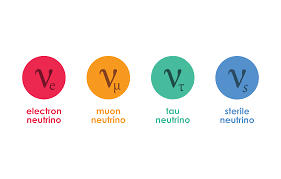 The hypothetical fourth linear superposition state of the neutrino dubbed the sterile neutrino, alongside the three known fundamental neutrinos of the Standard Model | Source: CERN

For example, all particles have an intrinsic angular momentum known as spin. A particle can either be left-handed or right-handed depending on the orientation of its spin based on the direction of its momentum. The Higgs boson, discovered in 2012, has spin-0 and even parity (neither left-handed nor right-handed). When particles interact with the Higgs field, their handedness switches to the opposite sign (for example, a left-handed electron would switch to right-handed after interacting with the Higgs field). This occurrence plays a major role in making particles massive. However, neutrinos do not seem to follow the same behaviors as these other particles. While they do have left-handedness, there seem to have been no instances in which right-handed neutrinos can be detected.

In 2002, an experiment at Fermilab called MiniBooNE (the predecessor to MicroBooNE), found a similarly odd result as LSND years prior: more electron neutrinos were being detected than initially predicted based on oscillation models. Not only were neutrinos massive, causing confusion regarding the source of their mass, but they also seemed to be changing flavors in an unexplainable pattern. It turns out that both of these problems can be alleviated through the introduction of a fourth neutrino flavor: the sterile neutrino.

If the neutrinos were oscillating to more than three flavors, the anomalies from LSND and MicroBooNE could be explained by this inert neutrino that interacts to an even smaller degree with matter. However, the results of LSND and MicroBooNE contrast those of data from two other experiments dubbed IceCube and MINOS+, neither of which detected any signs of anomalous oscillation. Simultaneously, various theoretical predictions for the number of electron antineutrinos did not match experimental measurements. It seemed as though a new experiment was in order: MicroBooNE.

MicroBooNE and the Future of Neutrino Research

Because of these contrasting results and lack of a clear path for neutrino research, the MicroBooNE project was constructed with the intent of clarifying prior data, focusing heavily on a more accurate reconstruction method with its liquid-argon scintillator. According to Fermilab, the MicroBooNE experiment had three major goals when it started up in 2015:

The experiment consisted of a 170-ton liquid-argon time projection chamber (LArTPC) and began running in late 2015. Many predicted that the anomalies found at its predecessor, as well as LSND, would be replicated. However, there were no variations in the predicted and observed numbers of electron neutrinos as had been seen previously, thus showing no sign of a fourth flavor sterile neutrino. 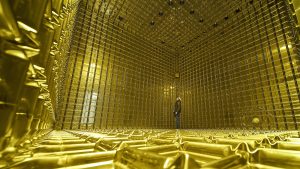 The two detectors of DUNE, one placed by the source beam at Fermilab, the other at Sanford Underground Research Laboratory in South Dakota, will be approximately 1,300km apart | Source: Fermilab

Although this does not entirely rule out the existence of sterile neutrinos, many upcoming experiments, such as the Deep Underground Neutrino Experiment (DUNE) at the Long Baseline Neutrino Facility (LBNF) also at Fermilab, may change the focus of their data analysis in response to the null findings from MicroBooNE. DUNE, one of the largest international particle physics collaborations ever, with over 1,000 collaborators from over 200 in a total of over 30 countries, looks to continue the search for a more detailed understanding of neutrino physics. The collaboration hopes to begin its runs in 2026, with construction continuously being updated and altered according to new specifications and results monthly, and hopes to find potential explanations for the hypothetical proton decay (a phenomenon previously thought impossible), as well as to shed light on the imbalanced handedness of the neutrinos.