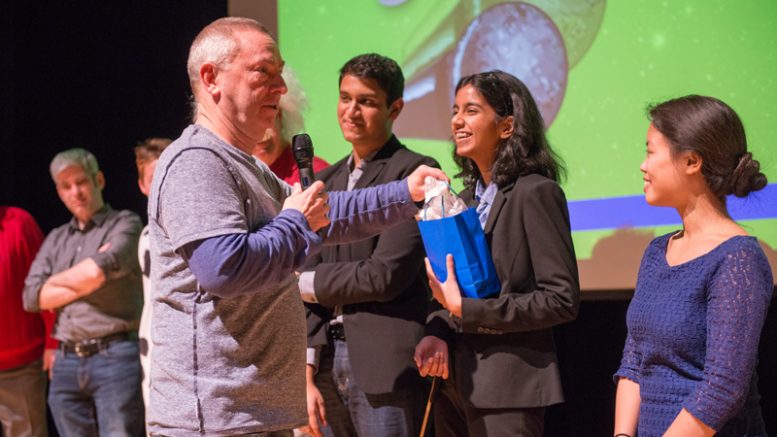 For the first time since its inception six years ago, IMSA students collaborated with scientists at Fermilab for the wildly popular Physics Slam, a lighthearted competition that combines education and fun. The five IMSA seniors Gunwati Agrawal, Abhiudaya Bhalla, Rain Bravo, Manny Favela, and Isabella Ginnett were chosen for their knowledge and passion for physics and were then paired with a scientist in March of last year. Together with their scientist, each senior chose a specific topic and then worked to educate their audience in an engaging manner.

Isabella Ginnett (’18), whose presentation alongside physicist Don Hooper was entitled Muons: The Bestest Particles in the History of Like Ever, dressed in a cow costume as to represent a moo-on and performed a rap entitled “Leptons Just Don’t Understand,” modeled after the popular song “Parents Just Don’t Understand” by D.J. Jazzy Jeff and the Fresh Prince. According to Isabella, a passion for physics was necessary to undergo the stressful process of memorizing a presentation and performing in front of a sold-out audience, as the students were “representing IMSA, Fermilab, and high school students in general.” Dr. Dong, one of the Physics Slam emcees, agreed but also believed that the hard work paid off, as “this Physics Slam was the best ever.”

Gunwati Agrawal (’18) believed that, while the experience itself was rewarding, “bringing the wonder of discovery to everyone” was the most poignant part. Dr. Dong recalled a 10-year-old girl who, upon learning that he was a teacher at IMSA, asked, “when can I enroll?” To Gunwati, these interactions proved that girls at younger and younger ages are feeling empowered to explore careers in STEM, demonstrating that events such as the Physics Slam have an impact on those who watch it.

“In talking with Fermi and discussing Fermi’s 50th and IMSA’s 30th anniversaries, partnering students with scientists seemed a fantastic never-been-done before opportunity,” said key organizer Catherine Stieg, who works in IMSA’s Community & Alumni Relations. “Being able to connect 5 students with 5 phenomenal scientists to work on a project that was not only educational but really fun and help those students further expand their knowledge was part of the driving force in putting this together. And also – it had never been done before. And the students knocked it out of the park.”

But why should anyone care about particle physics? Dr. Dong calls upon the testimony of the builder of Fermilab’s first accelerator, R.R. Wilson, who was asked about the use of an particle accelerator in protecting America and the space race.

“This new knowledge has all to do with honor and country,” he told Congress, “but it has nothing to do directly with defending our country, except to make it worth defending.”