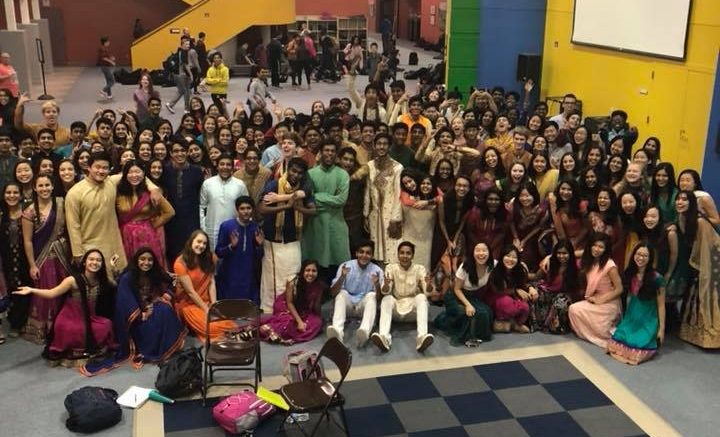 At IMSA, November is the month of Diwali. IMSA’s own Diwali show, an annual student-run production, features ten dances, solos, small group dances, musical performances, and a skit that ties them all together. The 2017 Diwali student show and parent show transpired this past weekend, and most would say it was a momentous success.

About 2-3 hours long, Diwali necessitates an enormous amount of practice and responsibility. Dancers engage in weekly practices, and their commitment is especially important the week of the performance, commonly known as “tech week” when they practice for 5 hours a day, Monday through Thursday. Choreographers and board members of the Indian Student Association (ISA) often spend even longer refining the dances, writing the skit, and planning the event to perfection.

The bar was set high for the Diwali show of 2017, but that bar was raised even higher after an extraordinary performance this past weekend. From the script’s romantic love story with a plot twist at the end to much awaited Senior Dance, Diwali did not leave anyone disappointed.

Pranesh Ravichandran (’18), who is a part of senior board for ISA, commented, “I’m really glad IMSA came together for this last Diwali. As a senior who has enjoyed Diwali for all three years, it was nice to end with a bang, and I really appreciate the support of the student body and ISA board.”

Rishi Modi (’18), a dedicated performer, expressed his contentedness with the show, saying, “Diwali is a fun way to spread Indian culture and we all kind of came together for one last time. The show took us out of the college mindset, and I am glad for this reprieve from the current stressful time. It’s sad to think that it’s over, but I am that I enjoyed while I could. I’m still waiting on that mixer though.”

While a subsequent mixer was not successfully hosted, the show was still a success. However, it was not without its own challenges.

The time commitment of the show is a problem for many performers. It is difficult for students at such a rigorous academy to balance schoolwork, college applications, and all the other pressures of academic, personal, and residential life. But to make the event as accessible to students as possible, ISA board has worked to minimize the time commitment as much as possible.

“This was the best Diwali for me, and I feel like we truly used tech week to its full potential. The growth in the quality of the performances before and after tech week was exponential, and it made me happy to see all the passion and dedication put into Diwali not only during tech week but over the past two months,” said ISA President, Abhiudaya Bhalla (’18). “The board worked tirelessly both over the summer and during the school year on the number of acts, show order, and a meaningful and powerful script. This will be my most memorable Diwali, and I truly thank everyone who contributed to it in some manner.”

As Diwali performers forget the struggles they faced while preparing for the show and instead focus on the happiness and the feeling of community that the show creates, it is this very positivity that makes the Diwali show so unforgettable.

Be the first to comment on "Diwali Lights Up IMSA"