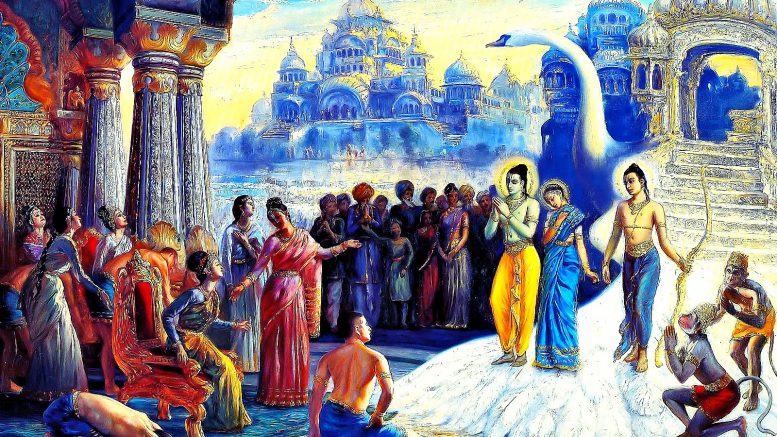 Rama and Sita return from gaining victory over the demon Ravana.

Each year in late October and early November, Diwali kindles an air of celebration at IMSA. Culture clubs hold henna-painting events, Bollywood film screenings, and food sampling opportunities throughout the week. A much-anticipated culture show stuns the audience with musical performances and skits.  Despite Diwali’s popularity, however, not everyone on campus is aware of its origins, or even its significance to those who celebrate it.

Observed by Hindus, Jains, and Sikhs, Diwali celebrates the triumph of good over evil. The Festival of Lights is the pinnacle of Diwali and occurs on the darkest day of the lunar month, November 7, where thousands of lights decorate the temples.

For Hindus, Diwali is commonly associated with the return of King Rama, an incarnation of the god Vishnu. When a demon from Sri Lanka kidnaps Rama’s wife, Sita, Rama raises an army of monkeys to build a bridge to Sri Lanka. There, they rescue Sita, kill Ravana, and assume positions of King and Queen in their hometown of Ayodhya. To celebrate their heroic triumph over darkness and the new era of rule, their people lit millions of oil lamps across the city in a tradition continued today. In an alternate but still popular version of events, Rama endures exile for 14 years before collaborating with his brother and the monkey king to gain victory over Ravana. Some believers also celebrate Diwali as the birthday of Lakshmi, goddess of wealth and fortune, and her marriage to Vishnu.

Sikhs also honor the return of a spiritual leader during Diwali. In 1619, Sikh Guru Hargobind Singh and 52 princes escaped from the Mughal emperor’s prison. Even before the date, Sikhs celebrated the holiday as the date the Guru laid the foundations for the holiest place in the religion, the Golden Temple. Sikhs continue to illuminate the Golden Temple in honor of the guru’s return.

Jains honor Diwali as the day that Lord Mahavir achieved Moksha, or release from the cycle of rebirth. In the Jain scripture, it is said that the heavens were illuminated with light to celebrate the spiritual leader’s newfound enlightenment. Jains continue to light lamps in remembrance of Lord Mahavir’s teachings of acceptance and harmony.

Despite the different stories, traditions remain similar among the three religious groups. Family and friends come together to exchange gifts and sweets. People decorate their homes with oil lamps or electric lights and watch spectacular fireworks displays. Depending on an individual’s tradition, the main highlight of the festival is a large feast that showcases immense culinary prowess. While Diwali is a day of spiritual reflection, it is also a time to reunite with family and wish prosperity to others for the new year.

Be the first to comment on "Diwali’s Incredible Religious Origins"