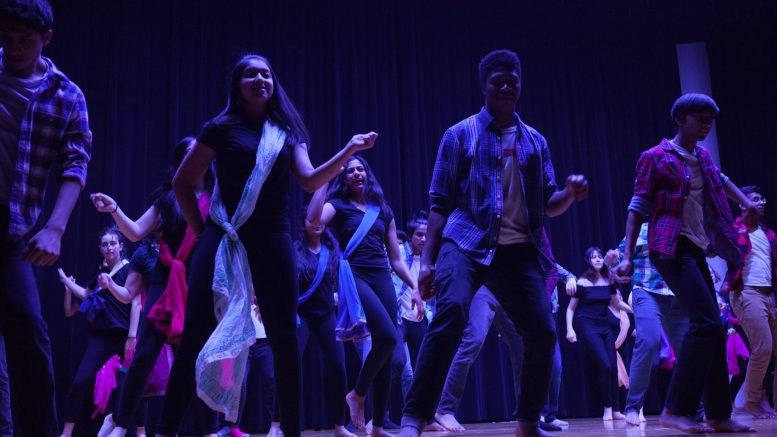 On Friday, November 16th IMSA’s hallways were filled with vibrant colors and students dressed in Indian-style clothing in celebration of Diwali, the Indian festival of lights. Although the official holiday occurred on November 7th, IMSA’s own Diwali celebration occurred a few days later. To celebrate the holiday, ISA (Indian Student Association) spent 3 months preparing a 2 hour-long Diwali show filled with dancing, singing, and a skit that tied all the acts together.

The show began with renditions of both the Indian and American national anthems, sung by Ahana Narayanan (’21), Chandra Gangavarapu (‘21), and Liza Kuzmina (‘20). Soon after, the skit began and the main character, Karan (nicknamed Chotu), appeared on stage holding an “Oscar award” and began watching a video he made in high school about his struggles being Indian American and having to face stereotypes from both his peers and parents. Between scenes of the skit, there were class dances, individual dances by Sibil Shibu (‘19) and Meghana Karan (‘20), group dance, modern dance, boys dance, girls dance, Mod 21, singing acts, and a fashion show. The acts were lively and entertaining, while the skit itself was more serious.

Compared to previous years, this year’s script was more serious and focused on the issue of Indian stereotypes. “Although stereotypes may not be as prevalent at IMSA as other places, they’re still an issue outside of this campus, so we thought it would be good to talk about it. Also, historically the Diwali show is funny, so we thought it would be good to do something else this year and focus on something more serious” said lead actor and member of the script team, Ishan Nikam (‘20). However, this decision was met with differing responses. Some enjoyed the script, while others felt it didn’t live up to previous years. “I felt like it could’ve been better. It could’ve been more controversial, which would’ve been more impactful, because it was kinda watered down”, commented Jemea Hilmara (’20). “I think this year the script fell short, the past two years it was funny, and this year I think they tried to give it a more serious tone, but I think it could’ve been better. I think they tried to make it both funny and serious, and that made the script too ambiguous” said Sol Hwangbo (‘19). Others enjoyed the skit, such as Saisu Talasu (’20) who commented that “It was not as funny as last year, but this one had an idea it was trying to convey. The acting was pretty good in my opinion”.

While the skit elicited differing opinions, the show itself was enjoyed by many, and it was clear that the 3 months of hard work put in by around 150 participants had paid off. ISA Co-President Teja Guntupalli (‘19) said although he was worried about the show, “it came out well, and everyone came together in the end and it was amazing to see the work of everyone unfold and create a great show.” Additionally, those who attended the show enjoyed it. “The show overall was awesome… the lighting accented the dancing well. Especially in a few of the dances when the performers danced in a large circle. Modern was awesome as well. Overall, just a great show” said Rowan Eggert (’21).

In addition to the culture show, there were other events throughout the week to celebrate Diwali. This year, ISA “had the revolutionary event of having sparklers for the students after the Friday Show” and “new midday events such as Mango Lassi shots on Monday,” said ISA Co-President Sibil Shibu (‘19). Overall, IMSA’s celebration of Diwali was a success, and ISA’s mission of sharing Indian culture across campus was achieved.

Be the first to comment on "Diwali 2018: A Cultural Celebration"