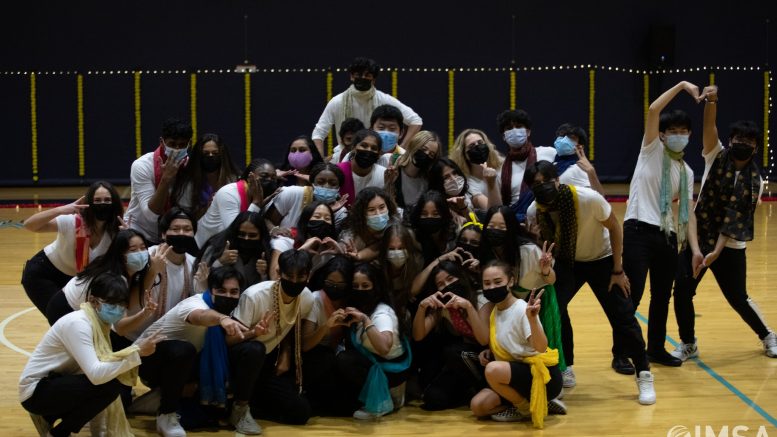 After spending more than a year remote, students finally returned back on campus in August, under strict enforcement of masks, social distancing, and limitations on residential hall activities. Even with these regulations, students embraced being on campus, especially because of the return of an important IMSA tradition – in-person culture shows. These shows are traditionally filled with well-crafted dances, an engaging dramatization, and most importantly, a celebration of a group’s culture.

First up this year was Diwali, held by IMSA’s Indian Student Associated (ISA). Last year, ISA had partnered with Asian Students in America (ASIA) to jointly produce Luwali, but this year, ISA chose to operate independently and return back to their standard set. To learn more about Diwali this year and the experiences organizing it, The Acronym sat down with Niyati Kapadia (’22), President of ISA, and Pranav Patel (’22), Senior Board Member of ISA.

Held under pandemic circumstances, COVID-19 was certainly a looming challenge for ISA. Kapadia shares, “Diwali was a wild ride, especially coming from an all-online setting and a different format of the culture show from previous years. With the uncertainties of life at IMSA with COVID-19 regulations in place, it was so difficult to even start the planning or get definite guidelines to follow.” Patel agrees, sharing that “organizing Diwali was definitely more complex than normal.” COVID-19 regulations influenced the show in two manners: first, location and second, food. Kapadia revealed that “ISA was not allowed to have their show in the auditorium like normal or use certain practice spaces because of the building closure.” Instead, ISA was forced to use the Main Gym for the night of the show and dancers were told to practice in open spaces (like West Gym, Student Union, and Old Cafe).

As for food, Kapadia told The Acronym that ISA “wasn’t able to receive or serve any home-cooked food to the students. Even catering through a restaurant and prepackaged foods were not approved.” Historically, food has been a critical component of Diwali, partly why Patel was disappointed by the decision. “Food is so important to Indian culture and it was really sad to see that we couldn’t have food. But, since we couldn’t change the decision, we decided to find other ways to still make our show great.”

Those ways, for ISA, came through the actual structure of the show. This year, ISA added a new act to the lineup, Garba/Raas – a personal highlight for Kapadia, she shares that “it was amazing that we could include another regional dance.” A full version of the Garba/Raas dance can be found and viewed here.

ISA continued their tradition of having events during midday. This year, ISA had three total midday events: a diya decorating event, a mehndi/henna event, and a midday dress up event with students rocking their best traditional attire. Patel, who gave a big shout to ISA junior board for organizing the events, specifically enjoyed the diya painting event, provided that it has not been held in previous years. Pictures from the dress-up event can be found here.

After much work, the day of the show (Friday, November 12th) came around. Due to COVID-regulations, parents were not allowed to attend the culture show in-person and were instead sent links to digitally view the show. Students, however, packed the bleachers, attendance numbers in the hundreds. Right around 6:00PM, the two MCs of the night, Patel and Saketh Dontaraju (‘23), entered the stage, expressed a few thank-you’s, and introduced the first act of the day. Soon after, the two moved through the schedule of the night, which can be found here, mixing their introductions of dances and individual acts with jokes. Patel shared that “he was nervous at the beginning, but as the show picked up, the audience was lively and receptive which really helped him.” Once all acts had concluded, Patel, Dontaraju, Kapadia, and Rujuta Durwas (’22) united on the stage, closing the show off with some last remarks. Pictures from the night and tech-week dance recordings can be found here.

Though there were some technical difficulties and not all events occurred by schedule, IMSA students enjoyed Diwali. Nandana Varma (’23) shared how she now felt “more encouraged to participate in other culture shows this year.” Divya Brahmbhatt (’24), a dancer in this year’s Boys Dance, shares a similar sentiment, “feeling really happy about how their [the dancers] efforts turned out in the final show.” Atharva Gawde (’23) shares that he specifically enjoyed the mehendi midday event, and how he “loved to see people of all backgrounds have mehendi on their hands.”

For now, ISA rejoices in a tumultuous, yet successful Diwali, sending special appreciation to ISP for technical support in recording and editing the final film that contains all dances and script. Now with their culture show finished, ISA wishes the best to ASIA, Black Student Union (BSU), and Alma Latina for their respective culture shows and looks forward to holding events throughout the coming semester.

Be the first to comment on "Diwali 2021 In Review"