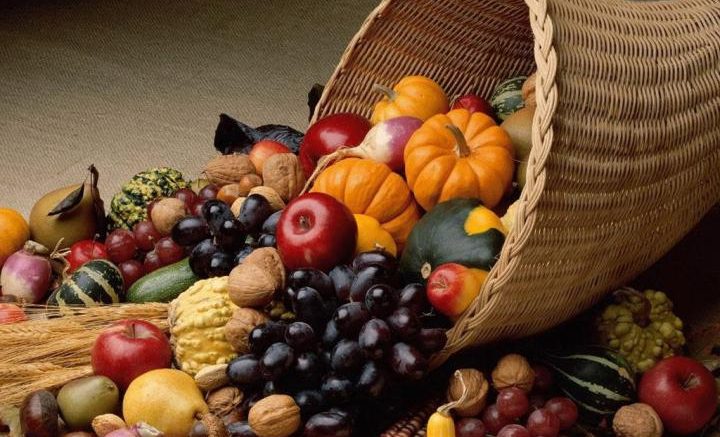 A cornucopia, an example of a Thanksgiving tradition that did not come from the original feast. Source: The Old Farmer's Almanac.

As families all over America prepare to settle down for a feast this November 23, many believe that the celebrations date back to the pilgrims and the native tribes sitting down and enjoying a bountiful feast of turkey, mashed potatoes, and cranberry sauce. However, this mirage is an untrue and misleading story that hides the true history of Thanksgiving.

Backtracking to before the actual feast, which lasted three days, the Europeans found a man named Squanto, the only living member of the Patuxet tribe. Prior to this trip, “a band of English explorers sailed home to England with a ship full of Patuxet Indians bound for slavery.” As stated by Susan Bates, what they left behind before leaving was smallpox, which wiped out any of the tribesmen who had managed to escape enslavement. Squanto helped teach the Englishmen and save them from the harsh new environment. Later, the Wampanoag tribe assisted and both Squanto and the tribe attended the first Thanksgiving feast.

Much is unknown about the actual original celebration; however, it is recognized that most of the people who attended were from the Wampanoag tribe.

Although it is not known as to exactly why they were celebrating, it is likely a celebration of their own survival.  According to Richard Greener, an author for the Huffington Post, around Thanksgiving, a group of heavily armed hunters “returned from their journey to what is now Mystic, Connecticut where they massacred 700 Pequot Indians.” The feast could have been celebrating their return or some other reason; however, it is known that the Wampanoag people were not invited so that the pilgrims could share the fruits of their labor with them.

Prior to this, the Wampanoag people had experience with Europeans, and according to Bates, “for the last hundred years they had also had encounters with European fishermen and explorers but especially with European slavers, who had been raiding their coastal villages.”

Then why had the tribesmen helped the white settlers? Because their religion enforced giving charity to the helpless and anyone who came to them with empty hands. Their relationship was already strained, as was it between the Europeans and most native tribes.

However, during the actual feast, the Europeans and the native people were at peace. Unfortunately, this was short-lived, and barely ten years later, with the arrival of thousands of new Europeans, “a plague drastically cut the native population by what’s believed to be more than half.” As recalled by Melissa Chen of Time Magazine, “the arrival of new settlers prompted a fight for land and rising animosity.” Following this was the outbreak of war in 1675 that crippled the native population.

Thanksgiving is a day to celebrate what you are thankful for; however, the original holiday was not so straightforward and warm-hearted. The wars that followed caused the native people to suffer numerous deaths and enumerable suffering. Even though our holiday has mostly separated itself from the original feast, it is important to remember the history of the United States country, especially during the day in which we celebrate what we are thankful for.

Be the first to comment on "Thanksgiving: The True Story"