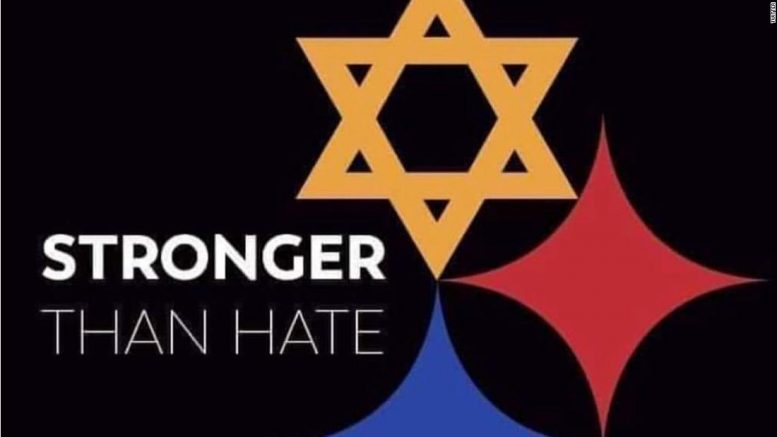 The Pittsburgh Steelers logo remade to honor victims of the shooting at the Tree of Life synagogue. Originally created by Tim Hindes.

When I was younger, I never liked being Jewish. To me, my religion meant Hebrew school after normal school, fidgeting at Torah services, and being told to believe in an omniscient, omnipotent, omnipresent entity without sufficient space to question. And so, after my Bat Mitzvah in 7th grade, I stopped going to Hebrew High School. Without that forced interaction with the religion, I was as separated from my Jewish identity as never before, and I discovered that I really, really missed it. I missed running out of Saturday morning services early to be first in line at the dessert table for Kiddish; I missed flipping the Siddur with my closest Hebrew school friend, stopping on a random page, and seeing who could read the Hebrew the fastest; I missed my Hazzan slipping me fruit snacks when the Rabbi wasn’t looking; I missed running up and down the plush, carpeted red staircase in the mahogany library; I missed the hauntingly beautiful cantillation of the prayers; I missed the piercing sound of the Shofar. I missed it all. And it was then that I realized that Judaism is so much more than a religion. It is a culture. It is a community. It is a home, one in which I always felt safe. That is, until a man named Robert Bowers walked into the home of my people, a home with dessert tables at Kiddish, Hazzans with fruit snacks, mahogany libraries, and piercing shofars. A man named Robert Bowers walked into my home with an assault rifle and multiple handguns and shot as many Jews as he could, his only regret at the end of his rampage being that he wasn’t able to kill them all.

Do you know what it’s like to feel terrified? To sit on your bed, shaking, sobbing, because you quite literally fear for your life? Some of you do. You’ve said it before, how you can’t walk alone at night or wear a hoodie or smile at the wrong person or sit next to the wrong person or simply be in the wrong place at the wrong time, and I thought that I listened, I thought that I understood, but I didn’t because I’m sitting here wondering how I’m going to get up and do my homework and pretend like being thankful that my friends who live in Pennsylvania weren’t killed is normal, and that is your life. And I’m so sorry.

For Saviour’s Day 2018, Louis Farrakhan, a prominent religious leader and black nationalist, said that “Farrakhan, by God’s grace, has pulled the cover off of that Satanic Jew and I’m here to say your time is up, your world is through.”

One of the leaders of the Women’s March was in attendance at that speech, and they initially refused to condemn his words.

On October 16th, Farrakhan posted a video on Twitter captioned, “I’m not an anti-Semite. I’m anti-Termite.”

In 2005, Barack Obama took a photo with Farrakhan, a photo that was then purposefully hidden during his campaign.

After a bomb was sent to George Soros’ house, House Majority Leader Kevin McCarthy tweeted that “We cannot allow Soros, Steyer, and Bloomberg to BUY this election!”

Anti-Semitism cannot be attributed to the thoughts of the extreme right or left: it has permeated mainstream ideologies. It is dangerous.

Look at what anti-Semitism has done.

I may have passing privilege, but I still live in fear.

I am not safe here.

I am so scared.

I love being Jewish. I love that I am a part of this beautiful community. I am proud of all that we have overcome. However, I am terrified. I am terrified because anti-Semitism still exists and we, as a society, refuse to acknowledge that it isn’t just the man with the beer belly and the Southern drawl asking if the Kippah on my Hebrew school teacher’s head is to hide his horns. It’s the man who motivates and inspires the African American and Islamic communities, the man who never voted for Trump and never will, the friend who “jokingly” posted on his timeline something about Jews and ovens. I am terrified because our oppression is often minimized due to the color of our skin (while the majority of Jews are light-skinned, this is of course not applicable to everyone), and the fact that “we’re all doctors and lawyers.” I am terrified because I live in a predominantly Jewish area, just like Squirrel Hill, where the shooting happened on Saturday, October 27, and my synagogue had to send an email out to our entire congregation reassuring us that the windows are bulletproof and the clergy members carry panic buttons with them at all times. My synagogue is unmarked on the front. How long have they been preparing for this?

Look at what anti-Semitism has done.

The night of the shooting was Shabbat, the Jewish day of rest. Jews who are shomer Shabbat did not use technology during the day.

I want you to think of Jerry Rabinowitz, David Rosenthal, Cecil Rosenthal, Rose Mallinger, Bernice Simon, Sylvan Simon, Joyce Feinberg, Richard Gottfried, Daniel Stein, Melvin Wax, and Irving Younger. A husband, a wife, a brother, a sister, a doctor, a vivacious personality, a kind-hearted neighbor, a joyous man who would often tell others about his fear of dying. Rose Mallinger was 97 years young and lived through multiple wars and the worst persecution of her people and died in 2018 because anti-Semitism still exists. Cecil Rosenthal, an intellectually disabled man who greeted every single congregant as they walked in, lived a life of happiness and kindness and died in 2018 because anti-Semitism still exists. Jerry Rabinowitz wore a bowtie to work every single day and was a trusted physician always willing to go the extra mile for his patients: the one life that he could not save, however, was his own, and he died in 2018 because anti-Semitism still exists. Because hate still exists. Because darkness still exists.

The Jewish community has been broken before, and we always come back, battle-wounded yet determined. But something happened today, and, more so than ever before, I am absolutely terrified.

Hannah Senesh, a Jewish resistance fighter, wrote “A Walk to Caesarea” in 1942, best known by its opening lines, which are commonly played on Yom Hashoah, Holocaust Remembrance Day:

may it never end –

the sand and the sea,

the rustle of the water,

the brilliance of the sky,

the prayer of man.”

I never want this to end

I want to feel the sand, I want to hear the sea

I want to feel the waves crashing over me

I want to gaze at the sky streaked with stars

And be in awe at my own insignificance

I haven’t lived yet

Please think of us.

I don’t want to die.

A Response to “On Hate Crimes and Hoaxes”

2 Comments on "Look at What Anti-Semitism Has Done"