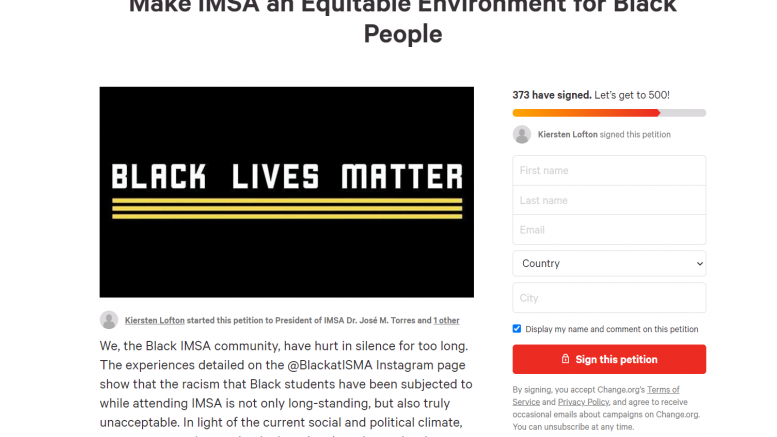 The "Make IMSA an Equitable Environment for Black People" petition

The following is an editorial from an IMSA student. This letter has been reviewed only for the appropriateness of its language, and no edits have been made to its content, claims, or assertions. The Acronym supports respectful discourse about the challenges facing our community and welcomes comments on this article that uphold that standard.

The Instagram page,” Black at ISMA,” has released a petition containing a list of “non-negotiable demands,” many of which are problematic for a multitude of reasons. Ironically, many of the demands are racist, discriminatory, or otherwise harmful to the IMSA community at large, and would likely damage IMSA and its community beyond repair if enforced.

The single largest problem within this list of demands is just how frequently these demands can be exploited. In the first demand of the petition, for example, there is pressure exerted to define terms such as “bias incident”, and “hate crime”, a request which is not problematic on its own. The danger of this demand comes in which definitions they require to be used as a template of sorts. Pride Legal for example, defines a bias incident as,” statements that are offensive or racist but are not illegal. These incidents are types of prejudice that are not criminal offenses because legislators have decided not to criminalize them, or because they are protected under the First Amendment. Examples include hate speech, religious slurs, sexist jokes, offensive graffiti, or remarks on social media.” The use of the term “offensive” in this definition allows students and staff to label whatever terms they want as “offensive” and thus file a bias incident report, which, based on later demands, would allow students and staff to essentially purge political dissent from IMSA.

The second demand of the petition expands and expounds upon the issues of the first one by defining punishments that must be associated with those definitions described above. Notably, this demand specifies that a “hate crime” warrants removal from the academy. It is important to understand that violent conduct at IMSA is already strictly prohibited, and grounds for removal from the academy. Regardless of the motivation, any violation of IMSA’s student handbook should be punished based on the action, not the reasoning behind the action, with the exception of if the action could reasonably be justified, such as through necessary self-defense.  This means that assaults, harassment, and the like should be treated the same in discipline regardless of if it is motivated by race, sex, sexual orientation, political affiliation, or any other factors, as to do otherwise would be giving preferential treatment to some groups over others.

The demanded punishments for bias incidents will do nothing but create contempt amongst all parties involved, and potentially even radicalize people by wasting their time and energy, especially if it’s a case where the individual was wrongfully accused and disciplined. If it was a case where there was legitimate cause for discipline, it would only serve to strengthen one’s racist or otherwise discriminatory beliefs about whatever group they were biased against, and thus make them more inclined to hate and be intolerant of said groups, even if they were to be less vocal about it.

Further expansion of this problem can be found in the reactive portion of demands, many of which give to Black students disproportionate power over the records and livelihoods of staff and students. As these demands are written, all it would take is one accusation, whether true or not, to ruin the life of a student or staff member, as being dismissed from an academic institution for racist conduct or whichever terms you want to use will essentially ruin one’s chances at the majority of other institutions. Additionally, there are multiple demands which require the invasion of students’ privacy, by requiring that student dropout statistics be made public, and that bias incidents be brought up to the parents of students, not just the parents of the students involved.

Another glaring issue throughout the petition is the blatant racism within many of the demands. A major example of this being found in the fifth Preventative demand, which mainly requires that 15% of staff be Black, and the same proportion of staff be Latinx within 3 years.

This demand presents heavy problems, as it is racist by nature. A critical problem is that this explicitly calls for holding the minority staff to a different standard to be hired than other staff. This is a very racist idea, as it implies that these minorities are not mentally capable of achieving these things on their own, and even creates a situation where minority staff doubt whether they got the job due to their own qualifications or just to fill a race-based hiring quota. This encourages the onset of imposter syndrome, and will cause some staff to be overwhelmed, potentially even causing mental health issues as the stress of the position combines with the imposter syndrome, especially given what has been observed in colleges which have put these sorts of hiring quotas in place. It is critical that students and staff be selected based on qualifications alone, as to do otherwise is both discriminatory to people of certain groups, and is harmful to the mental health of staff, as well as the education of students. It would be infinitely more inspiring to see minority staff get positions based on their qualifications, and not just to fill a quota of “at least 15% of IMSA’s faculty.”

Another major factor to consider is the effects this would have on the publicity of IMSA. Holding minority staff to a different standard than other staff members in this way would inevitably result in IMSA no longer being able to claim what it does now in regards to the credentials of its teachers. Requiring less formal education would mean that the academy would end up being unable to claim that all teachers have at least a Master’s degree. This would also mean that our teachers would be less specialized, and less educated in the subjects they are teaching, harming the education of all students, including Black students. It is critical that we do not sacrifice the quality of our education in the name of artificially increasing the diversity of our school.

Additionally, demands such as the fourth Reactive demand afford certain privileges and options to Black students which are not being made available to other students. This is openly discriminatory, as students who are not Black can and are often victims of bias on the IMSA campus. Regardless of how likely any given group is to use these “stress days,” the option must be available to anyone who chooses to use it. To make any demand otherwise is racist and generally discriminatory.

To “Black at ISMA” and those who support them: I hope that you take this criticism to heart, and revise your demands, at the very least, to be fair and equitable to everyone. It is important to understand that if these demands in their current form are sent and subsequently enforced, it will create a massively hostile environment for everyone on campus in which no one feels safe. I implore you to find a way to help Black students on campus feel safe which don’t involve infringing upon the rights of others and fostering malcontent among students who already feel unsafe expressing their thoughts for fear of a false claim of racism, among other possible labels. Instead of drafting demands in a vacuum, please talk to people outside of your group. The Right-leaning students at IMSA want to help you, but this list of demands which you have released is out of the question.