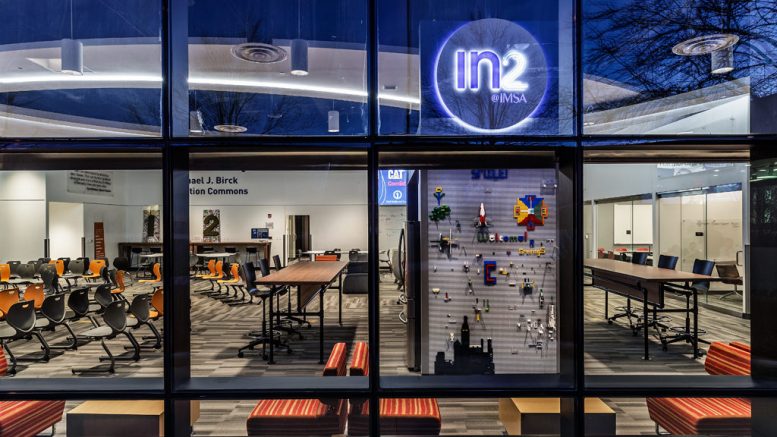 IN2, exterior at night

According to a recent email from Dr. Jose Torres, President of IMSA, a loss of student fees from distance learning and outreach programs has resulted in a 2.45 million dollar revenue shortfall for the upcoming school year. In response to this shortfall, serious reductions in force (RIFs) recently occurred at IMSA. These lay-offs focused largely on student-facing staff, with the full list composed of six safety and security officers, three custodians, three day hall monitors, two resident counselors, two lab managers, one administrative support assistant in the Principal’s Office, one library clerk, one statewide student initiatives associate, one administrative assistant in the Center for Teaching and Learning, one IN2 Center Associate, one Receiving / Inventory Clerk, one Grounds Worker, one Maintenance Mechanic, and one History Teacher.

Large reductions to the Student Inquiry and Research (SIR) Program were also made. According to an email from Dr. Torres, “[we will] suspend the program off-campus. We must also reduce our on-campus SIR programs.” Based on information that has been released to the IMSA community, no members of administration received salary reductions, lay-offs, or furloughs.

We interviewed Dr. Michael Hancock, a teacher in the English department and the president of the recently established Teachers’ Union (the IMSA Council), about how the Union has responded to the recent layoffs. As Dr. Hancock recalls, “[the union] had concerns about detrimental effects of faculty cuts on the student experiences — certainly on teaching and learning, and more than that. For instance, the lab managers do so much more than provide instruction or support for instruction. They help with a lot of extracurricular activities, and they help to ensure the smooth functioning of our overall science program.”

Upon initially learning about the upcoming RIFs on June 25th, the Union submitted a letter to the Board detailing questions and concerns about the RIFs and related decisions. The letter highlighted the Illinois State Board of Education’s (ISBE) recommendation that “staff hiring should be increased, not reduced, to better support students during this transitional phase” and emphasized the effects of these RIFs on the students. Among other questions, they asked how the school would weigh various factors while making decisions and what the decision-making process would be. The letter concluded with the assertion that “The Council stands willing to bargain the impact of justified reduction in force decisions that are made in accordance with Board policy and demonstrated budgetary needs.”

However, it was not until much later that the administration responded to this letter from the Union. According to Dr. Hancock, “We sent all those concerns and questions to the Board and to Dr. Torres, before the special board meeting [where RIFs were decided]. And we heard nothing in response, which is very disappointing, especially because IMSA as an employer has a legal obligation to bargain the effects of changes in working conditions.”

It was not until over a week later, after the administration went ahead with the Board meeting and had a town hall meeting to announce the RIFs, that they responded to the letter from the Union, after the Union was on the verge of filing an Unfair Labor Practice complaint against IMSA. At that point, IMSA stated their intention to bargain the effects of these cuts, which, as Dr. Hancock says, “is just saying [they] are going to live up to [their] legal obligations.”

One of the Union’s major concerns about how these RIFs will affect students centers around class sizes: “I think that one big concern that faculty has is that some class sizes certainly will increase in the fall and the spring, despite assurances to the contrary from Dr. Torres that were shared at the town hall on July 2nd… This will be done in a remote learning environment, where we know from research that smaller class sizes better serve students,” says Dr. Hancock. While faculty were reportedly assured that class sizes would stay the same, since a faculty member of the history department was part of the reductions in force, history classes capped at 25 in the past are likely going to grow, especially for junior and senior classes.

Despite the budgetary restrictions that the administration is suffering, the search for a Dean of Academics and Equity and a Dean of Student Support and Equity continues, as noted in the Board Report for the July 15th Board Meeting. In their letter, the IMSA Council posed a striking question about these actions: “what, then, does the administration value more: maintaining current teacher positions or adding new administrative positions?”

Dr. Hancock echoed this sentiment, explaining that teachers asked “point-blank [at the Town Hall] if any administration cuts were made, and that question was never addressed. It was just passed over and ignored by Dr. Torres and others. So you would have to ask him what his justification is for not making administrative cuts in addition to faculty and staff cuts. Really we have seen a number of departments across the academy affected, but admin has been left relatively untouched.”

The fact that cuts affected primarily student-facing staff is particularly problematic because the 2.5 million dollars in budget shortfall came primarily from decreased revenue from student fees, outreach programs, and a loss of grant funding. However, Dr. Hancock notes that, “none of those revenue sources pay for faculty salaries, yet teachers and academic support staff were cut. When you have a loss in one area that has nothing to do with core academic programs, why [should] our teaching and learning staff have to bear the brunt of that reduced revenue?”

News about the RIF decisions reached the student body and alumni network on July 3rd, primarily through various Facebook pages, and the IMSA community rallied in support of the recently laid off faculty and staff. Students sent out waves of emails to state legislators and the IMSA administration, and a petition was started appealing against the layoffs that has already garnered over 500 signatures. Levi Raskin, a graduate of the class of 2020, has been a leading voice in rallying student support against the RIFs. In an email sent to nearly every Illinois politician, Raskin explained that “the Illinois Mathematics and Science Academy changes people’s lives. It should be a nonpartisan issue, the pride of the state. It changed my life, certainly, but its ability to effectively teach has been repeatedly hindered by the current administrative apparatus… IMSA will not survive under the current top-heavy administrative structure.” A similar sentiment has been echoed in emails sent by other current and former students.

Dr. Hancock himself urges that the administration “ask for more input from a broader cross-section of IMSA stakeholders before making decisions that have a detrimental effect on the student experience” moving forward. He fears that Dr. Torres’ “cabinet, and to some extent, the Board to Trustees, serve as an ideological echo chamber and that we do not have a diverse set of perspectives [that] would inform better, sounder decision making for IMSA.”

Above all, Dr. Hancock stresses the need for better communication between the IMSA administration and the IMSA community: “So many staff, students, and parents are frustrated by the lack of transparency shown by the administration in this process, and also by a lack of communication regarding the RIFs… The communication has come after the fact, and I would characterize it as fragmentary and ultimately unsatisfying.”

At their core, much of the frustration surrounding the recent RIFs stems from a single place. As Dr. Hancock explains, “IMSA is first and foremost a high school. It is a very special school like no other, but when there are budget gaps, the last thing we should ever do is make cuts that compromise [the] student learning experience, unless that is the only or last option to keep the doors open.”

Editor’s Note, 7/16/2020: A previous version of this article quoted State Representative Barbara Hernandez from an email shared with Dr. Michael Hancock. At Representative Hernandez’s request, this quote and the paragraph containing it has been removed.

Editor’s Note, 7/12/2020: In town hall meeting with students and parents, Dr. Torres suggested that some off campus SIRs may be allowed to continue in 2020-2021. What this means for current or future SIR staffing has not, as yet, been addressed.