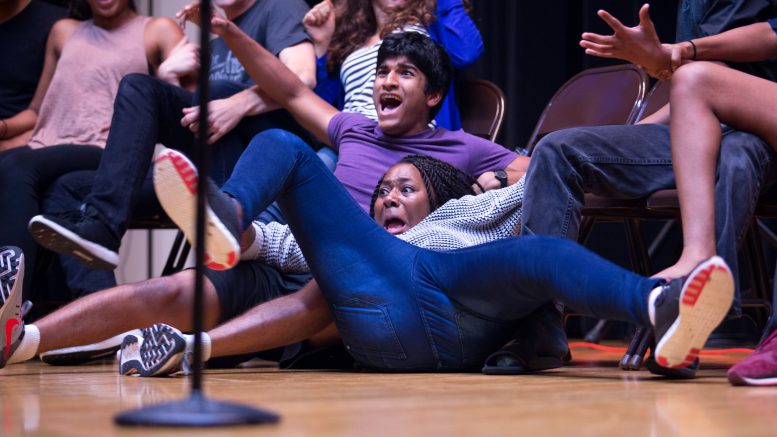 Ram Koganti (’17) and Sona Fokum (’18) fall off of their chairs while under a hypnotic state.
Photo Credits: Andriy Cheptunov, ISP

On Throwback Thursday, students started off the day dressed in black and white to create a “Film Noir” ambiance. After last night’s epic conclusion to the class competition, many throats were hoarse and tired, though class pride still ran rampant. Congratulations to all of the classes & their outstanding performances!

During Midday, students braved the long line and chaotic mess for tickets to the highly-anticipated Hypnotist Show.  At the same time, many of other students participated in Oreo Slide, where they placed an Oreo cookie on their foreheads and used their facial muscles to slide the cookies to their mouths. Though only a few were successful, it was amusing and entertaining to see the facial expressions of the students as they struggled to eat a single Oreo cookie.

In the evening at 6:40 p.m., the lucky ones with tickets in hand filed into the Auditorium. Hosted by the hypnotist Jim Wand and his assistant John Green, the show was phenomenal. This year, the show featured students from all classes including Hunter Kiger (‘19), Diego Alanis (‘18), Katya Bezugla (‘18), Sona Fokum (‘18), Igor Zhuravlyov (‘18),  Kasey Cervantes (‘17), Yoanna Ivanova (‘17), Nitya Talasila (‘17), Srivarun Tummarakota (‘17), and many other enthusiastic volunteers. The activities included marionette acts, freestyle dancing, fervent orchestra performances, and feats of heroism.

Throughout this year’s Homecoming week, the entire IMSA student body came together and bonded over team efforts and class pride. During the Hypnotist Show, the bonds of friendship prevailed above all else, and the sense of community was stronger than ever, especially at Chef John’s farewell today at 4:20 p.m. Although the Homecoming week events may have ended, there is still the Homecoming dance; tickets are still available for purchase during midday and at the door. Here’s to A Night in Paris & the memories to come.