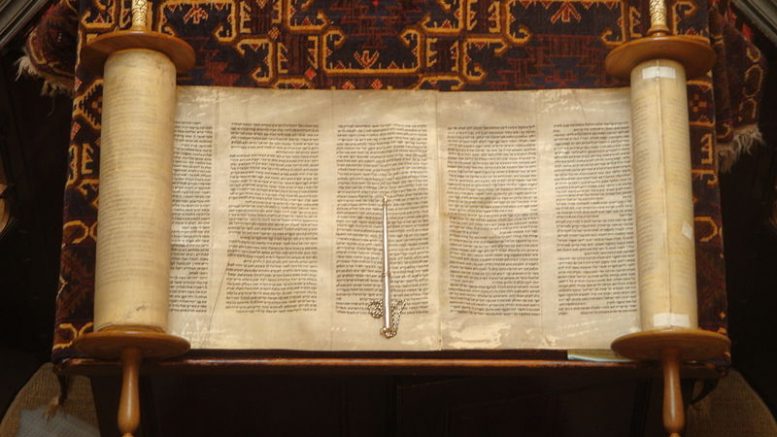 A picture of the Torah, the holy text of Judaism. (Photo by Wikimedia Commons)

On this day, two very different events clash: 1) the March for Black Women, a social justice campaign for all victimized black women, and 2) Yom Kippur, the holiest day of the year for Jews. This has ignited the latest in a set of fiery debates within the feminist community over intersectionality, hypocrisy, and whether the Jewish population is “white” or a separate race altogether.

I can acknowledge that September 30 has a separate significance to the black community, as a day during the “Red Summer” where race riots led to a state-sanctioned massacre. However, I take issue with Mamablack.org’s statement that “our issue is with a social, economic and political system which bequeaths such privilege and special rights to one group of people or persons, to the point that this group or anyone from this group would presume to tell Black women what to do, when to march, what day is appropriate to fight for our safety, dignity and freedom—with no regard for Black women’s lives or the impetus for their march.” While the Jewish population does enjoy a certain amount of passing privilege, we are by no means safe here. We are the persecutor when it suits groups to be anti-establishment, and we play the persecuted when it suits the establishment to fear differences. My religion does not enjoy the same comforts that Christianity is rewarded, but our hardships are generally forgotten because we “look white.”

Unfortunately, IMSA is no different. You see, while September 30 is both Yom Kippur and the March for Black Women, it is also an important day for the IMSA community: Homecoming.

I’ll admit, this sequence of events is all too familiar. Even in my predominantly Jewish old school, I was used to missing school days for important religious holidays. At IMSA, I realize that I am in the minority, and I know that there is no legal obligation to not put a school dance on a holiday that only few people celebrate.

But come on, guys. At a school that preaches diversity and acceptance, I am at a loss as to how this follows the mantra that most kids have committed to memory. How will we learn to treat each other with respect if the person who decided the date for Homecoming noticed the little text bubble that said that it was Yom Kippur, willfully ignored it, and received no backlash? How will we appreciate people from all walks of life if Christmas and Easter conveniently fall during Winter and Spring Breaks, but Administration has allowed the holiest day of the year – in a religion that we know enough about to make memes in Facebook groups – to fall on Homecoming, a day that is basically the antithesis of everything Yom Kippur stands for?

I don’t want to point fingers. I would much rather write about whether I am a dog or cat person (100% dog person, if you were wondering). But, it is clear to me that this is an issue that is meant to slide uneventfully by, and I am not going to let that happen.

IMSA, I need you to practice what you preach. If you preach acceptance, then accept me. Allow me to enjoy all aspects of this school, both academic and social, just like everybody else. Be cognizant of my needs and do not brush them aside, even if there are only a few people who have the same one. If you preach diversity, then appreciate me. Let me feel like I do not have to choose between my religion and my happiness. If you preach respect, then respect me. Let me feel welcomed and a part of this community.

“Love your neighbor as yourself,” states the famous Biblical command. IMSA, I love you with all my heart. It’s about time that you start loving me back.

Be the first to comment on "The Homecoming Hypocrisy"