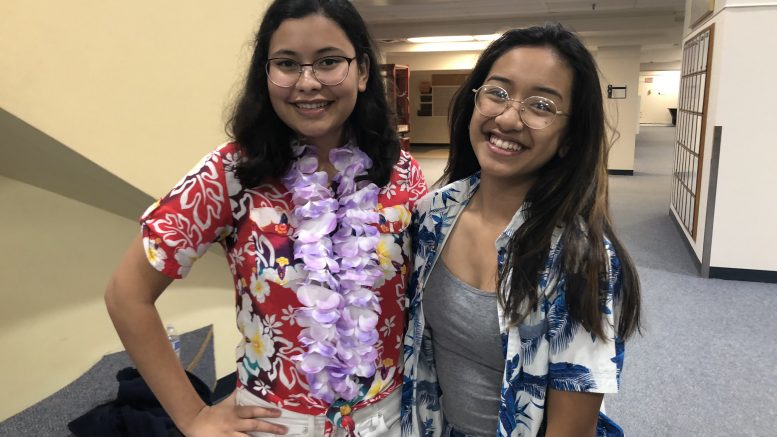 Day 2 of homecoming week kicked off with Tourist Tuesday. Well suited to the 80-degree temperature of Aurora, students sported bright floral patterns, cargos, and fanny packs to become the best-dressed or tackiest summer traveler. Although some students chose not to dress up, Wednesday’s groutfit day should draw in more happy participants with the casual sweatpants and sweatshirt theme.

During Midday, members of each class crowded onstage in Sodexo to dress contestants for the fashion show event. As “Dancing Queen” and other throwback hits blasted in the cafeteria, students decked contestants Jonathan Gao (‘21), Ray Shang (‘20), and Ethan Saquimux (‘19) in tin-foil outfits. After each contestant walked the Sodexo stage runway, residential Counselor Kevin Lim determined the winner. Juniors came in first place while sophomores and seniors tied for third.

Throughout the day, classes struggled to determine solutions to the abstruse riddle of “My Grocery List.” Even with clues hidden in A-wing, students continued their search for answers past midday, which prompted the release of an additional clue. In the end, seniors came in with the win after submitting their answers around 1:00 pm, followed by juniors and then sophomores, who deliberated on the riddles into the night.

The last event of the day was Capture the Flag, where at least eight members from each class participated in a heated competition in the West Gym. Even though severe weather forced the event to move from the soccer field, class spirit remained high as competitors dedicated all their athletic abilities to win on behalf of their class.  After an hour and a half, the junior class snagged the final flag –  and an unexpected first place ranking. They were followed by seniors, then sophomores. Perhaps the sudden climb of the Class of 2020 foretells future events; will juniors outscore seniors for the second year in the row? Only tomorrow’s events and Pep Rally may tell.