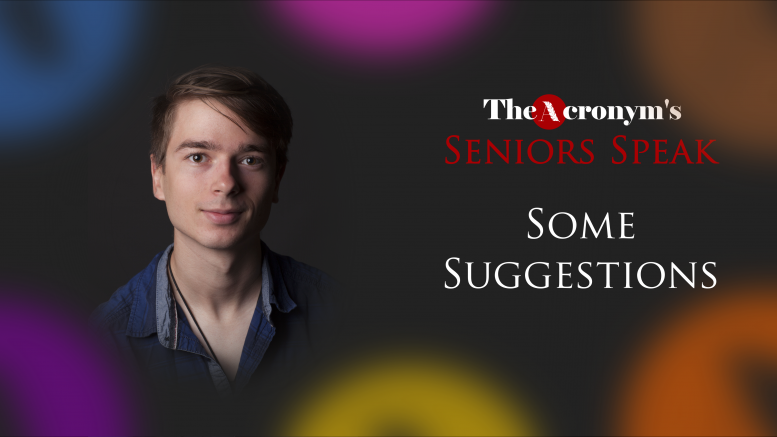 Christoph Eckrich (‘16) submitted this article as part of our annual Seniors Speak series. This series is designed to give seniors who are leaving a final opportunity to share their voice and preserve the traditions and experience of IMSA’s seniors alive long after they’ve graduated. Christoph lived in 1507 where he worked as the Community Developer (CD). He also worked as the Chair of SocEnt and as various roles with the Junior Statesmen of America (JSA).

When I was thinking about what to write about, I read through quite a few of the old senior speaks. I was sort of dissatisfied for various reasons, but I won’t get into that. The fact was that any of the advice that I wanted to give, I figured I wasn’t really qualified to. Why would all of you take life advice from someone who’s only been alive for barely a year more than you? So I thought I might let experts in their field give the advice, and I’ll just be the one interpreting it. Below is a list of a wide range of things that have shaped my senior year, and changed my outlook on life and its complexities. I hope you take some time to experiences my these at my recommendation, I promise you won’t regret any of it.

Writing
Borges. Jorge Louis Borges is possibly the most intelligent writer I’ve ever read. I bought a compendium of his short stories and essays on a whim, and it blew me away. It was one of the few things I actively made time to read at IMSA. His fictions are so real and meticulously crafted, their bizarre nature seems perfectly normal. I wish I could see the world as he did. Go read Labyrinths.

Physics and Beyond. No book has made me more appreciative of learning than this book of conversations recorded by Werner Heisenberg. You don’t realize it, but the stuff we’re learning about every day in class is monumentally cool in the grand scheme of things. Not only that, but the act of learning and being engaged in that process as a community is incredible. Heisenberg grew up taking walks with Einstein and Schrodinger not knowing they’d become the forerunners in their fields. Makes you wonder what all the people you talk to on a daily basis will be famous for in ten years.

“This is Water.” 1507 shows this to the seniors every year on the last night. It’s still the some of the best life advice out there. David Foster Wallace was an incredible mind, go read or listen to this speech. It’ll change you.

“Stufen.” This is my favorite poem. I didn’t read it for the first time this year, but I definitely came to appreciate it much more recently. It’s by the famous German poet Herman Hesse. Here’s a link to the best translation I’ve found.

Music
Tycho. I started listening to Tycho as music to work to. It was chill, smooth, laid back–essentially the perfect study music. Eventually though, a friend of mine remarked about how well produced his music is. I listened to him talk about his process, and he has become one of the figures I respect most in the music world. Something about his background and the way he creates music gives it new meaning.

Chance. Chancellor Bennet is hands down the best musical personality I’ve ever experienced. I briefly saw him live at a festival before I learned to appreciate his music as I do now, and it kills me every time that I had the chance (ahhh get it) to see him and didn’t take it. Apart from his wide range of insightful and positive song topics, his personality makes me beam every time I listen to his work.

Pogo. Pogo is an entirely sample based artist, he’s the first of that kind I’ve ever listened to. That means he records things he hears in films, tv, or music, and resequencing them together to make music. Again, much of his work is ONLY samples. The kind of sounds he creates are incredible. It’s taught me some valuable insights about art, at a time when I was struggling with my own work.

Streetlight Manifesto. How can I not mention Streetlight? I have so much respect for these guys. Their lyrics are catchy and insightful, their melodies are unique and interesting, and their energy is off the charts. If you’re one to prefer softer music, listen to Toh Kay’s renditions of two of their albums with acoustic guitar.

99 Percent Invisible. An honorable mention, because it’s not really music. If you are interested at all in design, architecture, or how humans and the world interact start listening to this podcast right now. I’ve learned so much about the world from Roman Mars’s fantastically smooth voice.

Film
The Salt of the Earth. A film about Sabastiano Salgado, a famous social photographer, this ranges from incredibly tragic and depressing to monumentally inspiring and hopeful. But all of it is brethtakingly beautiful. This tells a story of our world through the eyes of a man, and should be able to put your tiny little life into appropriate perspective.

Human.Okay well we haven’t finished watching this yet but it already gets a spot on the list. This is a documentary about what it means to be human. As you listen to strangers pour their heart out in front of a camera, you can’t help but feel connected. It is the most powerful and moving piece of film I’ve ever seen. Go watch.

Tekkonkinkreet. Call we weeb trash, but this movie is fantastic. You realize so many things about childhood and growing up by watching these two orphans fight for their life. It’s incredibly moving in ways that are hard to describe. It’s one of the movies that once you finish, you just stare at the screen in silence and to be able to take in everything that just happened.

Hayao Miyazaki.You know how I feel about this guy if you took the intersession Andrew and I taught. If you didn’t… just go watch his movies.

Visual
This section is basically me preaching about my future field, but honestly, just google these people’s names. I won’t explain much because I’d just be talking about architecture the entire time, but these people do incredible and inspiring work. I think they’ve all done TED talks as well.

People
Andrew. If I have to give one piece of IMSAdvice, for the love of god get to know your roommate. Your quality of life gets so much better when you’re irrationally comfortable with them. Rooming with this guy has been an experience, and I’m incredibly sad our adventures will at least have to take a break soon.

Parents. Alright, second piece of IMSAdvice, never forget your parents. I realize that some people come to IMSA because they do not have a good home life. If you can say to yourself, yeah, I really like my parents, that means that they are missing you incredibly. Losing a child so early is not the easiest thing. I’ve grown much more appreciative of mine while at IMSA, and am deeply saddened by the lack of time we have together. So don’t waste yours.

Bauer Power. Willy B is one of my oldest and closest friends, and I hope that will remain the case for a long time to come. Moral of the story is, old friends are nice, but constant friends are much, much better.

Ruminations
Health. Being “Healthy” at IMSA is often very hard. But let me tell you why I think it’s important. Believe me, I am not the biggest proponent of sleep. If I have to choose between sleep and almost anything else, sleep will undoubtedly lose. However, there is a balance to be had here. Because while I think it is vitally important to make the most of your time at IMSA, you do actually have to take care of yourself in order to do that. The point at which you are no longer able to make proper use of the opportunities and advantages that IMSA provides you is the point at which you are being irresponsible with your life. You can in fact have the best of both worlds, it’s just a matter of balance.

Making Art. You know, I’ve considered myself a pretty bad artist for a long time now… and yet I’m going into a very artistic field. There’s no way to become good a creative field except for jump in. Any of the first things you do are going to be shameful. And you can choose to hide them and meditate on your process yourself, or show your friends and get valuable critiques. Most importantly though, you just do it.

Community. I honestly believe that community is the single biggest factor in quality of life. The network of people around you can have a profound effect on your entire life. Something I’ve realized being CD among other things is that you have to be active about it. If you want to create a community you need to put in much more effort than you expect to get out, until everyone is following your lead. If you want something done, just take initiative. Recruit people with the right skills if you have to, but every little thing you do will increase the value of contributing to the community if that makes sense. As soon as others believe their contributions make a difference and start to do so of their own accord, you’ve succeeded, and it will inevitably take off.

Long Distance. I don’t know for sure, but I think it’s alright for me to make the claim that I have the happiest long distance relationship at IMSA. Most people react with an “Oh that sucks” when they ask where my girlfriend lives. I usually just shrug. I think distance is not really a bad thing. It’s entirely likely that we wouldn’t have dated for as long as we have been if we were together all the time, things are just more relaxed. It gives us more excuses to travel, and a destination or goal at the end. Distance often makes you value the time you have with the person on the other end of the relationship even more.

It got a bit long, but I hope that this is something you can read selectively now, and revisit later. I ask if you made it to the end, don’t just stop after you’ve read this. You’ve got the combined wealth of information of the entire human race at your fingertips. Look up some of this stuff, you never know where you might end up.

Seniors Speak: How to Add Excitement to a Monotonous Schedule (NOT a step-by-step tutorial)

Seniors Speak: Making the Best of Your Time

Be the first to comment on "Seniors Speak: Some Suggestions"