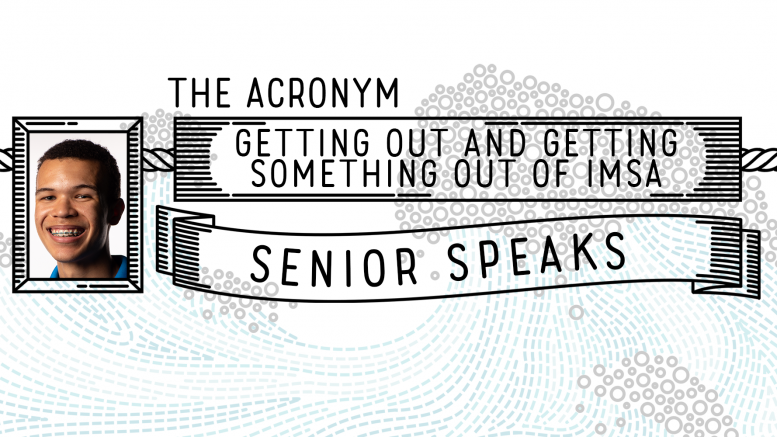 One of the sections included in the annual Senior Edition is a series of essays titled Seniors Speak. These works are written and submitted to The Acronym by members of the graduating class, allowing them to reflect on their experiences, share advice, and advocate for change. The writer of this piece is Jake Cooley (United States Air Force Academy ’22), who lived in 1505A sophomore year and then 1505D for the rest. While not occupied with being the Frost King or doing the Shruti Dance, he was heavily involved with ISP and Habitat for Humanity.

As IMSA students, sometimes we focus too much on getting out of this place and forget about taking away something truly special from the place where we’ve chosen to live, love, and cry, challenging ourselves for three of the most important years of our lives. In all honesty, most of us came to IMSA as a means to get into a good college somewhere and then live a life worth remembering. For some people that means focusing on class, getting the grades, and cherry picking one or two clubs to fill up that section on the Common App. For some people, that’s a totally viable option and the best to them, but taking that path, in my opinion, makes coming to IMSA a waste. It’s a path that can lead to a dashed effort of trying to do everything you missed out on during second semester senior year and leave you full of regrets. So, I suggest a different approach to IMSA so that you can leave with something you’ll hold on to for the rest of your life.

Let me tell you about the very first event I did for a little club called IMSA Student Productions. It was my sophomore year and I was doing video coverage on the AASA (now known as BSU) fashion shoot. Since I had to film a bunch of people I had never met and then try to make a video out of it, I was just a tad bit nervous. Mind you I had just been trained in how to use a video camera that morning. At the event, most people just walked right past me and most of my footage was of people awkwardly wondering why a camera was being shoved in their face. Then, I was offered some Kevin-ly advice to smile and wave at the people to get better footage. Still being the media noob I was, I took this literally and posed like what would probably be the creepy character you see in a horror movie right before the jump scare. Let’s just say that didn’t make people any more willing to smile for the camera. My footage never saw the light of day, so I assume it was probably pretty bad; but that’s not the point of the story. The point is that I tried something I was curious about. Even if that event scared me away from ISP for the next year, I did come back, and ISP became one the best parts of my IMSA career. The experience opened my eyes to try more things, get more adventurous, and be willing to get out of my comfort zone.

I’ve talked to countless people at IMSA who contemplate doing dances for culture shows, participating in Clash, and joining a club they’ve always been interested in, but never had the courage to try. Choosing to do so or not is what separates getting something out of IMSA and just coasting through this place for three years to grab a diploma at the end. Don’t get me wrong, being adventurous isn’t always sunshine and rainbows. There have been dances, clubs, and opportunities I’ve tried that gave me a metaphorical slap on the hand and made me rethink everything I was getting myself into. However, failure gives you a gift to take with you after IMSA too. By the end of sophomore year I had been rejected from 5 of the 6 programs I applied to, and from those experiences, I took a long look at the person I was and tried to improve myself. Fast forward to the end junior year and I had received 5 out of the 5 programs I applied for, which I can give failure a lot of credit for.

Of course, I might have been an exception, but I think it’s unlikely. A fresh example in my mind is from a recent dinner conversation with Kir Nagaitsev. We were talking about Clash drill, something he’d never done before, and he said that he “wished he had done it for the past two years.” The statement was bittersweet, because although he enjoyed Clash, it was disheartening to me knowing that he wouldn’t get to do something like that again. Think about it, how often do you think you’ll get the opportunity to participate in a choreographed dance in an environment like Clash ever again? For most of us, probably never. So I encourage you to do as much of the crazy stuff IMSA has to offer before that option avoided becomes an opportunity missed.

To end, I’ll share some valuable information I got out of IMSA from my time on ISP and is the reason I love it so much. One of the biggest projects I ran was the senior (and eventually junior and sophomore) portraits last fall. What I got out of the project was how to make people who don’t feel like their beautiful change their mind. So although I didn’t know I was getting myself into over a month of missed meals and countless 9 hour photoshoot days, I wouldn’t go back and change a thing. From the right angle and with good timing, everyone lets their inner beauty out for the world to see, and the camera’s there to capture it forever. So I encourage you all not to be afraid to take a risk, fail a little bit, and show the world the beauty that makes you, you. Hopefully then, you’ll leave this place with something much more than the slip of paper that recognizes you made it through.

Be the first to comment on "Seniors Speak: Getting Out and Getting Something Out of IMSA"