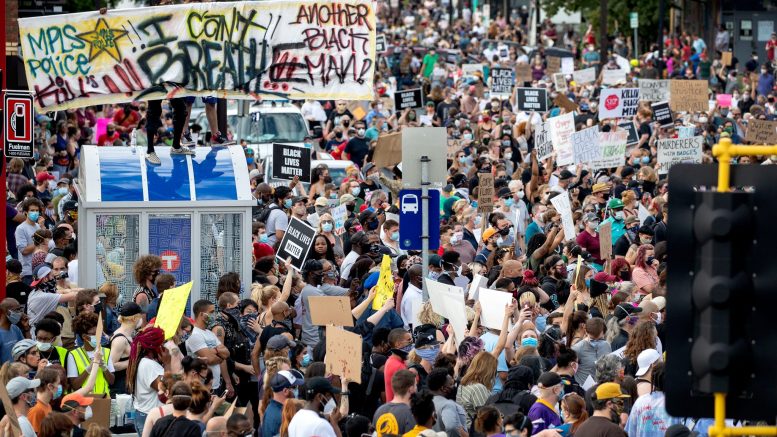 George Floyd, a 46-year-old African-American man, was arrested, then died later in the hospital on Monday, May 25 in Minneapolis, Minnesota. But what transpired between the initial arrest and the subsequent trip to the hospital is the reason for days of riots and national unrest.

Police reported that Floyd had been “resisting arrest.”Officer Derek Chauvin (since dismissed from the police department) then proceeded to kneel on Floyd’s neck as a restraint, pressing him against the ground as the man shouted repeatedly, “I can’t breathe.” Floyd eventually lost consciousness and was transported to a nearby hospital where he was pronounced dead. The three other officers on the scene made no move to stop Chauvin.

This is not the first time a police officer has hidden behind their badge, refusing to bear the consequences of killing an innocent black person. Several videos taken by witnesses from the moment Floyd was handcuffed and walked to the side of the police car, until the last moment Chauvin kneeled on his neck, show no evidence that Floyd offered resistance. Even after being Floyd had been handcuffed and pressed to the ground, Chauvin decided to force an unnecessary neck-restraint on Floyd for a full eight minutes.

Floyd’s death has sparked riots in Minneapolis for the past three days, including the looting of a Target store and street protests, demonstrators carrying signs reading “I Can’t Breathe,” “No Justice No Peace,” and “#BlackLivesMatter.” Protests have escalated to the point that tear gas has been deployed to deter the demonstrators, while Chauvin’s house has been barricaded by police officers to protect it from rioters. The four police officers involved in the incident were fired on Tuesday and have been taken into custody while the Minneapolis Police Department are conducting an internal investigation. Chauvin himself has been charged with third degree murder and manslaughter.

Given these charges and dismissals, what then is the problem? Historically, even if charged for it, white police officers have an extremely low probability of being convicted with murder for murdering African-Americans, yet black people are incarcerated at five times the rate at which white people are. Those who don’t believe in white privilege must consider the centuries-long oppression African-Americans have had to face, leading to the racially disproportionate mass incarceration and deaths of black people in this country. So while it may sound promising that the officers have been fired, taken into custody, and that the “incident” is being investigated, it’s highly likely that they will receive a less severe sentence than they deserve.

In fact, Derek Chauvin has a history of police brutality, and he was never convicted for his previous actions, walking around freely to eventually kill George Floyd. In 2008, Derek Chauvin shot an unarmed, 21-year-old African-American man named Ira Toles. In 2011, he was put on leave for shooting an Alaskan Native American, Leroy Martinez. Different news articles report between 10 to 18 police brutality complaints in the Minneapolis Office of Police Conduct complaint database against Chauvin, all listed as closed. Now, will someone explain to me why this man was allowed to walk around freely up until today?

Derek Chauvin’s actions are nothing other than cold-blooded murder of George Floyd, a man who was known among family and friends as a “gentle giant.” Yet Chauvin has been charged with third-degree manslaughter.

Police brutality has been a long-standing problem. Racism and the oppression of African-Americans has existed even longer.

There are countless cases of innocent lives taken away for the simple reason of being black. Ahmaud Arbery was shot dead from a car while jogging in his neighborhood. Teenager Trayvon Martin was shot dead after going to the store and buying Skittles and iced tea. Breonna Taylor was shot dead while sleeping in her own apartment. For these reasons, African-American children, men, and women must grow up fearing for their lives, afraid of the people that are supposed to protect them.

Remaining silent is no longer an option, unless we want to just wait for more innocent lives to be lost. #BlackLivesMatter is not a “temporary movement” that only re-surges every time another person is killed. We must persist until we see change, for the sake of George Floyd and all those before him.

A Response to “On Hate Crimes and Hoaxes”

The Chauvin Trial: Verdict, Implications, and What’s Next