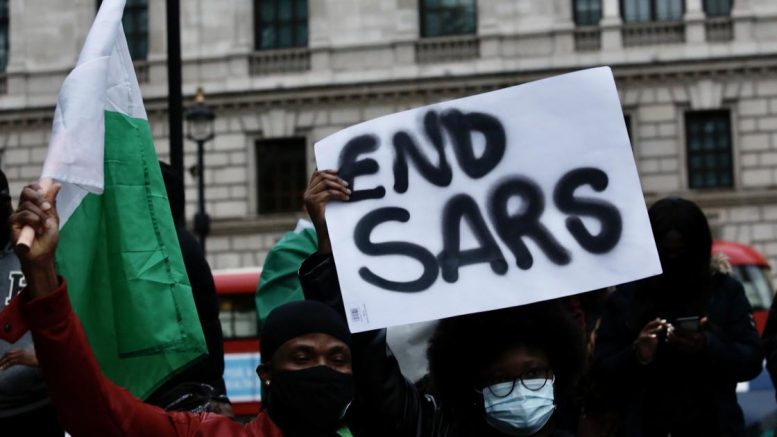 In early October, many Nigerians began protesting against the Special Anti-Robbery Squad (SARS). SARS is a heavily armed police unit formed in 1992 to fight violent crimes. The squad has been accused of unlawful arrests, rape, torture, theft, and extrajudicial killings. The protest stemmed from a viral video of a SARS officer allegedly shooting a young man. The man who filmed the video was arrested, which provoked additional anger.

Thousands of Nigerians, particularly youth, have since taken to the streets to protest. Within the first week of protests, 15 people, including two police officers, were killed. A curfew was issued in Lagos, Nigeria’s largest city, about a week after the protests began. A group of protesters broke curfew in Lagos and officers opened fire. Approximately 25 people were injured in this incident, and it is unclear as to whether there were zero, one, or twelve deaths in Lagos that night.

The government’s response to the protests was to dissolve SARS. However, the government has promised this four times before. Another issue with this promise is that the SARS officers would not be fired, but rather dispersed to other police units. Additionally, the Special Weapons and Tactics (SWAT) team, which is also known to be a violent organization, would still exist. Even if the promise to dissolve SARS is kept, the police brutality in Nigeria will still continue.

In response to the announcement to dissolve SARS, protesters made a list of five demands for the government, as shown below. 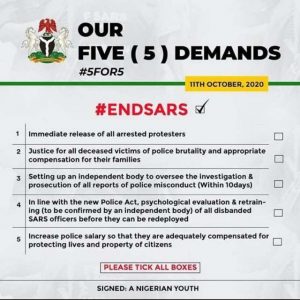 The #EndSARS movement has become a worldwide issue. Protests have begun spreading around the globe in places like the United States, England, Japan, Germany, and more. The hashtag #EndSARS has also spread throughout social media.

So what can you do to help? Congratulations, you’ve just taken the first step to helping by informing yourself! Continue to read articles and watch videos so that you can stay informed. You can also help to inform others by reposting accurate information you see on social media and using #EndSARS. You could donate to organizations that are providing food, water, masks, legal services, security, and medical aid to protestors. Such organizations include Diasporans Against SARS, Assata’s Daughters, and #EndSARS Relief. Do your part to help end police brutality around the world.