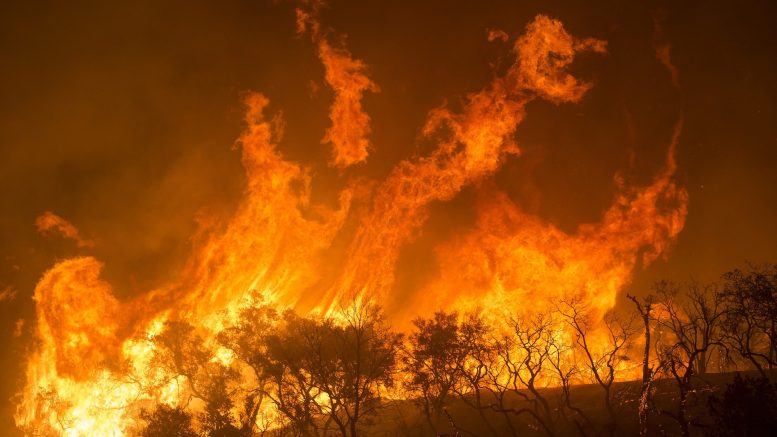 Since August, dozens of wildfires have set California, Oregon, and other areas in the western U.S. ablaze. Towns have been devastated and blanketed with thick smoke, tens of thousands of people have been displaced from their homes, and over thirty people have lost their lives.

What is causing the fires?

Dry lightning strikes in early August sparked many of the blazes. NASA reports that a “perfect storm of meteorological factors” are contributing to this period of “extreme burning”. A combination of high temperatures, unusually dry air conditions, and fierce winds have accelerated these high-intensity, long-lasting fires.

Who is most affected?

Oregon, Washington, and California are experiencing the highest number of breakouts. These three states alone account for over five million acres of the 6.7 million acres that have been scorched in the U.S. this year. The largest fire in California, the August Complex Fire, began on 16 August as thirty-eight separate fires. The largest four fires had merged together by the end of August. As of September 17th, the August Complex fire has burned over 830,000 acres of land. In Oregon, the Almeda fire has been wreaking havoc since it began in the city of Ashland on September 8. According to a fire-service spokesman, 42,000 people in the area have been affected.

How are people affected?

As a result of the fires, affordable housing, apartment blocks, and commercial districts have burned to the ground, displacing thousands of residents. Additionally, global air quality rankings report that Oregon, Washington, and California are currently experiencing some of the unhealthiest air anywhere in the world. 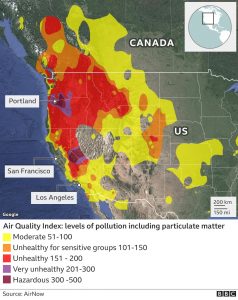 Several areas in Portland and San Fransisco have hit levels of pollution that meet or exceed hazardous levels. Currently, airborne smoke and ash particles concentrations in the impacted states are high enough that sunlight’s shorter wavelength colors (blue and green) are being blocked while colors with longer wavelengths (red and orange) are able to pass through, causing the sky to take on an apocalyptic red hue.

What does this mean for the future?

According to climate scientist Daniel Swain, the driving force behind the fires this year is the rising air temperature. This year, many western states had their hottest summers on record. The average temperature across the U.S. was 2.6 degrees Fahrenheit above the 20th-century average. Higher temperatures paired with dry land create terrain that is vulnerable to wildfire outbreaks. Global warming has affected the behavior of water stored in vegetation across the U.S., resulting in a rise in the vapor pressure deficit across the nation. The land is now drier and the temperature is higher, meaning that a small ignition has more potential to swell into a large fire, much like those that are currently erupting on the west coast.