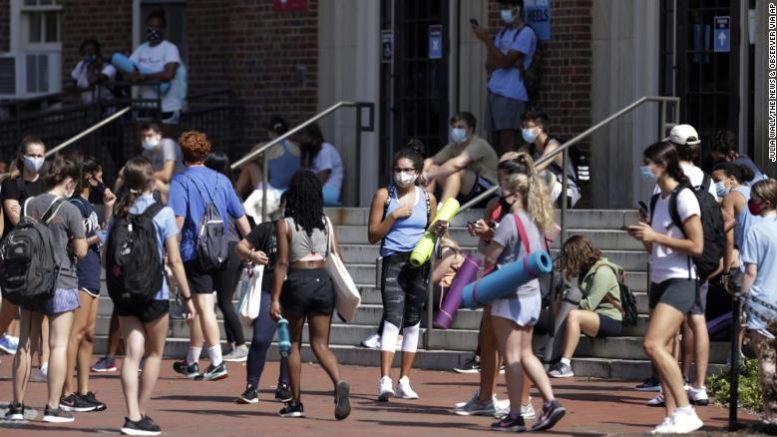 From coast to coast, all 50 states in the US are scrambling to contain coronavirus rates on their college campuses. Many parents, students, and college faculty have previously voiced their concerns regarding returns to in-person interactions and classes. While many schools require their students to complete a mandatory quarantine when arriving, along with compulsory testing frequently, coronavirus cases at many institutions have surged.

As colleges are becoming one of the next hot spots for virus transmissions, a few schools have tried to open their doors, only to close them again anywhere from 3 weeks to 2 months after reopening. The University of North Carolina at Chapel Hill is one example where students were urged to leave campus after arriving for only two weeks. After shifting to all online classes, the administration revealed that between August 10 and August 16, out of the 954 students tested, 130 returned positive. This resulted in a positivity rate increase from 2.8 percent to 13.7 percent. Recently another school that sent their students home due to rising rates is The University of Texas at Austin. The institution reported 312 new cases just on the first day of classes, and since then, they have increased to 630. UT Austin alone has contributed to 28.7% of the new cases in Austin-Travis County. Another important closure to mention is James Madison University. Over 400 cases were reported in less than a week of school. The president of JMU announced plans to send most students home and conduct online classes.

Although many schools have closed their doors, others are continuing in-person classes or have plans set to go back in-person when possible. Two of the biggest outbreaks have occurred in Iowa, where both Iowa State University and the University of Iowa are located. In just two weeks of classes, Iowa State announced a 28.8 positivity rate among those on campus, and the University of Iowa reported about 1000 positive cases. However, they have yet to close their doors. Instead, they are continuing in-person classes for classes with 50 students or less. Auburn University is also among one of the largest university outbreaks thus far. Over 500 students have tested positive while living on campus; however, the university’s medical director is not concerned with these rising cases.

Colleges have started to research the causes of these rapid transmissions. The biggest concern they discovered was the mass number of positive cases traced back to off-campus parties at sororities and fraternity houses. A video was leaked showing students in a crowded party without masks or social distancing in Oklahoma. These gatherings are not just taking place in Oklahoma, but all over the United States as well. The University of Alabama, Arizona State University, and The University of Florida are only a few among many other schools shown to be dominating the party scene while battling a global pandemic. As the numbers now prove, these parties are a leading cause of outbreaks in universities.

Even with certain schools taking as much precaution as possible, the coronavirus is still spreading through college campuses at an unprecedented rate, which poses the question: is it worth reopening at all? As more data rolls in and more colleges and universities mount their responses, only time will tell.

This is For the Rejects

5 Ways to Spend Your Time During the Quarantine

Be the first to comment on "College Coronavirus Outbreaks"