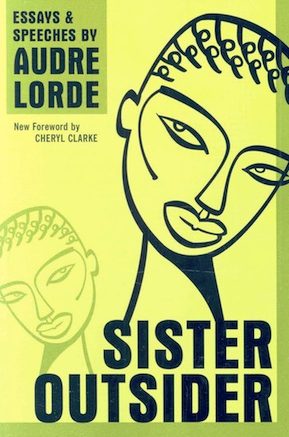 “The white fathers told us: I think therefore I am. The Black mother within each of us – the poet- whispers in our dreams: I feel, therefore I can be free.”

Sister Outsider is a collection of Audre Lorde’s writings — essays, poems, and even an interview. Through its intimate recollections of a Black lesbian poet, activist, and mother from the 20th century, Sister Outsider articulates many oppressions in the United States in an introspective light. But why should you wiggle your snow boots on and take a trip to your library to pick this book up?

Lorde argues poetry is the solution to miscommunication because poetry transcends literal verbal communication to deliver deeper messages. Sister Outsider includes an essay titled, “Poetry is not a Luxury.” Here, Lorde argues poetry ought to be an integral part of everyday life. As a child of an immigrant, Lorde understood non-verbal communication is valuable because her mother wasn’t always able to articulate herself through English. Lorde noticed, however, many people with fluent abilities in English still struggle to translate an idea inside them because they aren’t accounting for their feelings. Poetry, Lorde argues, can solve these struggles because “it is through poetry that we give name to those ideas which are — until the poem — nameless and formless, about to be birthed, but already felt… we can train ourselves to respect our feelings and to transpose them into a language so they can be shared.”

Audre Lorde’s 20th-century perspective details the Black and queer experience in the United States with poignant intimacy. Although Lorde compiled Sister Outsider back in 1984, Lorde’s work remains relevant, so Sister Outsider can act as an introduction to understanding Blackness in the United States in a different light. Sister Outsider includes pieces such as “Man Child: A Black Lesbian Feminist’s Response,” which depicts the particular struggles Lorde faced as a Black lesbian mother of a boy and raises questions that regard sexuality and race through her truth off her experience. Pieces like “Man Child” can act as an introduction because this writing is clear and not written in poetry. Once familiar with Audre Lorde, reading poetry pieces such as “Power” that illustrate how she felt after a shooting and situations similar to the ones we still see in the United States can be the next step to understanding Blackness in the United States.

Audre Lorde is a powerful woman. She survived cancer and took on the challenges of being a child of an immigrant, a lesbian Black mother from the 20th century, a poet, and an activist. Her words are moving and ask her readers to reflect upon their methods of thinking, so reading Sister Outsider is a perfect introduction to valuing her life and understanding her oppression, which is why everyone ought to read this book.

Be the first to comment on "Sister Outsider: A Collection for Everyone"