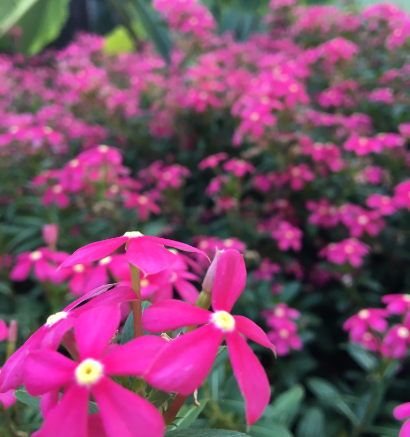 An image of a small garden, with the focus on three purple flowers. Source: Julia Simmons.

In November 2016, I first discovered the online publication, Winter Tangerine. The site was hosting an affordable workshop for femme writers about the feminine, and I was lucky enough to be accepted into it. What followed was a week of intense dedication to writing. I was placed in a small group within which I was given feedback on every piece I produced, though the entire workshop was composed of around 50 people. We competed in a few word wars, were able to then comment on each other’s work in a Facebook group, and were fortunate to be a part of guest lectures by talented poets. For example, Chrysanthemum Tran, a trans woman of color and activist, assigned us a few readings — both poetry and prose — and then we discussed them in a Google Hangouts session as a workshop.

This experience is one of the finer things about Winter Tangerine. The community I found in this online workshop is unequaled by anything I’ve ever experienced before. I was able to work with people years my junior, as well as people twice my age. There were people from opposite ends of the globe, and we were all able to share our experiences, in this case, with the feminine. The people at Winter Tangerine are unquestionably some of the most competent, talented individuals, and they remain my inspiration to this day.

The workshops are not the only thing that make this publication great, though if you are capable and interested, I highly recommend you apply. (You can find some upcoming opportunities at the end of this review.) As a whole, Winter Tangerine is a platform for people of color, the LGBT community, and everyone at the intersections. It was founded by Yasmin Belkhyr when she was a teenager in an effort to provide a space to write about things that didn’t fit into the predominantly white, male world of online poetry publications. What you find, then, at Winter Tangerine is unapologetic – for everything it is, and everything it isn’t.

Besides workshops, you will find on the website various series and columns. They have a “five minutes with” series, a digestible and insightful series of interviews with creative minds. They have, on a rotational basis, various series open for submissions, such as their “We Make America Great” series which is to be released very soon. Each series is packed full of powerful art that aims to “amplify the unheard.”

Winter Tangerine is unique, and anyone who has any interest in poetry – and maybe especially those who don’t –  should make Winter Tangerine part of their daily publications.

“Beyond the Breadcrumbs” Spitfire Series is now accepting submissions.

“Open By Riot Laughter” Workshop for trans and gender non-conforming writers is open for applications.

Also, take a look at the Winter Tangerine Fellowship.

Julia is a senior who likes her dogs, pretending to be productive, and, occasionally, her quad.

Sister Outsider: A Collection for Everyone

Be the first to comment on "Winter Tangerine: On Poetry, Prose, and Protest"