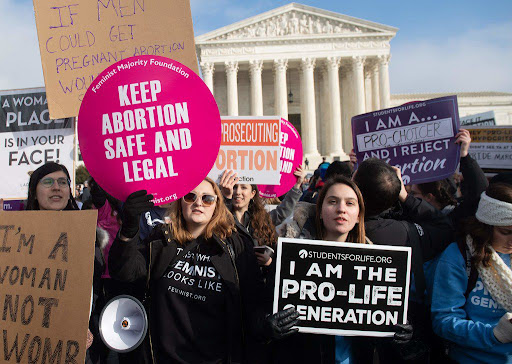 Abortion supporters hold signs in protest next to abortion opponents during "March for Life," an annual event that marks the anniversary of Roe v. Wade. Credit: Saul Loeb

A new law that bans abortions from six weeks after a patient’s last menstrual period recently went into effect in Texas. This limit is well before many women even know they are pregnant.

“When you factor in the time it takes to confirm a pregnancy, consider your options and make a decision, schedule an appointment and comply with all the restrictions politicians have already put in place for patients and providers, a six-week ban essentially bans abortion outright,” Dyana Limon-Mercado, executive director of Planned Parenthood Texas Votes, the political arm of Planned Parenthood affiliates in Texas, said.

Under (Sec 171.207.) Limitations on Public Enforcement, the law only allows its enforcement by private individuals; the state and any other political subdivisions are prevented from enforcing or attempting to enforce the law. This is a legal maneuver designed to withstand a court challenge on the law’s constitutionality, which played out the day the act was passed.

On September 1st, 2021, the Supreme Court referred to the Limitations on Public Enforcement section in its decision to reject an emergency request to block the law. This section allows any civilian to sue abortion providers or others, even if no constitutional rights of patients were violated.

Under (Sec.171.208.) Civil Liability for Violation or Aiding or Abetting Violation, the law also states that patients cannot be sued, only those who perform or aid in the abortion can be. This includes a patient’s doctors, drivers, therapists, any family or friends that helped pay for the procedure, and many more.

This is a disadvantage that benefits plaintiffs. It drags out the process of court for defendants if they keep having to come back to court over one abortion. It also means that the defendant would have to pay for the expenses of each case, regardless of whether they win or not.

Sec. 171.208 also says that the state will award $10,000 to a plaintiff if they win their case. Usually, there is language written into the law that describes the relief needed by the plaintiff for the harm done against them. However, since the plaintiffs are not directly involved in or harmed by the abortion being performed, no relief for harm is included.

Instead, the court will award $10,000 and any costs or attorney’s fees to the plaintiff, including a deterrent that the court finds acceptable to prevent future misconduct, such as fining the defendant in the case of any future violations of the law. Even though the plaintiff will get a minimum of $10,000 if they win the case, the law bars the court from awarding costs or attorney’s fees back to the defendant even if they won. This is a clear ploy to try to get civilians to sue abortion providers and others.

Sec. 171.208 also protects serial plaintiffs. It states that if one plaintiff were to bring hundreds of lawsuits against different clinics all with the same allegations and the plaintiff loses the first case, the other providers being sued over the same charge by the same plaintiff cannot rely on that first case to stop the litigation. This protection is known as “nonmutual issue” or “claim preclusion,” and it takes away a potential defense for defendants. “Every case is a new beginning under this statute,” David Coale, an appellate lawyer in Texas, explained.

Rapists cannot sue under Sec. 171.208. It says that if the patient was raped, sexually assaulted, or a victim of incest, then the perpetrator cannot sue over the abortion performed. However, it does not prevent other people from suing over that particular abortion, even if the pregnancy occurred as a result of rape, sexual assault, or incest.

There’s also the loophole of legal vs. illegal sex. If the sex was legal and resulted in an unwanted pregnancy which led to a woman getting an abortion, the person who impregnated the patient can sue. For example, an angry ex would be able to sue. This also means, however, that any rapist who was not convicted can also sue a provider for providing an abortion to a woman they raped.

While this is a try at keeping legal challenges narrow, legal experts said that attempting to bar the defense from making an argument against the law being unconstitutional will likely be difficult to enforce.

Just like Sec. 171.208, Sec 171.209 Civil Liability: Undue Burden Defense limits the arguments that can be used in court. It seeks to limit defendants from using Roe v. Wade as a defense. The defendant cannot claim that the patient’s right to an abortion is a defense from performing one unless the Supreme Court determines otherwise.

Even though the Texas Heartbeat Act is a major step back for women in Texas, Texas Right to Life called the bill’s signing a “landmark victory,” but said they are waiting for a more comprehensive measure.

Be the first to comment on "The Texas Heartbeat Act"