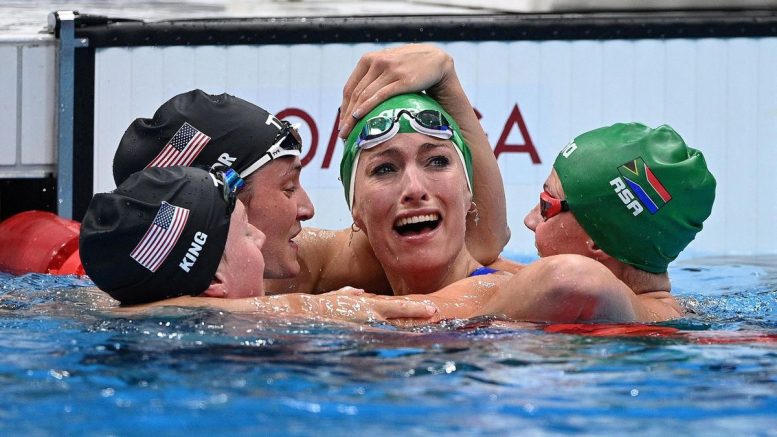 During the Olympics, Tatjana Schoenmaker of South Africa was congratulated by an RSA teammate and the Team USA athletes who won silver and bronze after Schoenmaker broke the world record for women’s 200m breaststroke and won gold | Source: Eurosport

This summer, the world briefly saw a light at the end of the tunnel of the COVID-19 pandemic, with decreasing case rates and higher rates of vaccination up until around the Fourth of July. While the pandemic has been in the limelight, many other events have occurred in the shadows. Some affairs have been dark and grim, while others point towards a brighter future for the world.

The shadows of the summer include the losses of many due to a surge in drug overdoses, terrorism, and natural disasters. The ongoing wildfires in Oregon and southern Washington, resulting from dry conditions and record heats in June, have necessitated evacuations and killed one firefighter as of the time this article was written. Also, the Florida condominium building collapse on June 24 killed nearly 100 people and resulted in countless injuries. In the middle of the night, the Miami-area condo abruptly collapsed, trapping residents under 14,000 tons of rubble. Now, there is evidence that the building collapsed due to an infrastructure problem. A 2018 engineering report on the building uncovered significant structural damages, most notably highlighting cracked concrete due to failed waterproofing. However, the concerns were ignored, no repairs were made, and this tragedy subsequently occurred.

Dark times were faced not only by the U.S. but also the entire world. On August 15, Afghanistan was taken over by the Taliban and the U.S. pulled out of its 20-year war. The Afghan president quickly departed and mass evacuation efforts began immediately.  The U.S. evacuated over 122,000 people, including all soldiers, by the end of August as promised. International airports have also been flooded with thousands of Afghans trying to escape, thus packing the Kabul International Airport and creating a major target for extremists. As of the time this article was written, several dozen Afghans and 13 U.S. troop members have been killed at the Kabul airport. 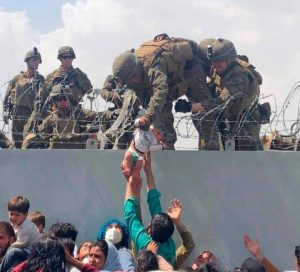 Amid the chaos of Afghans trying to flee the country, a baby was seen being lifted up to safety with U.S. soldiers | Source: USA Today

Another area that has faced dark times this summer is Haiti, from the assassination of President Jovenel Moïse on July 7 to the magnitude 7.2 earthquake on August 16. In the earthquake, at least 2,200 died, 12,200 were injured, and hundreds are still missing. Those who did survive faced many challenges afterwards, including wrecked homes, food instability, and severed electricity. The day after the earthquake, Tropical Storm Grace passed through the island, causing flooding and landslides. Rescue efforts were hindered, and those who just lost their homes were fully exposed to the elements. In light of the natural disasters, assassination of the president, the political unrest, a new leader, and raising crime rates, Haiti is facing a true crisis.

While certain events have been dark, others have cast light on a better future. Over the summer, research on a 146,000 year-old fossilized skull was brought to light. The fossil marks a newly identified species, Homo longi, or “Dragon Man”, named after the Black Dragon River region of China where the skull was found. The fossil had not seen the light of day since 1933 when Japan occupied China. Chinese laborers hid the skull to prevent it from reaching the hands of the Japanese. Just before his death in 2018, one of the Chinese workers told his grandson where the skull was hidden. Since then, the skull has been analyzed and results were released over the summer. Scientists have identified the fossil as a closer relative to modern humans than Neanderthals, helping develop a better understanding  of human evolution and advance science.

Race relations were also under the light this summer. In May, 215 Indigenous children’s bodies were found in an unmarked grave in southern British Columbia. These children were identified as students at a residential school that operated from 1890 to 1969. The school’s goal was to assimilate the indigenous populations and erase their culture and language from Canadian society. According to survivors, these schools were commonly abusive and traumatizing to students. Following the discovery, many people demanded searches for other graves. Today, the number of bodies found totals over 1,100. While grim, this discovery helped raise awareness for Canadian Indigenous populations, as well as bring communities together. The discovery cast a shadow onto July 1, which is Canada Day. Traditional celebrations on this holiday were cancelled to honor all of those who were lost and bridge the gap between Indigenous and other populations of Canada. Related to national celebrations, on June 19th, President Biden declared Juneteenth a federal holiday, promoting equality and honoring an important day in African American history. Further advancing justice, Derek Chauvin, the man found guilty of murdering Geroge Floyd, was sentenced for 22.5 years. Additionally, the first black champion of the Scripps National Spelling Bee, Zaila Avant-garde, represented a step toward equal opportunities.

Another highlight of the summer was the Tokyo 2020 Summer Olympics, which was unlike any other games before. While the pandemic has forced people apart, the Olympics demonstrated a great sense of community. On Team USA, the women’s gymnastics team supported Simone Biles as she took a leave of absence for mental health reasons. In the women’s 200m breaststroke final, Tatjana Schoenmaker of South Africa broke the world record and won gold. In shock, Schoenmaker was congratulated by a teammate and the silver and bronze placing medalists from the U.S.

Additionally, many athletes made history. Carissa Moore won Hawaii’s first gold medal in surfing, and Allyson Felix became the most decorated track & field athlete from the U.S. Also in track & field, India’s Neeraj Chopra won the first ever track & field medal for his country with his performance in javelin. Unlike ever before, two athletes opted to share gold for their event. Qatar’s Mutaz Barshim and Italy’s Gianmarco Tambe faced off in a dramatic high jump final, where the bar was raised to an Olympic record of 2.39m. Neither athlete felt like he could clear the jump successfully, so they elected to be co-champions. Overall, the camaraderie displayed at the Olympics brought hope to people around the world.

There was also good news for environmental sustainability advocates. The Intergovernmental Panel on Climate Change (IPCC), a subsidiary of the United Nations (UN), released their AR6 Assessment Report regarding climate change. The document casts a grim light on the future, avoiding best-case scenarios like most other climate reports. The recent wildfires in California, deadly floods in China and Europe, and record temperatures in Siberia are likely results of human damage to the atmosphere, according to the report. Ultimately, the report shows that the damage humanity has done to the planet is irreversible within the current generation’s lifetimes. However, the report takes a significant step towards a better future for the planet by providing the most updated research for decision-makers. Also trying to combat climate change, the European Union (EU) announced their plan to become carbon neutral by 2050. The plan involves highly taxing jet fuel and banning the sales of diesel or petrol cars. The EU’s plan has received some critiques; critics claim that the plans would likely cause economical issues due to changes in car manufacturers, airlines, the coal industry, household heating bills, and much more. While these challenges may be difficult initially, hopefully they will brighten the future of the planet in the long run.

Another controversial topic, abortion rights, shifted recently in Texas. On September 1, the Supreme Court passed Texas’ law to ban most abortions with a 5-4 vote. Texas medical professionals are now prohibited from conducting abortions after cardiac activity is detected, which usually occurs around six weeks after conception. The Supreme Court has blocked similar laws in the past, but Texas’ law passed because of one significant difference. Instead of having criminal prosecutors enforce the law, it is up to private citizens to report illegal abortions. Any Texas citizen now has the right to sue abortion providers or anyone who aids the woman in getting an abortion. If the law suit prevails in court, the litigant is entitled to up to $10,000, whether or not they have a connection to the woman who got the abortion. Concerns about this most restrictive abortion law to date include that there are no exceptions for pregnancies caused by rape or incest (although there are exceptions for medical emergencies) and greater effects for women of color and low income. Some women do not realize they are pregnant by the sixth week, so nearly 85% of abortions in Texas will now be prohibited. Additionally, some argue that the law violates the constitutional right established by Roe v. Wade. Since the law was put into effect in September, medical clinics in neighboring states have seen a surge of Texan women seeking abortions. Now, other state’s governors, particularly Republicans, have said they are thinking about following Texas’ suit. Mississippi has a proposal to prohibit abortions after week 15 that is scheduled to see the higher court later this year. Whether or not Texas’ new law is effectual, it will forever change debates and policies surrounding abortion rights.

Finally, hopeful political shifts represent the potential for a brighter future; a shining light at the end of a grim tunnel. Israel’s new prime minister, Naftali Bennett, has already begun working on a better relationship with the U.S.

The Hard Truth About Your New School

The Dangers of Overcommitting

Be the first to comment on "Shedding Light on Summer 2021: A News Recap"