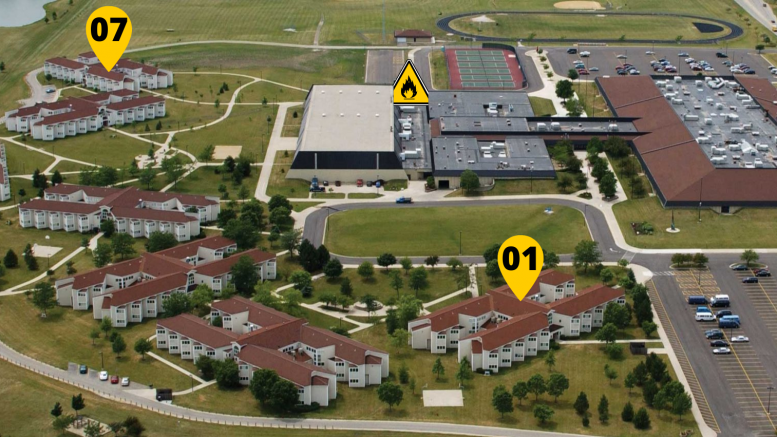 Aerial view of IMSA | Smoke alarms were activated at door six and students were told to evacuate to halls 01 and 07.

On Friday, November 19, at 9:29 A.M., smoke emerging from the southeast area of the main building near the mailroom triggered the school’s fire alarms. All personnel in the main buildings were evacuated immediately and instructed to enter the nearest residence halls, as it was nearing 40°F outside. Despite previously practicing the fire drill, the evacuation was not nearly as organized as it should have been.

Students were instructed to pile into either the 07 or 01 residence hall commons, both of which quickly became cramped, not allowing for proper social distancing. Additionally, faculty and staff were not given proper spaces to shield themselves from the cold. As not all residence halls were open to evacuees, the spaces quickly became cramped, leaving leftover students and faculty to their own devices. Much later, students were told to return to their own halls.

There was a lack of proper communication in this case, with students, faculty, and staff alike being left in the dark about what the next steps were. After around twenty minutes, students were instructed to go to their own residence halls “until further notice.”

“I was a little annoyed if I’m being honest,” says student Ashley Hernandez. “There were no clear directions as to where to go.” Many students also had qualms about unclear instructions for students not attending class, such as Giada Avina, who was caught off guard while enjoying an off mod.

“They prepare us for when we are in the main building, but what about the people who are in their dorms? They don’t specify what to do except ‘stand here.’ It’s not helpful.” Others, including Avina, would have preferred students were allowed to walk directly to their dormitories, avoiding overcrowding and panic.

Later at 10:01 A.M., an announcement was made instructing all students to return to the main building and continue with classes, despite smoke still being heavily prevalent near Door 6.

“When I got back to the part of the building that triggered the fire alarm, the room was still smoky and I was worried for my safety,” explained Sabriya Attia. “Yeah, it was unsafe that they made us go back while it still smelled burnt,” Hernandez added.

Had a clear-cut procedure been addressed and followed during the fire drill proceeding, confusion could have been avoided. However, previous fire drills have also had some major issues. On October 18, an unannounced fire drill took place, devoid of any previous mention of such an event. To make matters worse, a LiveSafe announcement was not made to identify the event as a fire drill until 5 minutes after evacuation.

IMSA Administration, we as the IMSA student body ask that communication becomes top priority when addressing drills of any kind. We ask that all future drills have preceding announcements and clear-cut drill architectures laid out so that students may have information to review prior to the drill event. Though it is well understood that student safety is valued by Administration, we would like this value to be exemplified through actions taken to improve communication and safety of students, faculty, and staff alike.