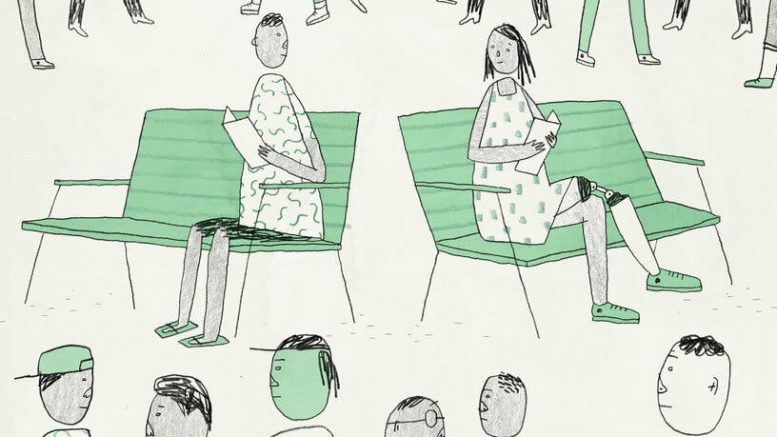 Visibility is not a metric of disability | Source: Brian Rea, New York Times

“I sometimes spent nights just thinking about my disability. I feel silenced, shuttered, disregarded. I never felt this anxiety and depression online. Things are different now.”

Quietly but with bold passion, an anonymous high school student, who will now be referenced as Tristian, began sharing his story. Sixteen-year-old Tristian was diagnosed with autism spectrum disorder when he was just four. Ever since, he has learned how to appreciate, cherish, and openly celebrate his disabled identity, even amidst the challenges he encounters in the classroom with sensory overload and distractions. Over the pandemic, though, there was no in-person schooling for him to confront these challenges — sensory overload, distractions, and other triggers were minimized.

“Virtually, no one could make fun of my disability. In virtual classes, you could not tell that I had autism. I just moved and switched schools. I had a fresh start. I felt, after a long time, that my disabled identity was not impeding my social interactions.”

But Tristian’s experiences quickly took a turn as his school reopened this semester. From the first day of school, Tristian felt uncomfortable and silenced.

“I felt so uneasy. I went into the Academic Support and Accommodations office and it felt like an interrogation. The coordinator of the accommodation plans asked me at least twenty questions about my disability and at one point, it felt like she was making assumptions about what I felt with my disability. The entire process should have been simple, but it wasn’t. She handed me five forms, told me to contact my physician and parents, have a meeting with all my teachers, and so much more. I was stressed, scared, and confused to say the least.”

Tristian, however, still went through the entire process. He worked with his parents and physician to complete and submit all the documents. He attended a meeting with every single one of his teachers where he had to publicly share details about his disability that he was not comfortable sharing. He regularly communicated with the coordinator to ask and answer questions. And then he waited: a couple hours, days, and even weeks until almost thirty days after he submitted the form, he got an email back. His accommodation was accepted and he would be given some additional time on major assessments.

“I was initially glad that even after this super tumultuous process, I was able to get the academic accommodations I needed. But later, the accommodations were precisely what made me rethink a lot about myself.”

Tristian, just under a week later, utilized his accommodation plan for a large summative math assessment; he was cleared to have about thirty extra minutes to complete the test.

“At first, I was very nervous, but as the test progressed, it became increasingly less difficult. I finished fifteen minutes within the regular testing time and spent my entire extended time just reviewing my answers without making any changes.”

Scores came out for the test a week later. Tristian was ecstatic, performing quite well – however, his success was credited to his accommodations, not his intelligence whatsoever.

“People told me that I got an easier version of the test because I had a disability and that the only reasons why I did well was because I had extra time. A lot of the other students just laughed and affirmed the ableist remarks he was making, and the teacher just stood there. I was alone, fighting with no one on my side.”

The rest of the day was dismal.

“I went home and all I could think about was whether the education plan really was the only reason why I did well. Internally, I knew that I didn’t even need the accommodation for that test; but externally, those feelings were cancelled out by what my classmates said. I didn’t know what to think – confusion, anger, distrust, sorrow? I wished we were virtual where they couldn’t tell I had extra time on tests.”

Over the coming hours, his thoughts multiplied. He questioned his inherent worth, his ability, his intelligence. He was reminded of his childhood where his teacher forced him to sit outside of the class because of sensory difficulties instead of making accommodations.

And this is the unfortunate reality for so many students with disabilities. Ableist perceptions of disabilities result in high levels of stress and concerning introspective thoughts, which in turn, often damage one’s mental health – mental health and disabilities cannot, and should not, be viewed as two separate entities. Often when forced to remain silent about their experiences, people with disabilities fall victim to a vicious cycle of introspection that can, at times, become toxic and harmful.

“Ableist remarks make an environment of shame, and so I can’t openly talk about what I feel which impacts my mental health. Like yesterday, someone said the r-slur as a joke and that really hurt me.”

Students, adults, and administrators also all tend to use euphemistic terms like “differently-abled” and “special needs” – merely a performative façade of support. They must learn how to confront the word “disability” and take meaningful steps to prevent the topic from becoming even more taboo. Disabilities have historically been taken out of the equation – other identities like race, gender, and sexuality are frequently explored through the lens of mental health, yet the disabled identity has been vastly understudied. Surveys that explore this tie prove what anecdotal accounts indicate — those with disabilities experience mental health distress at levels five times those of people without disabilities.

“I just don’t understand why even though we [those with disabilities] are the largest marginalized group, we’re still minimized. When people aren’t educated about anti-ableist vocabulary and are able to excuse themselves from engaging in raw dialogue, a culture of underground ableism is built.”

And what’s worse is that Tristian is not a student from any local high school. He attends IMSA. Stigma and ableist perceptions against those with disabilities most definitely exist here at IMSA. Results from a survey conducted by Peer Multicultural Educators’ Disability Equity Project finds that out of thirty-two respondents, only three knew how to obtain an education plan and nineteen identified at least one location on campus that would be physically inaccessible. Focus groups conducted by this group reveal similar insights — students feel uncomfortable because of the continual marginalization of their identity (given that their experiences are hardly included in IMSA’s Equity and Excellence Plan).

A separate student at IMSA (who chose to remain anonymous) also had some thoughts on the issue.

“We do so much at this school about equity and I’m so thankful we do that. But we certainly don’t do enough — why don’t we have diversity training about disabilities? Why don’t we have special presentations on how to not use ableist terminology? Are our struggles less important than the struggles of other groups? Disabilities have to be more strongly considered.”

IMSA, as an institution, places heavy emphasis on equity and mental health, both of which are critical aspects of a student’s success. But for students, like Tristian, discussing the experiences of disabled students is a prerequisite to achieving both — students with disabilities, at IMSA and beyond, look for stigma-breaking dialogue and action. They look for an environment where their thoughts are not shuttered; an environment where high academic performance is not credited to an accommodation; an environment where ableist terms are not frequently thrown around in hallways without any sort of disciplinary recourse. Only through holding these courageous conversations, recognizing the unique experiences of disabled students, and implementing change are equity and mental health truly attainable.